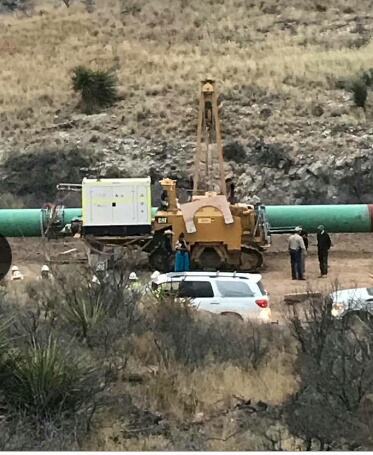 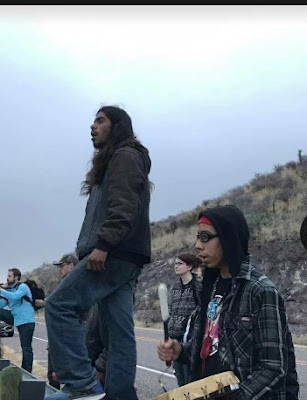 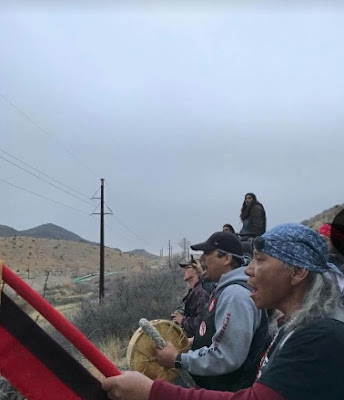 Saturday January 14, 2016 Frankie Orona, Society of Native Nations
Lori Glover, Big Bend Defense Coalition
Two Texas Water Protectors Lock Down Onto Heavy Machinery Halting Construction of Trans-Pecos Pipeline For Several Hours
Concerns raised about off-duty Presidio County Sheriffs working private security for pipeline company Energy Transfer Partners
SHAFTER, TX - Two Texas Water Protectors were arrested today at a Energy Transfer Partners Trans-Pecos Pipeline construction site in Big Bend country near the Shafter ghost town. Approximately 20 Water Protectors participated at the construction site near the eastment site while work was halted and law enforcement arrived.
As several water protectors prayed, sang songs and chanted, Loretta Glover, Alpine resident and Big Bend Defense Coalition founder and Madelein Santibanez, with Society of Native Nations locked down to a sideboom, a yellow crawler like bulldozer with a derrick used to lower long sections of a 42-inch pipe into the ground and prevented work from continuing. Both women were charged with a misdemeanor in trespassing and were booked at a Marfa jail.
Energy Transfer Partners and CEO Kelcy Warren are behind the Dakota Access Pipeline in North Dakota and the Trans Pecos and Comanche Trail Pipelines in West Texas. Operations for the Trans-Pecos Pipeline are still ongoing and not all pipelines have been buried underground.
"We will continue to fight against the oil & gas industry and their political and environmental terror directed against the rights of the people," said Glover in handcuffs as she was marched away from the site.
This is the third act of civil disobedience by water protectors in the past few weeks. Alpine resident, Mark Glover and Society of Native Nations member, Jakki Hagans were arrested on January 7th for locking themselves to pipeline equipment. The Presidio County Sheriff's Department (PCSD) coordinated the arrests and was assisted at the action by officers with the US Border Patrol. PCSD representatives informed several witnesses that many off-duty sheriffs are also working private pipeline security for Energy Transfer Partners.
"Water protectors of the world unite!" Yelled Santibanez from her lockdown position.
The Water Protectors have expressed multiple concerns with the construction of the Trans Pecos Pipeline. Energy Transfer Partners has repeatedly ignored community concerns over Native American Sacred Sites and proper consultation; protection of drinking water as well as the Rio Grande River; protection of critical habitat and a refusal to conduct a full Environmental Impact Statement. The opponents are also opposed to the taking of private land by eminent domain.
Glover, a member of the Big Bend Defense Coalition, and Santibanez are both participating at the Two Rivers Camp, an encampment styled after the NO-DAPL brigade in North Dakota.
Society of Native Nations(SNN)-is a Non-Profit 501(C)(3) Organization and was founded to fulfill the express mission of: Helping to protect, preserve the way of life, culture, spirituality, teachings and medicines of the Native indigenous people of North and South America.
Drone footage of the action by Louis Candelas Moncivias  "Drone Footage 1/14/17 Action #NoTPPL US 67 South Presidio County
https://www.facebook.com/louismoncivias1/videos/10211734872788065/
Images: