President Donald Trump issued executive orders removing obstacles to the construction of both the Keystone XL and Dakota Access pipelines on Tuesday morning."The construction will be 'subject to terms and conditions to be negotiated by us,'” Trump said, citing as an example the need for pipe components to be built in the US. More at RT: https://www.rt.com/usa/374942-trump-dakota-keystone-approval/
Standing Rock Oceti Sakowin Camp Calls for Mass Civil Disobedience: 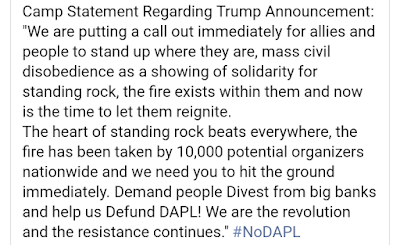 The Medic Healer Council at Standing Rock Camp responded immediately to Trump signing the executive orders to push through DAPL and KXL, issuing a call for more volunteers for the Medic Healer Council at the camp of water protectors. Hundreds of water protectors remain at the camp, and continue to resist the Dakota Access pipeline from a crude oil pipeline under the Missouri River, which could poison the water source of millions.The Medic Healer Council said, "The Trump administration’s decision to push forward with KXL and DAPL is disheartening but expected in light of the months of militarized oppression that Standing Rock and the NoDAPL movement has faced, even under a progressive president. We will continue to stand with Water Protectors locally and globally in the intersectional fight for our waters, our lands, and our people."
"The Medic Healer Council remains committed to protecting the protectors. We call on this administration to stop permitting and perpetuating this systemic violence against us and those who stand with us. We call on our relations to join us in our stand with the Water Protectors and against DAPL."The Women's Earth and Climate Action Network said immediately, "Donald Trump signed an executive order pushing forward the Dakota Access pipeline and Keystone XL pipeline.We are devastated, but not surprised by this news, and stand ready to take action with all of our allies standing with great strength and courage on the frontline of this vital struggle."
At approximately 11am EST, President Trump signed five executive actions in Washington, two of which will advance construction of the controversial Keystone XL and Dakota Access pipelines. The other three memorandums will serve to expedite environmental reviews for high priority projects.
Tom BK Goldtooth, Executive Director of the Indigenous Environmental Network issued the following statement immediately: “The Indigenous Environmental Network is extremely alarmed with President Donald Trump’s announcement of the two Executive Orders setting the stage for approving the dirty energy pipeline projects of the TransCanada Keystone XL pipeline and the Dakota Access Pipeline. "The Standing Rock Sioux Tribe and other Sioux Tribes, as sovereign Native nations, were never consulted by Trump or his Administration on this decision that further violates the treaty rights of the Lakota, Nakota, Dakota people. Trump is portraying his true self by joining forces with the darkness of the Black Snake pipelines crossing across the culturally and environmentally rich landscape of the prairie lands of America," Goldtooth said."These actions by President Trump are insane and extreme, and nothing short of attacks on our ancestral homelands as Indigenous peoples. The actions by the president today demonstrate that this Administration is more than willing to violate federal law that is meant to protect Indigenous rights, human rights, the environment and the overall safety of communities for the benefit of the fossil fuel industry.
"These attacks will not be ignored, our resistance is stronger now than ever before and we are prepared to push back at any reckless decision made by this administration.  If Trump does not pull back from implementing these orders, it will only result in more massive mobilization and civil disobedience on a scale never seen of a newly seated President of the United States," Goldtooth said.The news video of Trump signing bills to expedite Keystone and DAPL pipelines can be viewed at.http://insider.foxnews.com/2017/01/24/trump-signs-5-executive-orders-says-scotus-pick-will-come-next-weekCheck back for updates at Censored News.
Please send statements to brendanorrell@gmail.comwww.bsnorrell.blogspot.com
at January 24, 2017 3 comments: