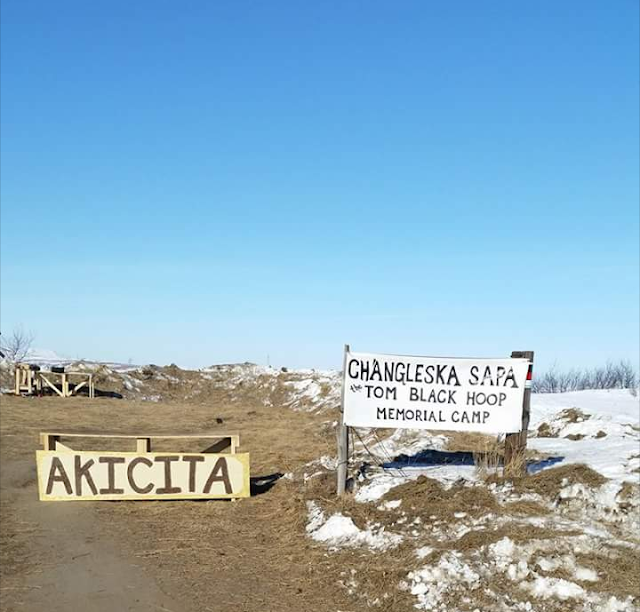 The Tom Black Hoop Memorial Camp was established in direct response to the concerns the people of Cannon Ball expressed and to assuage concerns directly expressed by the members and residents of the Standing Rock Sioux Tribe Reservation.The Standing Rock Sioux Tribe recently passed resolution 007-17 saying that they will use federal agents to close all water protector camps. However, we the grassroots people of Standing Rock stand united in prayerful action to stop Dakota Access Pipeline as it’s a direct threat to the drinking water of our tribe, our sister tribes to the south along the Missouri River and to 17 million people down river who need clean water to live and survive. Most of the bad elements have left camps. We encourage SRST to gather evidence based on law not gossip to prove bad men but saying one person making death threats, or a few people doing drugs is going down a slippery slope argument. All our communities on Standing Rock have meth, alcoholics, and other bad men, are we going to condemn all our people because of societal ills and colonization? We are fighting colonization. The call to help Standing Rock started in a basement in McLaughlin SD on the Standing Rock Sioux Tribe. This movement has always been grassroots led. We the grassroots of Standing Rock put out a call for help and our relatives from the Keystone XL pipe answered the call.They called on their youth, and the youth answered the call and came to our meetings.We are not allowing alcohol, or drugs,or firearms and no tolerance for violence. We are going to a traditional set up for the camp, taking only the best that has been learned over these months and using that to move forward in a good, prayerful way. We are providing shelter for women, children, elders. And families that have left everything behind to stand with us.We do believe in Non violent direct action, but prayer first and for most and that is what will move us forward. The spirits told us to move to higher ground we are following what ceremony told us to do, tmove to higher ground, to return to our traditional ways and be prayerful. We have created a council and one PayPal, please share and give if you can www.paypal.me/blackhoop