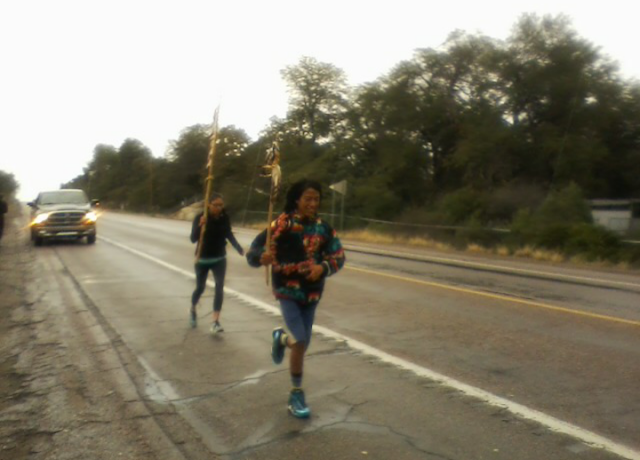 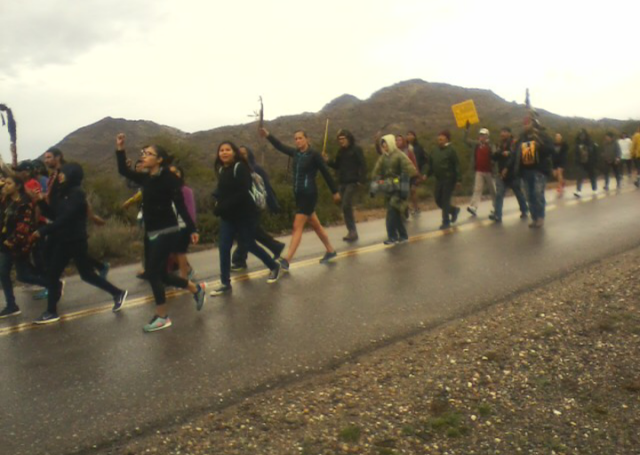 Oak Flat Runners Today at the Apache Stronghold Weekend Gathering.
Thank you to Lee Ann Labar for sharing your photos with Censored News.

CANNON BALL, North Dakota -- BIA officers and other law enforcement were stationed at the entrance to Sacred Stone Camp on Friday afternoon, Feb. 17, 2017, as shown in this video. Sacred Stone, located on the land of LaDonna Allard, is the original camp created in the spring of 2016.
The BIA said this week that the Standing Rock Sioux Tribal Council requested the BIA to serve eviction notices to everyone in the camps.
LaDonna Allard was served with an eviction notice this week. It states those present had 10 days to show why they should not be found in trespass. The eviction notice states that all property could be seized if those present are found to be trespassing.
Allard reminded the Standing Rock Sioux Tribal Council, that it authorized the camp when it passed a resolution of support on June 8, 2016.
"They are wrong. Maybe Tribal Council forgot they passed a resolution to support Sacred Stone," Allard said in a video statement on Thursday night.
Last summer, tribal leaders from across the country, and the world, came to the camps and presented Standing Rock Chairman Dave Archambault with gifts. They also presented the Standing Rock Sioux Tribe with money to support the camps.
On December 4, Chairman Dave Archambault began telling those in the camps to leave. This came during a blizzard, and many people were stranded.
At that time, it was believed that the Army Corps of Engineers permit would delay the Dakota Access Pipeline drilling under Lake Oahe.
The Standing Rock Sioux Tribal Council passed a resolution in January to "reallocate" $3.2 million of the funds donated for the camps, for its own use.
The Trump administration has now made it a priority to push construction of both the Dakota Access Pipeline, and the Keystone XL pipeline.
This week, the BIA served eviction notices. On livestream, BIA personnel said the BIA was serving the eviction notices after being requested to do so by the Tribal Council.
Several hundred water protectors remain camped along the Cannon Ball River to defend the Missouri River from Dakota Access Pipeline.
As the snow melts, cleanup has been underway in the camps and water protectors have been moving to higher ground. The cleanup at Oceti Sakowin was 70 percent complete on Friday, with the hard work underway of chopping away the ice and snow built up around teepees and tents.
At the roadblock on Hwy 1806, water protectors are not being allowed to continue on to the camps if they have sleeping bags or other camping gear, or building supplies, in their vehicles.
Please check back for more updates, and watch the video below from Friday afternoon, at the entrance to Sacred Stone Camp.