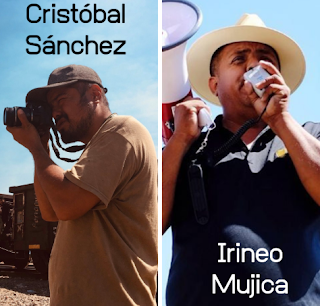 TUCSON -- After threatening devastating tariffs on Mexico's goods, Trump announced Friday that the US and Mexico reached an agreement. Trump said Mexico agreed to  buy large quantities of US farm produce -- a move that will be devastating for Indigenous and other farmers. Trump said Mexico agreed to take action to halt migrants from entering the United States.
The howling tweeter Trump -- making no mention of the fact that he is the descendant of migrants, and the First Lady is a migrant -- made the announcement on Friday, after two leading migrant caravan leaders were arrested in Mexico on Wednesday.

On Wednesday, Mexico's media reported, "Cristóbal Sánchez and Irineo Mujica were arbitrary detained on June 5 in Mexico City and Sonora, respectively on fabricated charges of human trafficking. Cristóbal Sánchez was detained outside his house in Xochimilco, Mexico City, at gunpoint and without a warrant by 6 men in plain-clothes that identified themselves as judicial police. In Sonoyta, Sonora, Irineo Mujica was detained by three officers in plain-clothes who handcuffed him and took him to Hermosillo, Sonora. The arrests of these Human Rights activists, just minutes apart, comes after several days of threats from Donald Trump to increase tariffs on Mexican goods, if Mexico does not take steps to detain Central American migrants and refugees who are seeking safety in the United States."

"Both Cristóbal and Irineo have been victims of harassment, criminalization and threats by different administrations of the Mexican government, including the current government of President Andrés Manuel López Obrador, as well as by organized crime groups. Only in February this year, prior to a meeting with the former US former Secretary of Homeland Security Kristen Nielsen, Sánchez Cordero publicly attacked the humanitarian work of Sánchez and Mujica, leading to harassment and several death threats against them and other human rights activists." Read more

Trump, continuing his ridiculous pattern of tweeting matters of international crisis, tweeted on Saturday: "MEXICO HAS AGREED TO IMMEDIATELY BEGIN BUYING LARGE QUANTITIES OF AGRICULTURAL PRODUCT FROM OUR GREAT PATRIOT FARMERS!"
CNN reports: 'A declaration amid a crisis'
The United States and Mexico signed onto a joint declaration as a result of the negotiations. The State Department said in a statement that as part of the agreement, Mexico will take "unprecedented steps" to increase enforcement to curb irregular migration, including the deployment of its National Guard throughout the country -- giving priority to Mexico's southern border.
The countries also agreed that individuals caught crossing into the US from Mexico seeking asylum will be "rapidly returned" to Mexico where they will await consideration of their asylum claims. Mexico, the declaration says, will authorize the entrance of all of those individuals. Mexico says it will offer jobs, health care and education to those people. In return, the US must expedite the asylum adjudication process...
Read more in CNN article

However, the New York Times reports that much of the agreement had already been reached, before Trump's boastful screeching tweets. Mexico had already agreed to deploy its National Guard to halt migration, focusing on the southern border.

Publisher's note: Who's the coyote now?
Alternate words for 'howling,' as the Thesaurus tells me, are braying, trumpeting, cackling, screeching, and caterwauling, Since howling refers to coyotes, I've decided on howling for the headline. Then there's braggart, boaster, an exaggerator, bullshitter, blowhard, gasbag, windbag, and crowing, according to Roget's Thesaurus.
By the way, 'caterwauling' means to "make a shrill howling or wailing noise like that of a cat." And braying refers to a donkey or mule, and to speaking or laughing loudly and harshly.