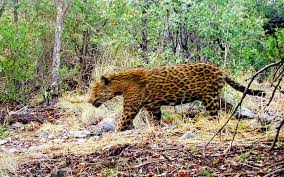 By Center for Biological Diversity

WASHINGTON — Conservation groups today sued the Trump administration for taking $7.2 billion from the Department of Defense for border wall construction without congressional approval. The planned barriers will wall off all remaining jaguar corridors along the U.S.-Mexico border.

Today’s lawsuit also challenges six waivers that sweep aside dozens of environmental and public health laws to fast-track wall construction in California, Arizona, New Mexico and Texas. The suit was filed in U.S. District Court in Washington, D.C., by the Center for Biological Diversity, Defenders of Wildlife and the Animal Legal Defense Fund.


“Trump’s assault on the U.S. Constitution has reached new heights as he turns the borderlands into sacrifice zones,” said Brian Segee, a senior attorney at the Center for Biological Diversity. “He’s done an end-run around Congress and completely overstepped his authority to declare a so-called emergency. Meanwhile jaguars and other rare wildlife along the border are being pushed a step closer to extinction.”

In February the Trump administration announced 31 border wall projects totaling 177 miles using funds that Congress appropriated to the military for other purposes. The projects will largely wall off the remaining unfenced areas in California, Arizona and New Mexico, including key corridors for jaguars and ocelots.

“Construction of a wall that cuts through the heart of vitally protected refuges, forests and conservation areas will have devastating effects on wildlife, such as jaguars, Mexican gray wolves and ocelots, who call the border their home,” said Animal Legal Defense Fund Executive Director Stephen Wells. “Using national emergency powers to fund construction of a border wall is illegal and misguided, particularly when the nation is currently facing a real national emergency stemming from the type of outbreak that occurs from disrupting the natural world.”

In February 2019 the groups sued the administration over the president’s emergency declaration to pay for his border walls. Both lawsuits argue that the president violated the U.S. Constitution by overstepping his executive authority and sidestepping Congress to fund wall construction along the southern border.

“This latest construction proposal would block critical cross-border wildlife corridors and permanently impede recovery efforts for endangered species like the Mexican gray wolf and jaguar,” said Jason Rylander, senior counsel for Defenders of Wildlife. “These areas are home to some of the last remaining undisturbed habitat for wildlife and walling them off would push these species to the brink of extinction. Defenders will continue to fight for the protection of the rule of law against reckless decisions that put our communities and wildlife at risk.”

Trump has taken more than $13 billion from the Department of Defense to build border walls. Today’s lawsuit challenges Trump’s fiscal 2020 transfer, which circumvents Congress’s rejection of his proposed border wall funding and renews his 2019 emergency declaration.

Presidents have declared at least 58 states of emergency since Congress passed the National Emergencies Act in 1976 and dozens are still in effect. None of the laws that can be used to trigger use of the act involve immigration or border wall construction. And none of those laws allow reallocation of previously appropriated funds to border wall construction.

The Center for Biological Diversity, Defenders of Wildlife and the Animal Legal Defense Fund also sued the Trump administration to challenge waivers that sweep aside public health and safety laws to speed construction of border walls from the Pacific Ocean to the Rio Grande Valley. A petition asking the U.S. Supreme Court to review federal court rulings in those cases is pending.

Beyond jeopardizing wildlife, endangered species and public lands, the U.S.-Mexico border wall is part of a larger strategy of ongoing border militarization that damages human rights, civil liberties, native lands, local businesses and international relations. The border wall impedes the natural migrations of people and wildlife that are essential to healthy diversity.

The Animal Legal Defense Fund was founded in 1979 to protect the lives and advance the interests of animals through the legal system. To accomplish this mission, the Animal Legal Defense Fund files high-impact lawsuits to protect animals from harm; provides free legal assistance and training to prosecutors to assure that animal abusers are punished for their crimes; supports tough animal protection legislation and fights harmful legislation; and provides resources and opportunities to law students and professionals to advance the emerging field of animal law. For more information, please visit aldf.org.

Defenders of Wildlife is dedicated to the protection of all native animals and plants in their natural communities. With over 1.8 million members and activists, Defenders of Wildlife is a leading advocate for innovative solutions to safeguard our wildlife heritage for generations to come. For more information, visit newsroom.defenders.org and follow us on Twitter @DefendersNews.