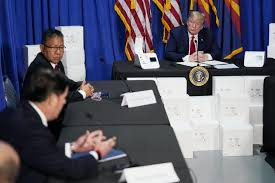 The FDA issued an alert about the rapid coronavirus tests that Trump brought to the Navajo Nation at the Native Roundtable. The Indian Health Service has been using the Abbott tests since early April, which are delivering false results, resulting in the spread of the virus.

The FDA issued a warning about the Abbott rapid coronavirus tests issuing false results, which results in people believing they do not have the virus when they do. These false tests increase the spread of the virus.

For those who took the Abbott rapid coronavirus test and received a negative result, and are having symptoms, then the CDC recommends you retest. The test has an up to a 50 percent fail rate. This will help decrease the spread.


These are the rapid tests that Trump gave the Navajo Nation during the Native Roundtable in Phoenix. IHS has been using these rapid tests since April in many locations.

President Trump gave the Navajo Nation rapid Abbott coronavirus test kits during the Native Roundtable in Phoenix on May 5. Indian Health Service has been using these tests since early April. The White House said in April that it was a priority to give the Abbott tests to IHS.

On Wednesday, May 20, the Navajo Nation said there were 82 new cases of COVID-19, two more deaths. The total number of cases is 4,153 and 144 deaths. There have been 1,001 recoveries reported, the Navajo President's Office reported.

The FDA issued an alert about the test issuing false results. The test recently come under fire after studies have indicated that it produces too many false negatives. A study this week from NYU Langone Health found that the Abbott test returned false negatives for nearly 50 percent of certain samples that a rival test had found to be positive.

The FDA now says patients with negative results from the Abbott test may need to be retested with a more sensitive test.

The question now is where the Navajo Nation and Indian Health Service facilities will re-test those who tested negative with the Abbott test. 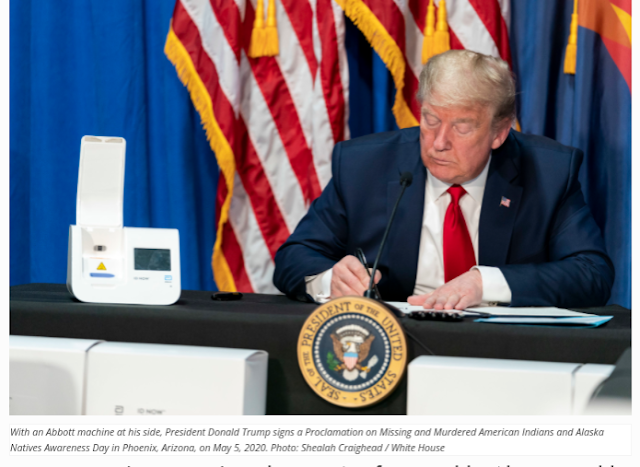 Trump's words to Navajo Vice President Myron Lizer, from the White House transcript on May 5 at Honeywell in Phoenix, were:

PRESIDENT TRUMP: So we’re doing that. I think we have a thousand cartridges, too. A thousand for a thousand tests. So hopefully that’ll be — that’ll be helpful to you. Okay?

During a Town Hall on April 21, Navajo President Jonathan Nez said, "It takes many of these tests just to calibrate one."

President Nez said the Abbot machine relies on proprietary testing supplies that can only be obtained from the company. At the time, the kits were on backorder.

The Oyate Health Center in Rapid City, South Dakota, also reported similar problems with these tests for the coronavirus.

Navajo Nation map of coronavirus cases currently. Chinle area, which includes Hard Rock, Black Mesa, Tachee, Pinon, Whipporwill, Many Farms, Tsaile, Chinle, Rough Rock, Lukachukai, Tselani, and Nazlini, has 902 cases. The next highest numbers are in the areas of Gallup/Ramah/Alamo New Mexico; followed by the Kayenta, Arizona area which includes Oljato and Navajo Mountain, Utah; and the Shiprock, New Mexico, which is the northeastern region of the Navajo Nation. https://www.ndoh.navajo-nsn.gov/COVID-19?fbclid=IwAR0pMbO_Ssf-RgDG64ovhEqWg4BnOp4B_vfninItxgcEP1w_KtE_ne9vWr4 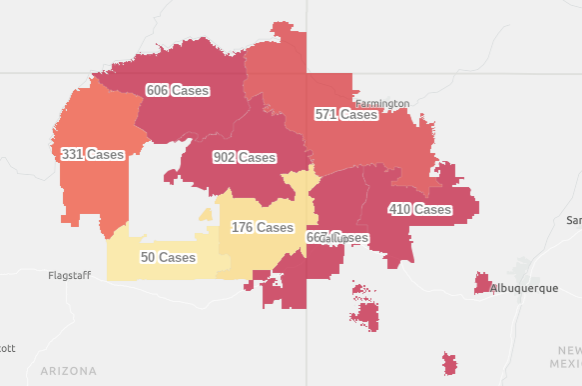 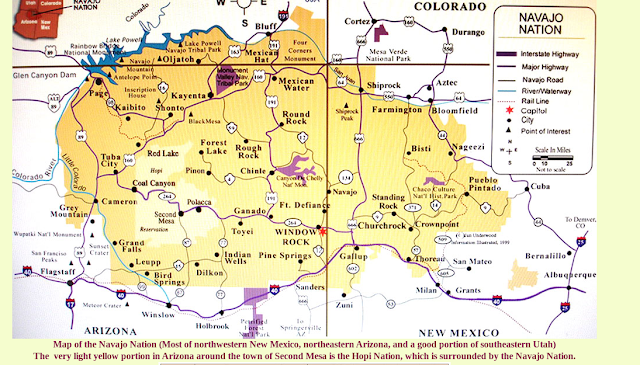 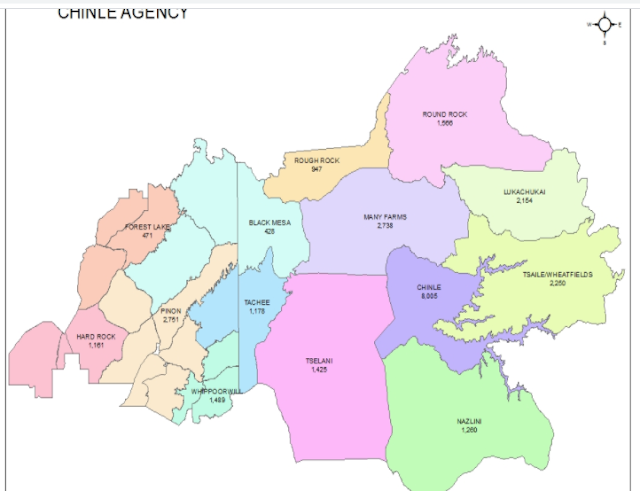 A registered nurse who works in ICU described the coronavirus tests to Censored News.

"So the Abbott testing only collects from the nasal or nose. The swab goes in the nares and gets swabbed around. The virus attaches much deeper than that. So the swab really needs to go farther into the nasopharyngeal area -- deeper into your sinuses. That is where the virus really lives and likes that area. It is in the nose area but minimal cells are there to catch when the swabbing is done."

The nasopharyngeal testing has higher accuracy, the nurse said.

As for testing with blood samples, the nurse said they are releasing the serology test soon that will be blood for antibodies. These tests will show if you had it.

"It takes a good month to develop antibodies so it is not an accurate measure to determine if one has COVID-19 at the time of symptoms."

On April 6, more than a month ago, the White House said IHS was given priority to these tests.

Rapid point-of-care coronavirus tests will be used to support areas of the country with the least access to testing, as well as nursing homes, White House coronavirus coordinator Deborah Birx told reporters.
Priority will be given to the Indian Health Service and rural areas that do not have access to labs that perform high-volume coronavirus tests, she said.

The United States began purchasing the tests and giving those to IHS in April, according to an April 6th statement.

"The U.S. Department of Health and Human Services is purchasing the ID NOW COVID-19 rapid point-of-care test, developed by Abbott Diagnostics Scarborough Inc., for state, territorial and tribal public health labs. The ID NOW COVID-19 test is performed on the ID NOW device. This test allows for medical diagnostic testing at the time and place of patient care, provides COVID-19 results in under 13 minutes and expands the capacity for coronavirus testing for individuals exhibiting symptoms as well as for healthcare professionals and the first responder community. Additionally, this will save Personal Protective Equipment (PPE) and ensure our critical workforce is safe and able to support the response, as only gloves and a facemask are necessary to administer this rapid point-of-care test." 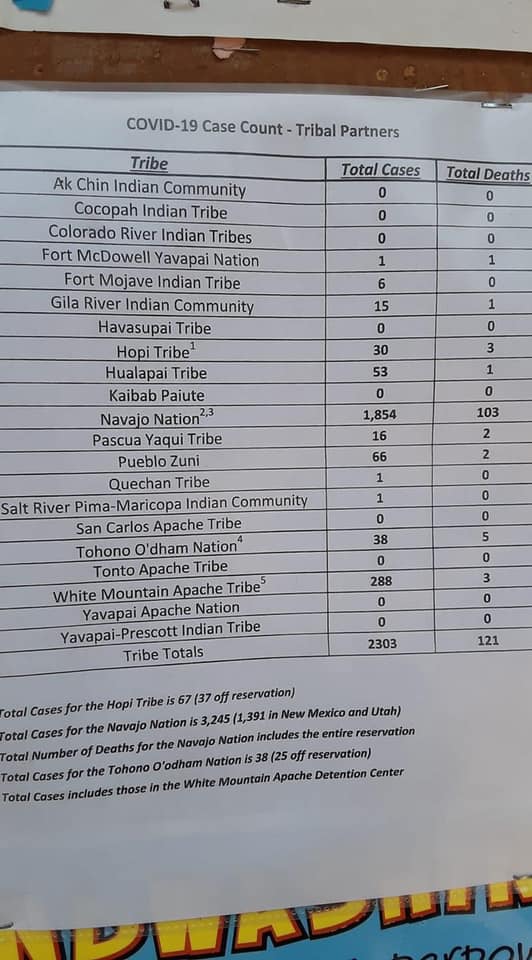 The Indian Health Service report for May 18 shows the increase in cases on the Navajo Nation, Phoenix and Albuquerque IHS service units. https://www.ihs.gov/coronavirus/ 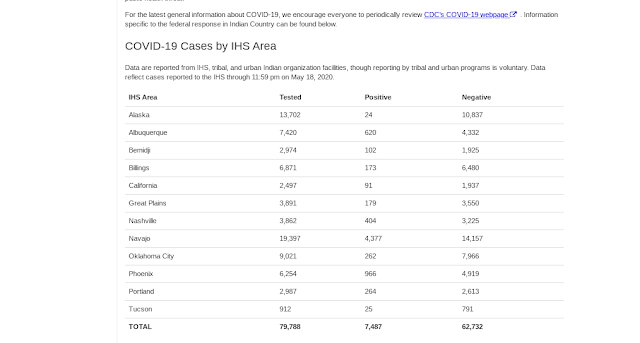 FDA's statement on May 14
Today, the U.S. Food and Drug Administration is alerting the public to early data that suggest potential inaccurate results from using the Abbott ID NOW point-of-care test to diagnose COVID-19. Specifically, the test may return false-negative results.

“We are still evaluating the information about inaccurate results and are in direct communications with Abbott about this important issue. We will continue to study the data available and are working with the company to create additional mechanisms for studying the test. This test can still be used and can correctly identify many positive cases in minutes. Negative results may need to be confirmed with a high-sensitivity authorized molecular test,” said Tim Stenzel, M.D., Ph.D., director of the Office of In Vitro Diagnostics and Radiological Health in the FDA’s Center for Devices and Radiological Health.
FDA News Release: Coronavirus (COVID-19) Update: FDA Informs Public About Possible Accuracy Concerns with Abbott ID NOW Point-of-Care Test

The FDA is sharing early information available about potential inaccurate results in the spirit of transparency. The agency has been working with Abbott to analyze the information gathered to date and has worked with the company on a customer notification letter to alert users that any negative test results that are not consistent with a patient’s clinical signs and symptoms or necessary for patient management should be confirmed with another test.

The FDA looks at a variety of sources to identify and understand potential patterns or significant issues with the use of the Abbott test. No diagnostic test will be 100% accurate due to performance characteristics, specimen handling, or user error, which is why it is important to study patterns and identify the cause of suspected false results so any significant issues can be addressed quickly.

The agency is aware of some scientific studies that have identified accuracy issues with Abbott ID NOW and is investigating whether it could be due to the types of swabs used or the type of viral transport media (material used to transport the patient’s specimen). While there is important information to gather from these studies, it should be noted these studies have limitations, including small sample size, potential design biases, or tests that may not have been executed according to the manufacturer’s instructions for use, an important part of scientific research. This is why external scientific studies are one part of the FDA’s overall evaluation of diagnostic performance.

The FDA has received 15 adverse event reports about the Abbott ID NOW device that suggest some users are receiving inaccurate negative results. The agency is reviewing these reports. It’s important to note that the adverse event reports the FDA receives from manufacturers, health care providers, health care facilities, and patients can be incomplete, inaccurate, or unverified, so agency staff must meticulously comb through the reports to identify crucial data to support any signals or patterns about device use.

Moving forward, Abbott has agreed to conduct post-market studies for the ID NOW device that each will include at least 150 COVID-19 positive patients in a variety of clinical settings. The FDA will continue to review interim data on an ongoing basis. The information gathered from the post-market studies can further help the agency understand the cause or patterns of any accuracy issues and inform any additional actions the company or the FDA should take.

The FDA will keep working with Abbott to further evaluate these accuracy issues and will publicly communicate any updates.

Consumers or healthcare providers can reach Abbott directly at (224) 667-6100 or by emailExternal Link Disclaimer.

The FDA, an agency within the U.S. Department of Health and Human Services, protects the public health by assuring the safety, effectiveness, and security of human and veterinary drugs, vaccines and other biological products for human use, and medical devices. The agency also is responsible for the safety and security of our nation’s food supply, cosmetics, dietary supplements, products that give off electronic radiation, and for regulating tobacco products.

After being touted by the Trump administration, Abbott announced five days ago, on May 11, that is shipping 30 million tests globally:

"Abbott announced today that the U.S. Food and Drug Administration (FDA) issued Emergency Use Authorization (EUA) for the company's SARS-CoV-2 IgG lab-based serology blood test on the Alinity™ i system. Abbott plans to ship nearly 30 million antibody tests globally in May across its ARCHITECT® and Alinity i™ platforms and will have the capacity for 60 million tests in June," according to Abbott's press release.

The Abbott tests are also placing lab workers at high risk from contamination through the air.

The Siege of Fort Pitt took place during June and July 1763 in what is now the city of Pittsburgh, Pennsylvania, United States. The siege was a part of Pontiac's War, an effort by Native Americans to remove the British from the Ohio Country and Allegheny Plateau after they refused to honor their promises and treaties to leave voluntarily after the defeat of the French. The Native American efforts of diplomacy, and by siege, to remove the British from Fort Pitt ultimately failed.
This event is best known as an early instance of biological warfare, where the British gave items from a smallpox infirmary as gifts to Native American emissaries with the hope of spreading the deadly disease to nearby tribes. -- Wikipedia

Is this just Navajo Nation area IHS? Or ALL IHS?

Glenda, IHS has used these across the country, but it is unknown exactly which sites have used the Abbott tests. Please ask in your area. Thanks for commenting.