Medical masks sent to the Navajo Nation were part of a White House contract scam. The masks were secured by a former White House aide who obtained a contract with the Indian Health Service and purchased those from China, ProPublica reports.

"A former White House aide won a $3 million federal contract to supply respirator masks to Navajo Nation hospitals in New Mexico and Arizona 11 days after he created a company to sell personal protective equipment in response to the coronavirus pandemic," ProPublica reported on Friday.

The masks provided were Chinese-made KN95s, the Chinese alternative to N95s.

U.S. regulators said the first week of April that these offer inadequate protection.

On Friday, the Navajo Nation reported a total of 4,529 cases of coronavirus. There have been 149 deaths.

Navajo President Jonathan Nez said, “The Navajo Nation is testing our citizens at a very high rate per capita, more so than any state in the country."

"Over 14-percent of the people living on the Navajo Nation have been tested and that’s why we have a high number of positive cases. We’re doing our best to flatten the curve," President Nez said Friday.

Over the past 24 hours, there were 95 new cases of coronavirus and two more deaths, as the Navajo Nation began another 57-hour weekend-long lockdown. There have been 1,235 recoveries.

The mask purchasing scam follows the exposure that the rapid Abbott tests have a 50 percent fail rate. These tests have been used since April by Indian Health Service.

President Trump also gave Abbott tests to the Navajo Nation during a Native Roundtable in Phoenix on May 5.

President Trump's personal valet, a member of the U.S. Navy, tested positive for coronavirus the day after the Native  Roundtable in Phoenix.

Since the incubation period is 2 days to 14 days or longer, Trump's valet would have had the virus on May 5, during the Native Roundtable.

Trump did not wear a mask during the Native Roundtable. Although his valet has the virus, Trump did not quarantine. Instead, Trump has continued to meet with vulnerable populations without wearing a mask since that time.

The masks and rapid tests have both been used by the Navajo Nation and Indian Health Service.

IHS currently reports a rapid increase of the virus on the Navajo Nation, and in Phoenix and Albuquerque IHS service units spanning the Southwest. 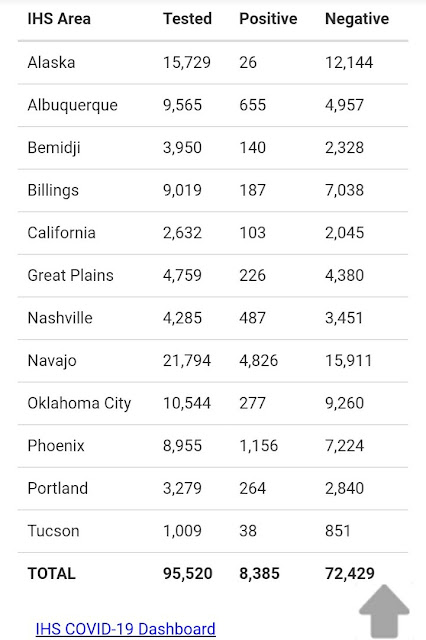 Check back for updates on this article.


Read the article at ProPublica