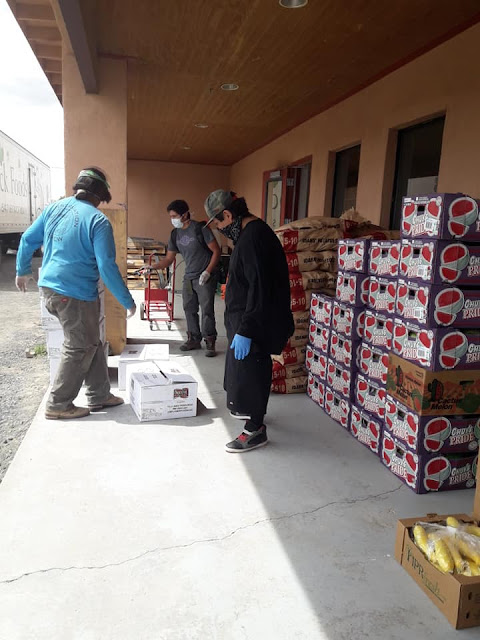 Unloading at Hotevilla community-building today. Been a long day but a good productive day.
Thanks to all the volunteers. -- Pamela Lalo, Navajo Hopi Families COVID 19 Relief. 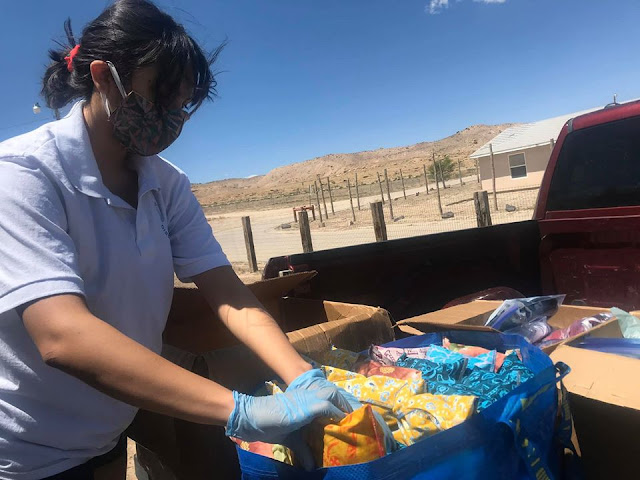 Days for Girls: The Days for Girls Stanwood Canano Island Chapter in Washington State donated girls hygiene kits. Thank you to the Kwek Society and Days for Girls for your solidarity! Special thank you to our Community Partner Delegate Amber Crotty for making this partnership happen. -- Navajo Hopi Families COVID 19 Relief.

WINDOW ROCK, Ariz. -- The Navajo Nation reported a dramatic increase in coronavirus cases during the past 24 hours, with 164 new cases, bringing the total to 2,141 cases, with nine more deaths. The largest number of cases is now in the bordertown of Gallup, New Mexico, where the mayor has asked the governor for a state of emergency.

As the coronavirus increased in the region, the grassroots Navajo Hopi Families COVID-19 Relief arrived on the Hopi Nation at Hotevilla with fresh food and supplies.

On the Navajo Nation, there are 164 new cases of COVID-19 and a total of 71 deaths as of Thursday. The total number of positive COVID-19 cases for the Navajo Nation has reached 2,141. A total of 12,023 COVID-19 tests have been administered with 8,639 negative test results.

“Our hearts are with the families of Corrina and Cheryl Thinn,” said Navajo Council Speaker Seth Damon. “Both sisters served the Navajo Nation on the front-lines for the health and safety of our communities. On behalf of the Navajo Nation Council, I extend my deepest condolences to the friends and family of Corrina and Cheryl, each taken by the coronavirus.” The sisters passed away in the month of April after battling the coronavirus.

On Thursday, the outgoing mayor of Gallup, N.M., requested Governor Michelle Lujan Grisham to issue a state of emergency for the city. Mayor Jackie McKinney says the request was made as a result of the COVID-19 outbreak within the city, causing deaths, stretched medical facilities and resources to their capacity, and impacted the welfare of the City of Gallup. McKinney says he wants to invoke the emergency powers set out under the Riot Control Act sparingly, KRQE reported.

The mayor says the city will collaborate with the governor’s office to provide specific restrictions necessary to address the crisis. He also noted in his letter to the governor that his official capacity as Gallup’s mayor ends Thursday at midnight and Mayor-Elect Louis Bonaguidi will be sworn in as mayor Thursday afternoon.

Navajo President Jonathan Nez said the largest number of cases are now in the bordertowns of Gallup and Farmington in New Mexico.


“Nine more deaths is very disheartening, but we have to remain strong and remember that we will get through this pandemic. We will continue praying for all of the families that have lost their loved ones. There’s a big spike in positive cases today, but the upside is that there is a lot more testing being conducted and that’s why we’re seeing high numbers. Those who test positive will soon be able to isolate themselves at one of the Alternative Care Sites and this will help to flatten the curve. Let’s be strong and keep fighting together,” said President Nez, who added that the concentration of the virus has shifted from the western portion of the Navajo Nation to the eastern and northern regions, with “hotspots” in Farmington and Gallup, N.M.

President Nez said he fully supports the request for an emergency order for Gallup and is hopeful that it will help to prevent Navajo people from traveling to the border town.

On Thursday, the Nez-Lizer Administration continued distributing food, water, fire wood, masks, and cleaning and hygiene items to 212 families in the communities of Nageezi and Tiis Tsoh Sikaad, N.M. Precautions were taken as they placed the items in vehicles with no direct contact with the residents. Items were also delivered to elderly and high-risk residents who were unable to pick-up the items on their own, the President's Office said.

“Operation First of the Month will begin bright and early on Friday to put safety measures in place at Bashas’ Diné Market locations across the Navajo Nation, to help our Navajo elders shop and return home safely. Our staff and Division Directors will be on the ground helping in several communities and we will also continue distributing essential items to high-risk residents as well. Let’s stay home as much as possible and let’s continue to flatten the curve. Eventually, we will overcome COVID-19 with everyone’s help,” said President Nez.

Beginning on Friday at 8:00 p.m., the Navajo Nation’s 57-hour weekend curfew will go into effect requiring all residents to remain home with the exception of essential workers, including first responders, and in cases of emergencies. The Navajo Police will setup road checkpoints and issue citations to curfew violators as well.

“We don’t want any more of our people getting the virus and we don’t want any more grieving families. Please think of others, think of the families who have lost their sons, daughters, parents, and grandparents to COVID-19. Some people wonder when a cure or vaccine will be developed, but I believe we are the cure and the vaccine because we have the ability to rid our communities of the virus simply by staying home, practicing social distancing, and adhering to the advice of the health care experts,” said Vice President Lizer. 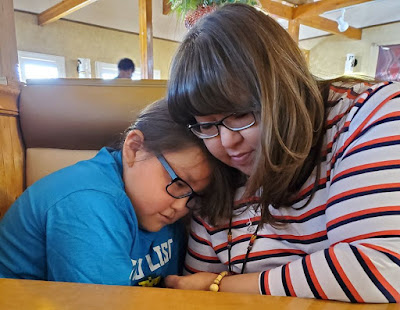 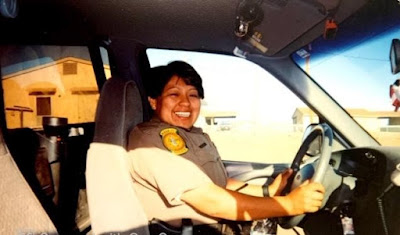 PHOTOS: Cheryl Thinn and her son. Corrina Thinn, former Navajo Nation Police Officer, in uniform and on-duty.  Corrina and Cheryl were sisters that both served as public servants to the Navajo People. Both sisters passed away in April 2020 from the coronavirus. (Photos provided by family.)

Corrina is survived by two sons, a grandson and a granddaughter.

“As Ni’hookáá’ Bíla’ashdla’ii Diyin Dine’é, we look to our heroes for the guidance and teachings — Dinéjí na’nitin — to lead lives of courage and purpose. Corrina and Cheryl Thinn are our heroes that have given their lives in the course of duty. We thank them and pray that their service and memory lives on through us,” stated Council Delegate Otto Tso.

Cheryl is survived by her son. His father also passed away in Jan. 2020.

“In the spirit of k’é, I call on all our relatives to honor Cheryl and Corrina for their service to the Navajo Nation and extend support to their families. They chose public service to protect and assist our families who were in critical need. Many of our heroes on the Navajo Nation are social workers and those who work on the frontlines as police or corrections officers. Their legacy will never be forgotten, and today we honor Cheryl and Corrina,” stated Council Delegate Amber Kanazbah Crotty.

Donations to assist the family with funerary arrangements can be made at the following website: https://www.gofundme.com/f/1zslem4f00.

Coronavirus in Indian country
The Indian Health Service shows the increase in coronavirus cases throughout Indian country, with the greatest number of cases in IHS service agencies of Navajo, Phoenix, Albuquerque, Oklahoma, Nashville and Portland. Alaska has completed the highest number of tests, outside of the Navajo agency. Alaska and Tucson service agencies each have the lowest number of cases, each have 16 cases. The Navajo Nation cases are currently 2,141 cases with nine deaths. https://www.ihs.gov/coronavirus/ 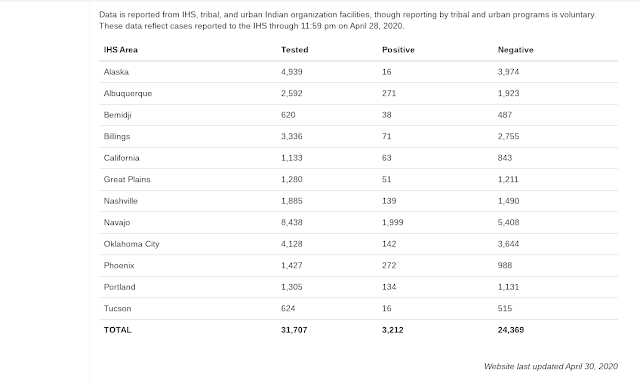