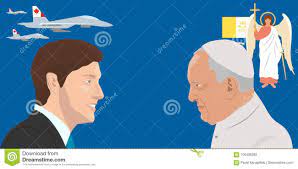 POPE: “YEAH, BUT MY APOLOGY IS BIGGER THAN YOURS!”

& THE POPE’S ADMISSION OF INDIGENOUS GENOCIDE CALLS FOR A

The Pope came last July 2022. Lots of commotion. In the plane that was bringing him back to the Vatican, a young journalist from kahnawake asked him about genocide. He ended up admitting that what happened to us was genocide. As far as we’re concerned the cross on top of tekanontak mount royal is an admission of genocide. The term ‘genocide’ has legal consequences. Such as removing genocide regimes in Rwanda, Germany, Srilanka, South Africa and now Canada.

The whole legal genocidal framework of Canada has to be done away with. Only kaianerekowa can protect us. We have a way of life that is real. We don’t have an illusion of freedom. The circle of the family wampum does not allow the power of an attorney to represent us. Everyone is sovereign, tewatatewennio. No one can speak for someone else. No one can make decisions for another. There is no power of attorney.

Judge Moore’s decision recognizes our way of self-representation. We are finally able to raise the issue of the murders of our children and their disappearances. The business plan for the corporation of Canada is to carry out the genocide of the onkwehonweh, the original people of turtle island, as if we never existed.