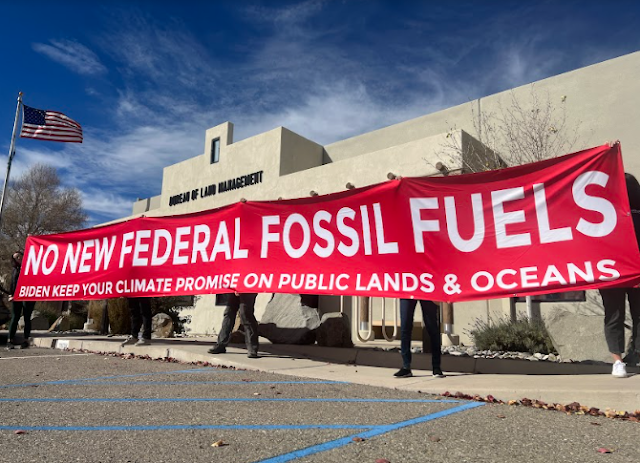 “No More Sacrifice Zones” - Groups Protest in Response to Bureau of Land Management Proposed Fracking Auction of More Than 260,000 acres in New Mexico, Wyoming, and Kansas

Sante Fe, N.M. - Adding to growing calls for President Biden to follow through on his promise to stop fossil fuel leasing on public lands, groups today delivered more protests in response to the Bureau of Land Management’s latest proposal to lease over 260,000 acres of public and ancestral tribal lands across Wyoming, New Mexico, and Kansas at its proposed May 2023 oil and gas lease sale.
.
In response to the short 30-day comment period deadline, advocates representing the Permian Basin Climate Justice Coalition and the Greater Chaco Coalition rallied in front of the Bureau of Land Management New Mexico Headquarters in Santa Fe to deliver over 20,000 public comments, thousands of pages of technical comments and exhibits, as well as a letter requesting an extension of the reduced public comment period.


“More oil and gas leasing is the exact opposite of what is needed to address the climate crisis. It furthers our dependence on fossil fuels while placing Black, Brown, Indigenous, and frontline communities at higher risk of harmful and unacceptable health and environmental consequences.” Miya King-Flaherty, Organizer for Sierra Club Rio Grande Chapter.


Thousands of organizations and communities across the U.S. have called on President Biden to halt federal fossil fuel expansion and phase out production consistent with limiting global warming to 1.5 degrees Celsius. Multiple analyses show emissions from existing fossil fuel projects have already pushed warming well past the threshold of climate catastrophe.


“Opening hundreds of thousands of additional public and ancestral tribal lands for more oil and gas drilling only serves to shackle regions such as the Permian for decades to come to boom-and-bust cycles that come with an oil-fueled economy,” said Kayley Shoup, Organizer for Citizens Caring for the Future. “Continuing a legacy of pollution and extraction zones is egregious at a time when addressing the impacts of climate change and investing in renewable energy should be a top priority.”


Over 3,000 acres of federal public land are being offered for auction in Eddy, Lea, and Chaves counties in southeastern New Mexico’s Permian Basin. The area is already known as a “climate bomb” where oil and gas development has more than quadrupled in the last decade, producing as much climate pollution as 24 coal plants. In New Mexico, 144,377 people, including 38,749 children, currently reside near or attend schools or daycares within a half-mile radius of active oil and gas operations.


“Continuing to lease our public lands for more oil and gas drilling proves President Biden is prioritizing Big Oil profits over future generations,” said Raena Garcia, Fossil Fuels and Lands Campaigner at Friends of the Earth. “Communities are knee-deep in climate catastrophe, with intensifying wildfires and hurricanes foreshadowing what’s to come if the fossil fuel industry keeps exploiting public lands. Biden must stop auctioning off our public lands if he wants to be the climate leader he claims to be.”


New Mexico is the fastest-warming and most water-stressed state in the continental U.S.; the oil and gas industry is flooding funds for political campaigns whilst contributing more than half of the state’s total greenhouse gas emissions. Supercharged by the warming climate, this year brought record-breaking fires and an unprecedented drought season not seen in over 1,200 years. For the first time in 40 years, the Rio Grande River went dry in Albuquerque.


“It’s long past time for our federal government to phase out oil and gas fracking and to prioritize our climate, environment, and public health above a profiteering industry that got us into the climate crisis in the first place,” said Rebecca Sobel, Organizing Director for WildEarth Guardians. “It’s imperative that the federal government end leasing on public lands if the Biden administration has any hope of meeting its climate goals and avoiding catastrophe.”


Click here to see a folder of materials delivered to BLM today >> https://drive.google.com/drive/u/1/folders/1kkKJxHvm02tqrn65Oyb01jxZ_g-WRU9A 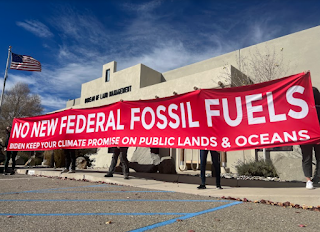