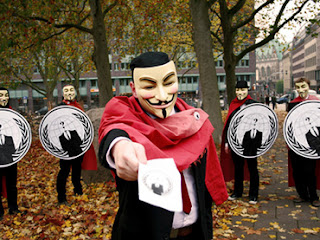 By RT news
Hacktivists are continuing their mission to take on politicians causing the collapse of constitutional rights in America, with operatives from the online collective Anonymous keeping up a campaign against the signers of controversial legislation.
As RT reported on Thursday, members of Anonymous began a campaign this week to expose information on the lawmakers who voted in favor of the National Defense Authorization Act for Fiscal Year 2012, a bill that will allow for the indefinite detention of American citizens, the reinstating of torture methods and the creation of the United States as a battlefield. Despite the implications of the act, the Senate allowed for the bill to leave Capitol Hill on Thursday, leaving only the inking of President Barack Obama’s name as the final step for ratification.
Read the story at RT:
http://rt.com/usa/news/anonymous-congress-ndaa-sopa-013/
at December 18, 2011 No comments:

The Arizona Snowbowl has been given approval by the U.S. Forest Service and the City of Flagstaff to use reclaimed water to make snow on the San Francisco peaks. Thirteen indian tribes consider the peaks to be sacred. These are the voices of some of those involved.
The Sacred Peaks from Kent Wagner on Vimeo.
at December 18, 2011 No comments: