The Launching: Chumash book is history and medicine

When the stories awaken, stories that heal

"Anthropologists have been at the service of colonialism." Chicana/Yaqui author Yolanda Broyles-Gonzalez speaking at launch of Earth Wisdom: A California Chumash Woman.

TUCSON -- Launching the book, Earth Wisdom: A California Chumash Woman, Yolanda Broyles-Gonzalez spoke with the magic of a storyteller, as she shared the stories of Pilulaw Khus, elder of the Northern Chumash Bear Clan, and co-author of the book.

Weaving beauty and truth, Broyles-Gonzalez spoke sharp words for the anthropologists who have attempted to divide and conquer the Chumash. She said the book opens the chasm of the violence and slavery that is part of California's unspoken history, and it offers the solace of the balm of healing.

Broyles-Gonzalez, Chicana/Yaqui author and professor in the Department of Mexican American Studies at the University of Arizona, launched the book tonight in partnership with the Native American magazine Red Ink.

"I want to thank Red Ink for their big hearts," she said. 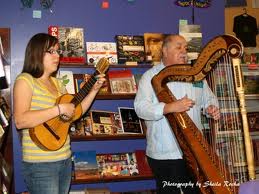 Broyles-Gonzalez began by recognizing the original spirit of the land and the original people of this land, the Tohono O'odham. She also honored the Yaqui elders and people who live here. Then she spoke on the spirit of the land and the struggle to protect the sacred lands of the Chumash people in central California. Although the region around Santa Barbara is known as a resort area to many, it is the sacred place of the Chumash. Just north of Santa Barbara is where the Chumash spirit begins its journey home.

"This is an extremely happy day," Broyles-Gonzalez said, adding that she had spoken with Khus on the phone three times today. "She is here in spirit," she said of Khus, who sent her greeting, "This is a very happy day for both of us."

There were also clear words for anthropologists.

At the popular Antigone Books on busy Fourth Avenue on Friday, Feb. 3, it was more than a book signing. Broyles-Gonzalez said it was a launching and the first time she has spoken on the book.
Broyles-Gonzalez, who went to high school here, spoke of what is happening to Arizona.

"Arizona seems to be going backward all the time," Broyles-Gonzalez said, pointing out that Mexican American Studies was recently prohibited at Tucson public schools. She said the book's launch brings sanity at this time and is to elevate environmental consciousness. It also means that Chumash will now occupy print culture.

"We dedicate this book to the seven generations."

"That is our prayer in putting this book into your hands."

Speaking at Antigone Books, a women's bookstore which operates on solar power, Broyles-Gonzalez described the assault on Chumash by anthropologists; anthropologists who attempted to define Chumash based on the mission's written roles. But not all Chumash were missionized, she said, pointing out that many fled the missions and went into the mountains.

With humility and grace, Broyles-Gonzalez told this story, and spoke of the art and gift of storytelling. She attended Tucson High School and Safford Middle School. Urging young people to tell their stories, she said, "I certainly never dreamed I would participate in writing a book."

"We need to tell our stories."

"I'm happy to see everyday there are so many dreamers in this town," she said of the students who walked out of Tucson middle and high schools in protest of the prohibition of Mexican American Studies.

She described the Chumash elder Khus, and co-author of Earth Wisdom, as a freedom fighter, medicine carrier and traditional ceremonial elder who will turn 80 years old this year. She is an activist for the spiritual way of life and human rights. Khus fought Wal-Mart and Chevron in the battles to protect Chumash lands.

To protect Point Conception, Khus and other Chumash occupied the land for one year. The 1978 Point Conception Occupation was a turning point in Khus’s life, as she battled a new natural gas facility there.

"If you have strong  enough hearts, you will prevail," Broyles-Gonzalez said.

Broyles-Gonzalez said the true history of California is one that is seldom written about, or spoken of. It is a history of violence and slavery. After California became a state, Indian people were hunted down and enslaved, or parents were killed and their children were stolen into slavery.

"Anthropologists have been at the service of colonialism." She said this book is about healing that history, healing it as one heals a wound.

This healing, too, comes from the land and all living creation. It is in the sea lions, the sun, and Mother Earth in Chumash lands, she said.

Broyles-Gonzalez said this country we live in was a land of abundance before the colonizers arrived. Indian people lived here for thousands of years, and then in just 200 years, the land, ocean and rivers became so polluted that one can no longer safely swim in the ocean or rivers.

She said it is good to become aware of the way society was, so it can be implemented again when the time comes.

Broyles-Gonzalez described how Chevron polluted one Chumash canyon to the point where people could not live there anymore. For ten years Khus fought Chevron in meetings. It was the same type of gas plant that was responsible for the tragedy in Bhopal, India in 1984.

Near this Chumash canyon is the Diablo Canyon nuclear reactor. "It leaks radiation," Broyles-Gonzalez said, pointing out the awareness that followed the tsunami disaster in Japan and the tragedies there.

During Khus long years of struggle to uphold the spiritual way of life, there was the year of occupation at Point Conception in 1978.

Khus, stressing the importance of this land north of Santa Barbara said, "That's our spirit's entry way into the next world."

"We have to be able to go through that opening."

It was for that reason that the Chumash put their bodies there in 1978 and occupied the land for one year to halt the natural gas plant.

Broyles-Gonzalez described the friendship formed between the two women before she wrote the book. They met when Broyles-Gonzalez arrived in the region and asked permission of the Chumash to enter their territory.

Meanwhile, Khus raised five children, and worked at many jobs, including being a waitress. But her activism, which was really the work of a spiritual medicine person, prevented her from having a career.

During the 20 years that Broyles-Gonzalez lived in Chumash territory, she participated in the Chumash ceremonies, before returning home again to Tucson.

The spirit of Tucson, too, had once called Khus to come here.

"Tucson has a special spirit and it called her."

"For Native people, we've been talking for thousands of years."

Broyles-Gonzalez quoted Khus about the stories that we hold in our bellies, which have a life of their own.

"I am waiting for the stories to awaken," Khus said.

"We carry the stories in our belly."

"The stories have a life of their own."

Earth Wisdom: A California Chumash Woman can be ordered from the University of Arizona Press: http://www.uapress.arizona.edu/Books/bid2300.htm

The UNOCAL oil spill at Whale’s Cave near Avila Beach, California in August 1992 was a major disaster. It is an example of the kinds of struggles that Indigenous people have to wage to even try to protect their land.When we discovered the oil spill we knew we had to stay there and monitor the burials and other life forms. We organized and worked for several months there to prevent even worse things from happening. In the end, UNOCAL’s corroded pipe spilled over 6300 gallons of oil into the ground and into the ocean.
Read more: http://www.uapress.arizona.edu/extras/BroylesGonzalez/UnocalSpill.pdf


San Simeon Point and the Hearst Corporation
If you look at a map of the California central coast you’ll notice that there are many points that go out to the ocean. These points have certain significance to the spiritual world of the Chumash People. One of the points that protrudes out into the ocean out in my ancestral area—the northern 6 part of the Chumash nation—is a place now called San Simeon Point. Some of you may be familiar with the struggle that continues to go on around San Simeon Point. The very wealthy and powerful Hearst family and their Hearst Corporation controls that Point, as well as thousands and thousands of acres around there. The Hearst entity has wanted to develop on that sacred site.

Some years back they came forward with a plan to build a world-class golf course and high-end resort for wealthy people. There was a huge outcry against this resort golf course that the Hearst people wanted to put there. That outcry came not only from Indigenous people or from central coast people. People from throughout California, from throughout the United States, and even from other countries were outraged. The Hearst people pulled back, they regrouped, and then they brought in other players. One of the family members, Steve Hearst, became involved, and they also hired a local attorney instead of a shark type from Los Angeles. They brought in these folks thinking that local people would feel more comfortable.

The Hearst Corporation has been negotiating with the Nature Conservancy agency for quite a few years, concerning the placement of a Hearst project there. They want to develop there. All of a sudden several things happened very quickly just before the end of last year. One of them is that the Hearst Corporation dropped the Nature Conservancy; the lead Nature Conservancy person then jumped over to a new environmental agency called the American Land Conservancy. A whole new plan was then put forward. The Hearst family and this new "Land Conservancy" came to one of the organizations in the San Luis Obispo area who had been struggling against the development of San Simeon Point. It was just one of the many organizations in San Luis Obispo who were opposed to the development. The Hearst Corporation told them, "We have this new plan. It’s a great plan and you need to give us complete support for it immediately because we need to get paperwork to the State in order to be eligible for State money to buy an easement from the Hearst Corporation...
Read more: http://www.uapress.arizona.edu/extras/BroylesGonzalez/UnocalSpill.pdf
at February 03, 2012 No comments: