By Brenda Norrell
Censored News
http://www.bsnorrell.blogspot.com
Louise Benally, Dine' from Big Mountain, resisting relocation on Black Mesa, describes the destruction caused from Peabody Coal's coal mining on Black Mesa and the Navajo Generating Station in nearby Page, Ariz., on the Navajo Nation. It is now poisoning Navajoland, the Grand Canyon region and the Southwest.
On the video, Louise responds after Navajo Attorney General Harrison Tsosie spoke to a House committee in Washington this week, attempting to halt US EPA regulations. Tsosie said the standards, which would lower mercury emissions, were "too harsh."
Benally responded and said the Navajo Attorney General went to Washington to “beg” to keep the Navajo Generating Station open.
Benally describes the pollution to the land, water, air and people. “He doesn’t seem to see all the bad problems people are living with each day.”
She said Navajos on Black Mesa are without water and have to haul water. In some cases, Navajos on Black Mesa have to drive 80 miles a day to haul water in barrels.
She describes the air pollution, depletion of the aquifer, and the water scheme underway by Arizona Senator Jon Kyl for more theft of Navajo water.
As for Navajo Attorney General Harrison Tsosie, Benally said he is not looking at the arsenic and mercury released into the air and how this impacts climate change.
“There are plants dying. There is no rain, no snow, it makes things worse than usual. The drought is very intense and it is going to get worse as time goes on.”
Benally described the harm being done by the current Navajo elected leaders.
“These so called leaders of the Navajo Nation are totally uneducated and they just totally don’t care about the environment, all in the name of profit. And that is a danger.
“I think we need to dismiss these leaders and replace them with leaders who do care about nature and the survival of the people," Benally told Censored News.
The Navajo Generating Station, one of three corporate owned coal fired power plants on the Navajo Nation, is one of the top producers of greenhouse gases in the US.
While the electricity goes to distant Southwest cities, many Navajos live without running water and electricity, suffering from respiratory problems and other illnesses.
Interview recorded by Brenda Norrell/Censored News, Friday, Feb. 10, 2012

In the Vortex: Calexico and Charles Bowden in 'Flor de Muertos' 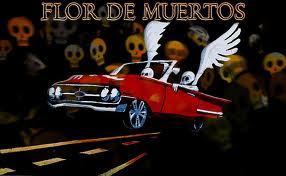 By Brenda Norrell
Censored News
http://www.bsnorrell.blogspot.com
TUCSON -- Flor de Muertos screened tonight, a hot new music video of Calexico, mixed with the sights, sounds and taste of living and dying in the borderzone.

So, who will love this hot new film?

In my scribbled notes tonight, I wrote, “Finally a rock video about the border.” Then, I spent the rest of the night trying to figure out what Calexico music is. Is it Tex Mex? Definitely not. Whatever, it infuses the spirit of Tucson/Nogales/Sonora, that linear and circular path of fast music and fast cars, mixed with the food and culture of this land, where the desert meets the sea.

Most of the film is a music video of Calexico, and the rest is sure to lead to heated discussions, especially for those who want to get really mad at Charles Bowden.

At the screening at the Center for Creative Photography at the University of Arizona tonight, the first question from the audience focused on, well, who else.

Bowden, who made his home in Tucson for years, makes powerful, and controversial, observations in the film, like this one: There are no drug cartels in Mexico.

“There are no cartels. That is a lie of the US government.”

Bowden, longtime news reporter and book author, points out there is a drug industry, an industry that is now leaving the border strewn with dead bodies. Bowden goes on to say that the drug industry is a mainstay of the Mexican economy, producing $30 to $50 billion each year.

Bowden, author of two dozen books, also ventures off to reveal something of himself. He says he has no interest in crime or drugs, and would rather be writing about plants and animals. Further, he says he never got up a morning in his life and thought he would “go look” for a story. He makes it clear that the stories beckon everywhere in life, and that a person would have to be morally dead to have the need to look for a story.

Which brings us to the point of the film about the ceremonies and pageantry that surround living and dying on the US Mexico border.

The film, with short pieces of documentary combined with Calexico in concert, reveals the truth of the border. In the neighborhoods of Nogales and elsewhere, the drug kingpins are known, but the people are now too afraid of being killed to speak out and bring an end to the nightmare.

The lyrics of one song in this film reveal more of the truth: The drug kingpins give law enforcement the choice of violence or payoffs. Bowden points out that people are not even going to claim bodies anymore. Then, there is migration, and immigration.

But as one filmgoer pointed out tonight, the real story of immigration is not just about people from the south coming to the US in search of jobs. For instance, from Oaxaca, in southern Mexico where the filmgoer once lived, people have come to the US for generations to work, then returned home again. And they returned through the years back to the US to visit their families here. Well, until now, because the laws have halted this natural flow of life for migrant workers, of migration and visiting families.

Producer Dougles Biggers wasn't troubled by the backlash tonight, in fact he seemed to expect it. Biggers said Bowden probably wouldn't want filmgoers to agree with everything he said.

In Flor de Muertos, from the sounds of the young and old musicians “playing the border,” as a musical instrument, to the images of lightening, low riders and saguaros, there is the flavor of the border, the visual taste of this land that has become both an epic center and vortex.

Artist Salvador Duran describes the greater truth found in death, the spiritual truth that is alive and raw in this reality.

Still, there is another reality, the long lines of Border Patrol cars, and the border wall, that signify these times.

With dramatic footage from the All Souls Procession of thousands, to the tender remembrance of one four-year-old’s last days of dress up for the photos for the event, the film offers a window into the life and hope that comes from living and dying in the borderzone.