"This is an infringement upon human rights."

APTN: Arrests made at sacred fire in New Brunswick

Twelve people were arrested Friday morning by the RCMP at the site of a sacred fire as part of an on-going protest in New Brunswick over seismic testing in the area.

As a group in Norway planned an Indigenous World Conference for 2014, the Indigenous Environmental Network made an intervention. Will the gathering in 2014 uphold the Rights of Nature? The outcome remains to be seen. -- Censored News 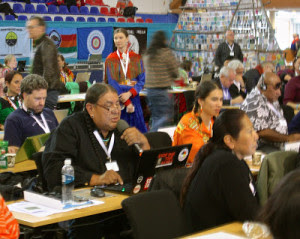 "This green economy regime places a monetary price on Nature and creates new derivative markets that will only increase inequality and expedite the destruction of Nature – of Mother Earth." -- Tom Goldtooth, IEN


11 June 2013
by Indigenous Environmental Network
http://www.ienearth.org/intervention-by-indigenous-environmental-network-tom-goldtooth/http://www.ienearth.org/intervention-by-indigenous-environmental-network-tom-goldtooth/
Intervention by Tom Goldtooth, on behalf of the Indigenous Environmental Network, delegate from the North America Caucus.
Mr. Chair, Bureau, Indigenous Peoples Delegates and Indigenous Peoples of the World;
This intervention is not on behalf of the North American Caucus, but on behalf of the Indigenous Environmental Network.
It is very important that the outcome document articulate the expression of Indigenous worldview that we all share, as Peoples of the Land, Waters, Oceans and noting our relatives of the Polar region – I will add the “Peoples’ of the Ice and Snow”.  The full recognition of our spirituality and cosmovision, as part of our culture, has consistently been under attack by States and their colonial bodies and within the implementation of their economic globalization and so-called sustainable development agenda. As Indigenous Peoples we are observing the UN, the World Bank, and other financial and private sectors, including energy and extractive industries that are pushing a “green” economy agenda. As Indigenous Peoples, we must articulate our voices in the Outcome Document on this UN and member States’ economic development agenda that is expanding the commodification, financialization and privatization of the functions of Nature. These functions of Nature are the life-giving cycles of Mother Earth.
This green economy regime places a monetary price on Nature and creates new derivative markets that will only increase inequality and expedite the destruction of Nature – of Mother Earth. We cannot put the future of Nature and humanity in the hands of financial speculative mechanisms like carbon trading, REDD, conservation and biodiversity offsets and payment for environmental and ecological services.
As Indigenous Peoples, we are the Guardians of Mother Earth and Father Sky.  We are the Peoples of Mother Earth. The rights of Indigenous Peoples and the rights of Mother Earth are not separate. We only have one Mother Earth – let’s take care of her and lift up her right for her natural laws to be recognized.
Thank you. 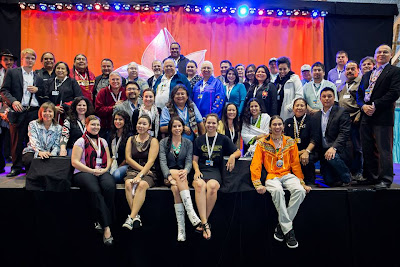