Greenwashing Snakes are crawling into Paris 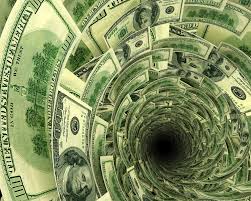 The snakes are crawling into Paris, ready to make bucks on 'Greenwashing.'
These schemes often are disguised as philanthropies. One of the investors is Bill Gates, already exposed for his investments in GEO private prisons, the human rights abuser targeting migrants and people of color. Gates says he pulled out his other investment in G4S, the global security and prison human rights abuser, whose buses snake along the Arizona border.
One of the slick abuser strategies was exposed earlier in the Clinton Foundation. Bill Clinton went into countries, claiming to be carrying out human rights efforts, with his Canadian mining buddy and they came away with massive mining deals, including uranium mines in Khazakistan. A leaker exposed the millions that then flowed to the Clintons.
Another slick operation ready to invest in greenwashing in Paris is the Children's Investment Fund, a hedge fund in the UK.
Watch for the snakes to crawl out in Paris.
President Obama is ready to do a deal for 'clean energy research' with Gates, the hedge fund investor and others in Paris. It is called Mission Innovation.
The private sector in Mission Innovation is called Breakthrough Energy Coalition and no doubt they smell green money. Facebook's Zuckerberg is part of it. It is no surprise to see Hewlett Packard Enterprise's CEO in there.
Keep an eye on it.
You know the pattern: The people get peanuts and the rich get richer.

"Sponsored by the likes of dirty energy giant Engie (formerly GDF Suez, also an official sponsor of COP21) alongside fracking enthusiast Suez Environment and agrofuels giant Avril-Sofiproteol, the event at the Grand Palais will also welcome Vinci, the company behind the proposed airport at Notre-Dame-des-Landes, coal financiers HSBC and BNP Paribas, and Coca-Cola, among many others."

Please post & distribute.
MNN.  29 Nov. 2015. In june 2007 there was a rumored arrest warrant for the great “untouchable” sage, Red-X” for alleged inciting “sageosity and infamocity”! It’s one of those open “John Doe” warrants for the “some-crime-has-to-fit-every-onkwe’hon:weh” mentality that pervades the colonial enterprise.

“Do what your mind tells you has to be done!”
Phil Fontaine of the AFN, the RCMP, OPP and SQ had set a vicious “trap” for those of us who challenged Canada Inc.’s lack of jurisdiction over us and our land.  It was  to be sprung on “Aboriginal Day”. They have never taken their sights off us or stopped scoping us with their high tech weapons.
The charges against the Red-X are some sort of treason. He was certainly giving out the most sageous messages ever heard in the universe, straight from the Fifth Dimension.
The “infamocity” was obvious.  It came from his pretentious demarginalization.  He was accused of inciting the overturn of the existing worldwide social disorder.  He would have to be tried in an inter-galactic court of Ur’anus!  No neutral turd party was found to squat in judgment!

Bloodline: “To take over the world, we must learn to speak Mohawk & Turkish”.

He was charged because he always says what is contrary to the principles upon which Canada, the U.S. and other colonial states are founded, such as self-centered self-service, cronyism, taking advantage of people, stealing Indigenous possessions, conning people into selling to them at bargain basement prices and pocketing all the profits.  Red-X advocated the overthrow of this system that is dedicated to monotheism, oppression and suppression of people.  He was charged with inciting people to think clearly, think ahead and protect the environment.  This is a grave crime in the eyes of the colonial corporations that are trying to run the galaxy and colonize the universe.
Red-X strikes unspeakable terror into the minds of  colonizers!   Red-X asks, “What are they afraid of?”
Despite being such crooks, they had time to put out a “Most Wanted” poster of the Red-X.  They had a photo, but all you could see was the hood.  Through the eye slits, one can see a black and cavernous void, leading directly to the Fifth Dimension.

Some scientists discovered that some of the oldest vibrations in the universe are coming from a black hole in Pisces.  They say there were once meat-eating chickens bigger than the Taranosaurus Rex roaming around in Siberia.  As Einstein pointed out, “The solution can be found when you take the mass of the photons and divide it by the square root of infinity”.
The black beaded hood covers a scar.  Was he one of those kids who were beheaded and buried in the basement of a residential school?  If so, it seems someone from the Fifth Dimension sewed his head back on?  The Red-X would not want people to get scared by the scar on his throat, especially little children who have no need to know about the time he spent in wherever he was.
The special hood can never be found in Wal-Mart or the Dollar Store.  “This is the power of the hood”, said the Red-X.  “You gotta know your neighbors.  You gotta speak to ‘em.  You gotta ask ‘em what they think.  And then you gotta stand beside ‘em.”
Another mystery is where does he live?  The Red-X will only say, “I am he who has been prophesized to come.  I am the one they’re looking for”.  “Fine me if you will”.

“Chief, sign over here in front of the casket”.
The Red-X is not a sequel to the “X-Files”.   He’s been around a lot longer than that.  A leading Canadian historian dusted off some primary documents in the archives.  Accordingly, he found many of the original treaties made by the colonizers to let them live here were signed with “Xs”.  But we would not put much stock in that.  According to the Red-X, “They’re all forgeries”.
But someone had to know about him to forge his signature.  We are specially skeptical about the ten “Xs” that all look exactly alike that are on many of the first treaties.
The Red-X was concerned about why Phil Fontaine [of government-front “Assembly of First Nations”] accepted Indian Affairs Minister Jonestown Prentice’s offer to settle their claims to our land.  Red-X says, “Think about it.  Jonestown might have spiked Phil’s martini with a date rape drug instead of an olive”.

After chugging it down, Phil excused himself for a moment, zig-zagged by mistake into the ladies room to adjust his hair.  There were mirrors everywhere.  He saw all these guys that looked just like him.  “Mirror, mirror on the wall, who is the fairest one of all?  Does Jonestown have a good deal for me?” he asked himself and nodded his head up and down.  All the other guys in the mirrors nodded together in unison.  Then he went back out to report to Jonestown, “Looks like we got consensus, boss”, he said.
Because of Red-Xs pearls of wisdom, Ottawa decided to gather the swines into an “Interdepartmental Red-X Committee” run out of the war room in the Indian Affairs ”Tower of Terror” on Wellington Street.  According to their mission statement, they are commissioned to “figure out just what is the Red-X saying”.  It’s headed by a top encryption expert from Arlington Virginia who said, “This is the biggest challenge of my entire life”.
As Red-X says, “Stay tuned”. As Hinder sings: “If I could go back in time, I wouldn’t change a damn thing in my life, cause I love the dumb things we do when we’re young. But the best is yet to come.”  Video: Hinder “Best is yet to come”.
MNN Mohawk Nation News kahentinetha2@yahoo.com or more news, to donate and sign up for MNN newsletters, go to www.mohawknationnews.com More stories at MNN Archives. Address: Box 991, Kahnawake [Quebec, Canada] J0L 1B0thahoketoteh@hotmail.com for original Mohawk music visithttps://soundcloud.com/thahoketoteh
Fontaine’s lynching party.
Saboteur Fontaine sets up policing agreement.
Russia-China bankdeal.
Another dead astronaut.
Erdogan: Turks owe Syria for stolen oil.
VT: Putin, don’t worry aliens have your back. 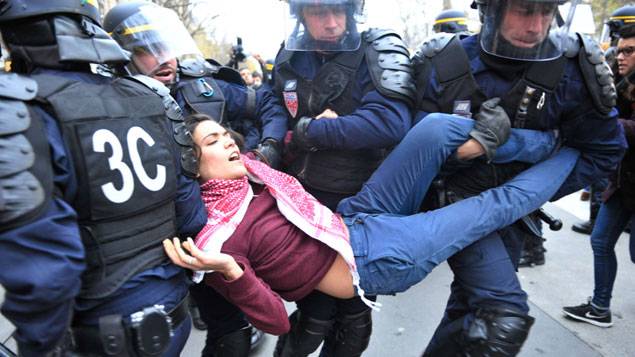 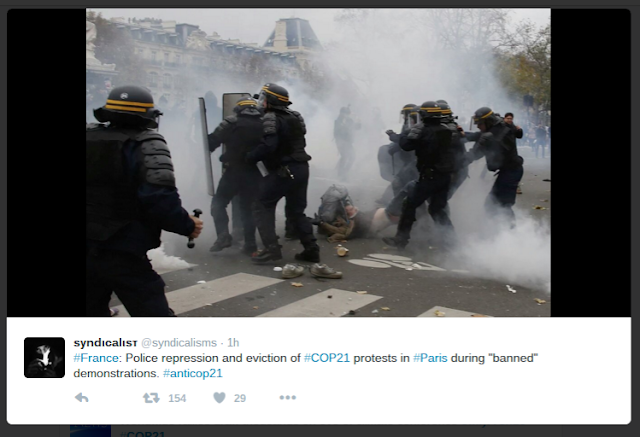 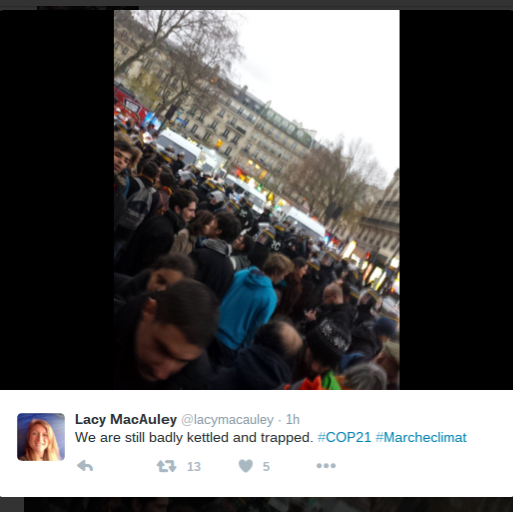 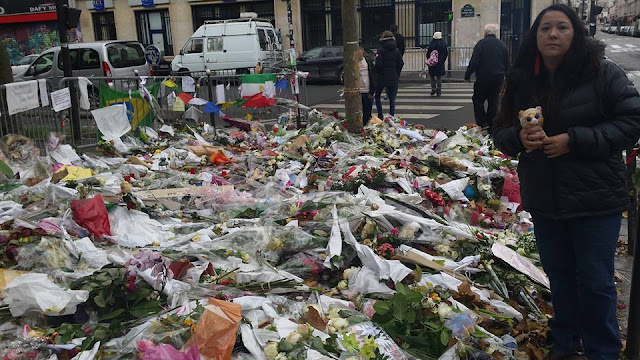 Kandi Mossett in Paris today at a site of the recent violence. Prayers were said by members
of the Indigenous Environmental Network.

(Please wait for video to load below.)

Kandi Mossett, Mandan, Hidatsa and Arikara, from North Dakota speaks out against fracking and for the children and future generations, in Paris as the climate summit readies to begin.

Check out our first video update from Paris, COP21!! With spokespeople from Cooperation Jackson and Indigenous...


Kandi Mossett (Mandan, Hidatsa, Arikara), Native Energy & Climate Campaign Organizer – Kandi was born in North Dakota and grew up in an area known today as the Fort Berthold Reservation. She obtained her undergraduate degree from the University of North Dakota (UND) in Natural Resource and Park Management. After working in the Park Service for 3 years she went on to earn a Masters of Environmental Management Degree within UND’s Earth Systems Science and Policy Program. She began working for the Indigenous Environmental Network as the Tribal Campus Climate Challenge (TCCC) Organizer in February of 2007. Her work has expanded over the years to include work in the international arena in order to create more awareness about international decision-making and its effect at the local level. Her current major focus is on creating awareness about the true dangers of hydraulic fracturing while working to push for regulations and protections, particularly on Native lands.
at November 29, 2015 No comments: 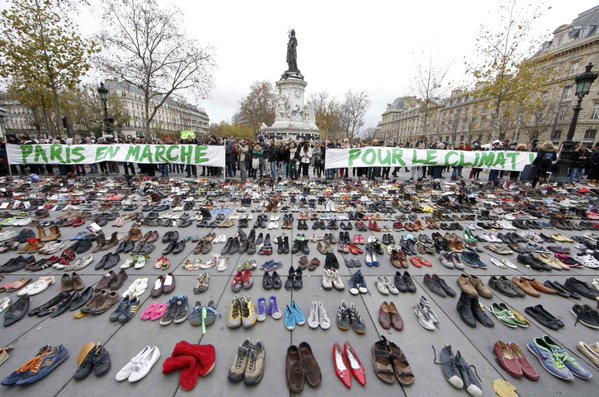 Watch video, read more in The Guardian
Over 10,000 pairs of shoes on the Place de la Republique replace marchers who were set to take part in a climate cancelled protest as activists take to the streets around the globe. The Paris march was expected to bring 200,000 people onto the city’s streets but was forbidden by French authorities in light of security concerns. Elsewhere, thousands marched in Hong Kong, Seoul and Sydney ahead of the Paris climate summit on Monday
http://www.theguardian.com/environment/video/2015/nov/29/paris-climate-protesters-banned-but-10000-shoes-remain-video?CMP 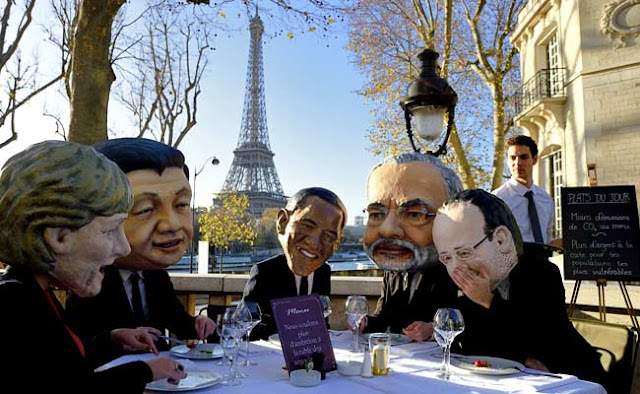 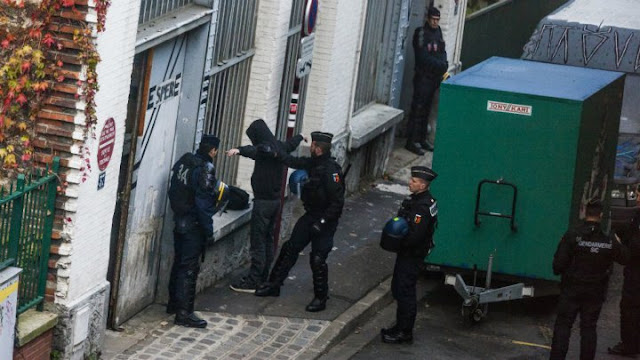 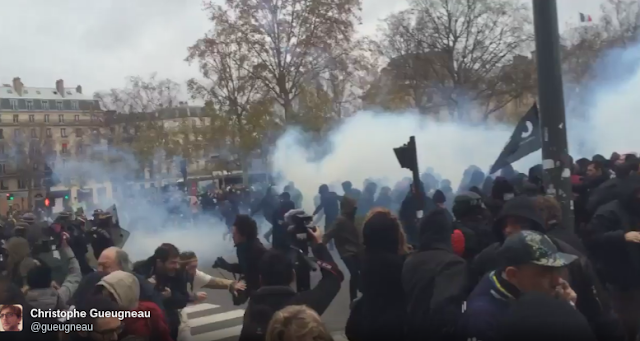