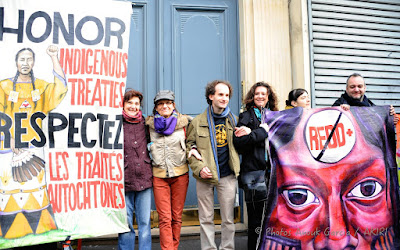 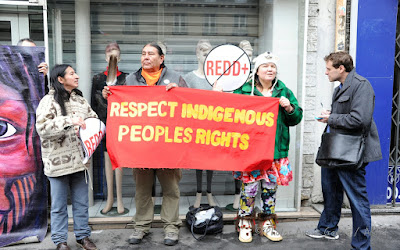 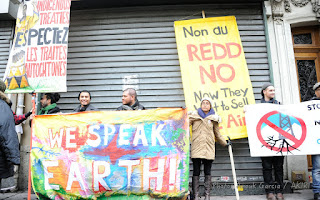 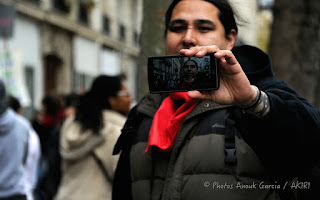 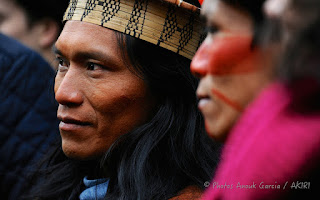 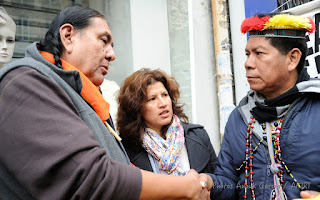 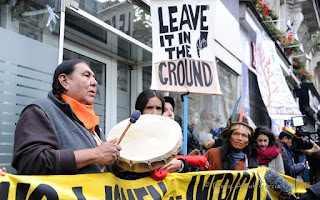 Thanks to our friend Christine Prat in France for sharing these photos from Paris, of the Committee in Solidarity with American Indians in France, shown with the Indigenous Environmental Network and other Indigenous and frontline activists.

The first is of people from CSIA, from left to right: Catherine Jekayumar, Edith Patrouilleau (vice-chairwoman), Pascal Gregis (who works for a radio), Sophie Gergaud (who organizes a Native American Film Festival) and Céline Planchou, member of the Committee, translator for the English speaking Native American visitors, and Chairman Sylvain Duez-Alessandrini.
at November 30, 2015 1 comment:

Indigenous Peoples: UN Paris Accord could end up being a Crime against Humanity and Mother Earth 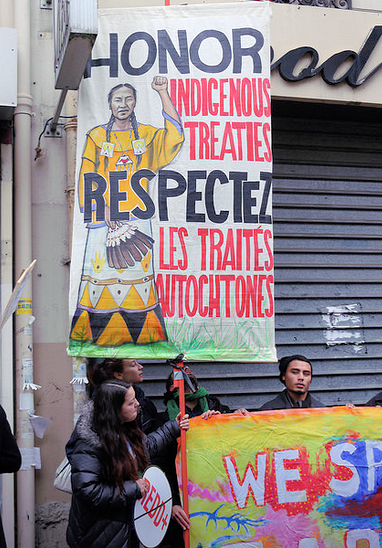 DEMOCRACY NOW! "If You're Not at the Table, You're on the Menu": Indigenous Activists Demand Role in Paris Climate Talks 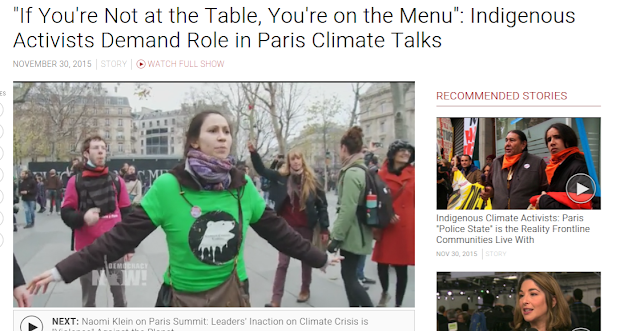 Watch coverage:
"If You're Not at the Table, You're on the Menu": Indigenous Activists Demand Role in Paris Climate Talks. This quote comes from Kandi Mossett, Hidatsa, Mandan and Arikara from North Dakota.
http://www.democracynow.org/2015/11/30/if_youre_not_at_the_table
Interview with Tom Goldtooth and Dallas Goldtooth:
http://www.democracynow.org/2015/11/30/indigenous_climate_activists_paris_police_state
at November 30, 2015 No comments:

Indigenous and women's delegations arrive in Paris for COP21, with solutions, prepared for their Rights of Nature Tribunal
By Brenda Norrell
Censored News
updated Nov. 30, 2015
Native Americans from the United States have joined Indigenous Peoples from around the world with their prayers, and message of peace, at COP21, the United Nations Climate Summit, in Paris.
They have brought another message: “Leave it in the ground.” Native Americans have had enough of being the victims of dirty coal-fired power plants, oil and gas drilling, fracking and mineral mining.

Kandi Mossett, Mandan, Hidatsa and Arikara from North Dakota, was among the first Native Americans in the Indigenous Environmental Network delegation to arrive.

Mossett, shown above in photo, said, "On November 29th the Indigenous Environmental Network organized a healing ceremony in front of the Bataclan theater just before thousands gathered to participate in a human chain action in the streets of Paris.

"It was a beautiful ceremony featuring Indigenous youth speakers from North America, the Arctic, and the Pacific Islands. Our delegations always see it as a necessity to have prayer before any large action. We offered kind words, song, and calls for climate justice and peace."

While the words climate change, may be vague for many, for Native Americans who have been the victims of the United States policy of a slow and toxic genocide, climate change means dirty coal-fired power plants, oil and gas drilling, fracking, toxic dumping, uranium mining, deforestation, poison rivers and exploitation.
On the Navajo Nation, Dine’ live with the strewn radioactive rocks from Cold War uranium mines, which their children play on. They breathe the dirty coal of Peabody’s Coal on Black Mesa, where Dine’ continue to resist relocation. They breathe the gases from the coal-fired Navajo Generating Station, which lights up Phoenix and Tucson, and pollution from two other coal-fired power plants, while many Dine' live without running water and electricity. Now, Dine’ live with the US EPA’s toxic gold mine release poisoning the San Juan River. It means traditional farmers watch their crops die.

In the nearby Pueblos, there is the same legacy of death from uranium mining, which has left its scars on the land and the people.
In North Dakota, the lands have been devastated by oil and gas drilling and fracking. Mossett is in Paris at COP21 to tell the story of her people. She is there for the children and future generations.
"This is COP21, how many more are you going to have?” asks Mossett, referring to the failure of the world’s leaders to make any substantial difference in the poisoning of the planet. She is among the frontline grassroots activists in the delegation from the Indigenous Environmental Network.
In South Dakota, Lakotas fight uranium mining and the poisoning of their scarce water. Throughout Indian country, Native Americans battle new schemes to steal their water, with backdoor political schemes known as “Indian water rights settlements.” Further, they battle the machinations of Arizona Sen. John McCain, who recently sneaked a land exchange into the defense bill which would turn sacred Apache land into a massive copper mine.
Now, women have risen to the forefront in climate justice.
In Paris, the Women’s Earth and Climate Action Network (WECAN International) is hosting a dynamic panel of Indigenous women speaking on climate change solutions in Paris on Sept. 7.
The International Rights of Nature Tribunal will meet in Paris December 4 --5. Hosted by the Global Alliance for the Right of Nature, the Tribunal is a citizen-created initiative that gives people from all around the world the opportunity to testify publicly on destruction of the Earth and their communities.
Back home, Indigenous People face violence in their homelands, as oil and gas and other temporary mine workers destabilize Native communities with drugs, sex crimes and violence. Meanwhile, globally -- from Guatemala and Peru to Brazil and throughout the Amazon -- mining companies continue to carry out assassinations, rapes and disappearances of Indigenous Peoples who oppose mining. These mining companies are primarily owned by Canadian and US corporations.
While global leaders with their bank accounts and posturing in Paris make the headlines, Indigenous Peoples are in Paris to tell the truth of the people. 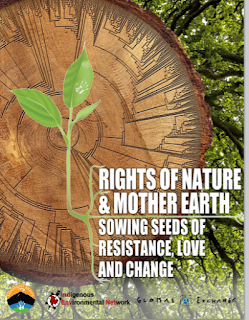 
‘Women Leading Solutions on the Frontlines of Climate Change – Paris’