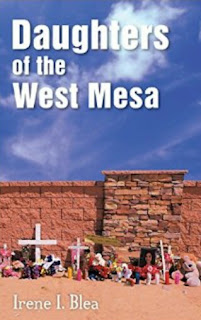 Dr Irene Blea is one person who hasn't forgotten about the unsolved killings of 11 women and girls found murdered on Albuquerque's West Mesa in February 2009.  The author of a new novel based on the slayings, "Daughters of the West Mesa," Blea spoke about her book and the West Mesa case at a March 8 (International Women's Day) webinar sponsored by the Southwest Organizing Project (SWOP).

A sociologist by training, Blea was drawn to the case back in 2009 when she ran across news of the murders one evening on television and "saw a woman with a look I had never seen before."

The revelations of mass murder with signs of gender violence sent Blea on a long journey as a participant observer. Along the way she met or talked with victims' relatives and friends, women bikers and Albuquerque Police Department (APD) detectives assigned to the murder investigation, including Ida Lopez, the now-retired APD officer who was tasked with probing the case for many years. Diving into the lives and deaths of the West Mesa women, Blea participated in prayer vigils, Aztec ceremonies and funerals.