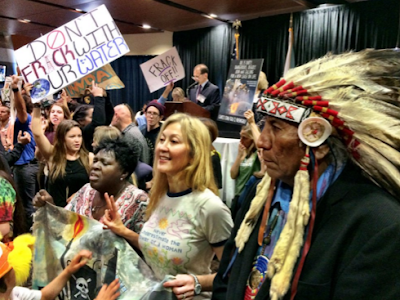 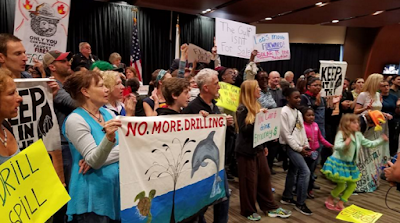 Wednesday, March 23, 2016
.
From Rising Tide:
Currently, hundreds of climate and social justice activists are occupying the Superdome in New Orleans in a mass protest calling to keep 43 million acres of oil and gas leases in the Gulf of Mexico.
Today, the Obama administration is auctioning off those 43 million acres to the oil and gas industry. Courageous activists have taken a stand to say a resounding “NO” to further oil extraction by the same people that brought us the BP Oil Disaster in 2010 and continue to decimate communities and ecosystems along the Gulf Coast. Our friends aren’t demanding “kinder and gentler” version of drilling,   but a stop to new offshore leases and no more drilling.. They’re setting an example for how movements against climate change and social justice can take bigger, bolder action.
In 2005, the Superdome became a symbol of climate injustice during Hurricane Katrina. Now despite recent news about the Obama Administration ending offshore drilling in the Arctic and the Atlantic seaboard, the industry is cynically being allowed to widen its profit margins by continuing business as usual in the Gulf from the very location of so much pain and misery.
We remain on the edge of catastrophe. Crushed between the pincers of climate chaos and economic, social and political inequality, our global society is hurtling toward a breaking point.
It’s up to us to bend the arc of history toward survival. Now is our chance.

The Petition
http://www.thepetitionsite.com/573/424/821/?platform=hootsuite
After promising to "change the way we manage our oil and coal resources so that they better reflect the costs they impose on taxpayers and our planet” in the State of the Union, President Obama put new federal coal leases on hold. Will our President show the same climate leadership in the Gulf?
On March 23rd, the Department of the Interior will auction drilling leases to 43 million acres of federal waters in the Gulf of Mexico. Below the Gulf sits our planet’s 8th-largest source of potential carbon pollution. Should this auction proceed, we will remain on course for catastrophic climate impacts, endangering efforts to restore our priceless wetlands.
While the BP Disaster is the worst offshore accident in U.S. history, it is just one of thousands that have occurred since offshore drilling began in the 1930s. Spills, explosions, and worker injuries plague the industry, even as they move into deeper and more dangerous waters.
The industry is responsible for tragic wetland losses too, which threaten coastal communities across the Gulf. Louisiana alone loses over an acre of its storm-buffering wetlands every hour. This is an alarming rate, especially in a world of warming oceans and stronger storms.
at March 23, 2016 No comments: