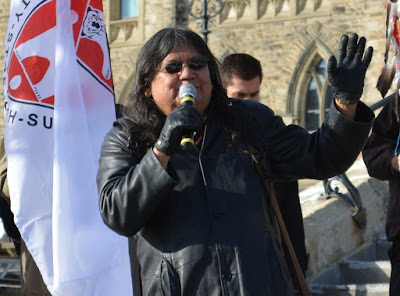 Official Statement from the Family of Arthur Manuel on His Passing
On Wednesday January 11, 2017 at 11:00 PM, Arthur Manuel, our beloved father, grandfather, husband, brother, uncle, warrior, and teacher passed away. Arthur was one of our most determined and outspoken Secwepemc leaders and activists—a pillar in the resistance, known globally for his tireless advocacy for Indigenous Peoples’ right to self-determination. He passed on into the spirit world surrounded by many generations of his loving family.
Arthur was the son of Marceline Paul of the Ktuanaxa Nation and George Manuel of the Secwepemc Nation. George was a political leader and visionary who served as president of the National Indian Brotherhood and the World Council of Indigenous Peoples.
Arthur was born into the struggle and groomed to be a leader and defender of Indigenous rights and title. Coming up as a young leader in the 1970s, he served as president of the National Native Youth Association, leading the occupation of Indian Affairs. He attended Concordia University (Montreal, Quebec) and Osgoode Hall Law School (Toronto, Ontario).
He returned to his community and was elected Chief of Neskonlith Indian Band, Chair of the Shuswap Nation Tribal Council, and Chair of the Assembly of First Nations Delgamuukw Implementation Strategic Committee. He was a long-time co-chair of the North American Indigenous Peoples Caucus of the UN Permanent Forum on Indigenous Issues and former co-chair of the Global caucus. He was active in the Defenders of the Land and Idle No More movement and as a board member of the Seventh Generation Fund for Indigenous Peoples. He was one of the main strategic thinkers of the decolonization movement in Canada. As the spokesman for the Indigenous Network on Economies and Trade, he convinced the World Trade Organization to recognize that Indigenous peoples are subsidizing the BC lumber industry through the non-recognition of Aboriginal title. He was co-author, along with Grand Chief Ronald Derrickson, of the award-winning Unsettling Canada: A National Wake-Up Call, with a foreword by his friend and fellow activist Naomi Klein.
He worked selflessly in defence of Indigenous territorial authority and he fiercely opposed any termination of Indigenous land rights. He rejected provincial and federal authority over unceded Indigenous land, and challenged the extinguishment of Indigenous title through the BC treaty process. He fought climate change, battling the imminent threat of pipelines across Secwepemc territory.
He was a world traveller who connected Indigenous nations across the globe to unite in a common vision and defend their rights. He was gifted a button blanket by the Nuxalk nation and has received countless honours for his work around the world.
Arthur was also a teacher and a mentor to many. He was a source of knowledge for youth and young leaders. Through his fierce love for his people, he shone a light on the path to justice for a new generation of activists.
He’s a residential school survivor, having attended the Kamloops (Kamloops BC), St Eugene’s (Cranbrook BC) and St. Mary’s (Mission BC) residential schools.
Arthur is survived by his life partner, Nicole Schabus, by his sisters Emaline, Martha, Doreen, and Ida, his brothers George, Richard, and Ara, and by his children, Kanahus, Mayuk, Ska7cis and Snutetkwe. He is predeceased by his parents, sister Vera, brother Bobby, beloved son Neskie and his grandchildren Napika Amak and Megenetkwe.
In his most recent article on Canada’s 150th celebration, published only a week before his death, Arthur insisted again that Canada was built entirely on the theft of Indigenous lands.
"Our Indian reserves are only .02% of Canada's land and yet Indigenous peoples are expected to survive on them. This has led to the systematic impoverishment of Indigenous people and the crippling oppression that indigenous peoples suffer under the current colonial system.
The .02 land based is used to keep us too poor and too weak to fight back. It is used to bribe and co-opt the Indigenous leadership into becoming neocolonial partners to treat the symptom of poverty on Indian reserves without addressing the root cause of the problem, which is the dispossession of all of the Indigenous territory by Canada and the provinces." – First Nations Strategic Bulletin, August-December 2016 Issue
____________________________________
Wake: Friday, January 13th 5:00 PM and Saturday, January 14th, Adams Lake Indian Band Gymnasium, 6349 Chief Jules Drive, Chase, BC
Funeral Services: Sunday, January 15th 10:00 AM, Adams Lake Indian Band Gymnasium
_______________________________________
Media contact: Russell Diabo at 613-296-0110 or rdiabo@rogers.com
Donations to support Arthur’s service can be sent to jacksoncrick7@yahoo.ca
Condolences to the family and photos of Arthur can be sent to erfeltes@gmail.com