Tori Cress 'Don't You Mean, Why I Still Have to March' 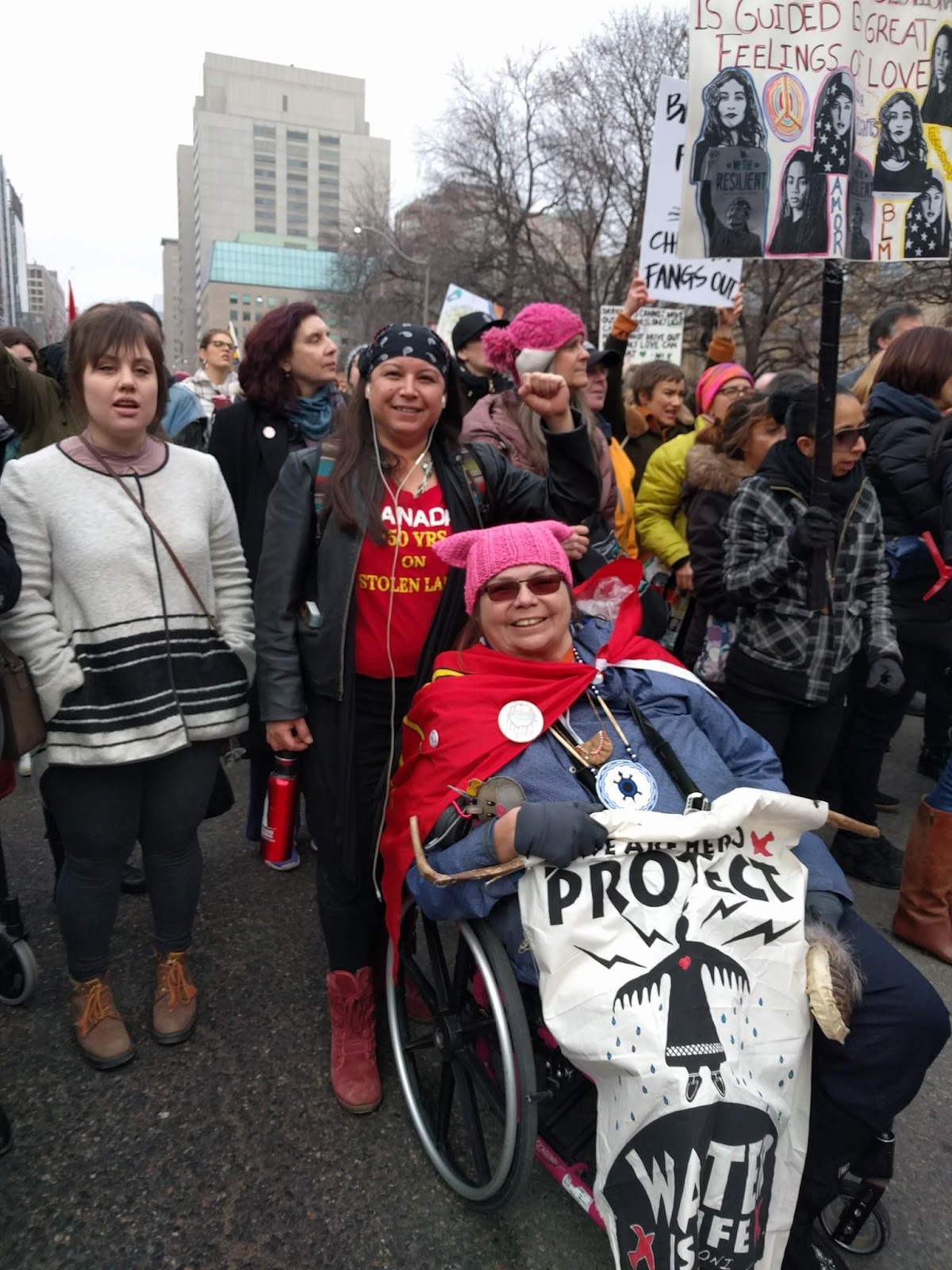 Don’t You Mean, Why I Still Have to March


Last Saturday during my participation in the Women’s March on Washington: Toronto I was asked many times “Why do you march?” My answer was the same every time, “First Nations women in so-called Canada do not have the same representation, rights, liberties and freedoms that Canadian women are entitled to, in abundance.”
I went there to tell my fellow marchers about the racist and patriarchal Indian Act policies forced upon Indigenous communities; policies that are currently used to govern the First Peoples of Canada. I was there to share my story of injustice and inequality with everyone. I was there to share this information on fliers I wrote up and printed, which tell of my experience with corrupt politics that will possibly dispossess me from the traditional territory of my ancestors. I went to let others know that I can potentially become a refugee from my own territory thanks to these archaic Canadian laws, which were not ever meant to help the Indigenous Peoples on this land we now share. These things are happening now, in real time, across the country.


The first thing that struck me as I walked towards the front of Queen’s Park was the very small numbers of Toronto police officers compared to their heavy presence I am accustomed to seeing at any of the rallies that POC have organized in the city of Toronto. The second thing that struck me was the enormity of the the crowd that had gathered together. It instantly overwhelmed me and, I won’t lie, the tears of sisterhood welled up in my eyes and for several moments I needed to stop and breathe just so I could regain my bearings. I wasn’t sure how I was going to find my Indigenous sisters and brothers in that massive crowd but I headed to where the march was beginning, knowing that was where I should find the Indigenous block and would soon be hearing their drums. 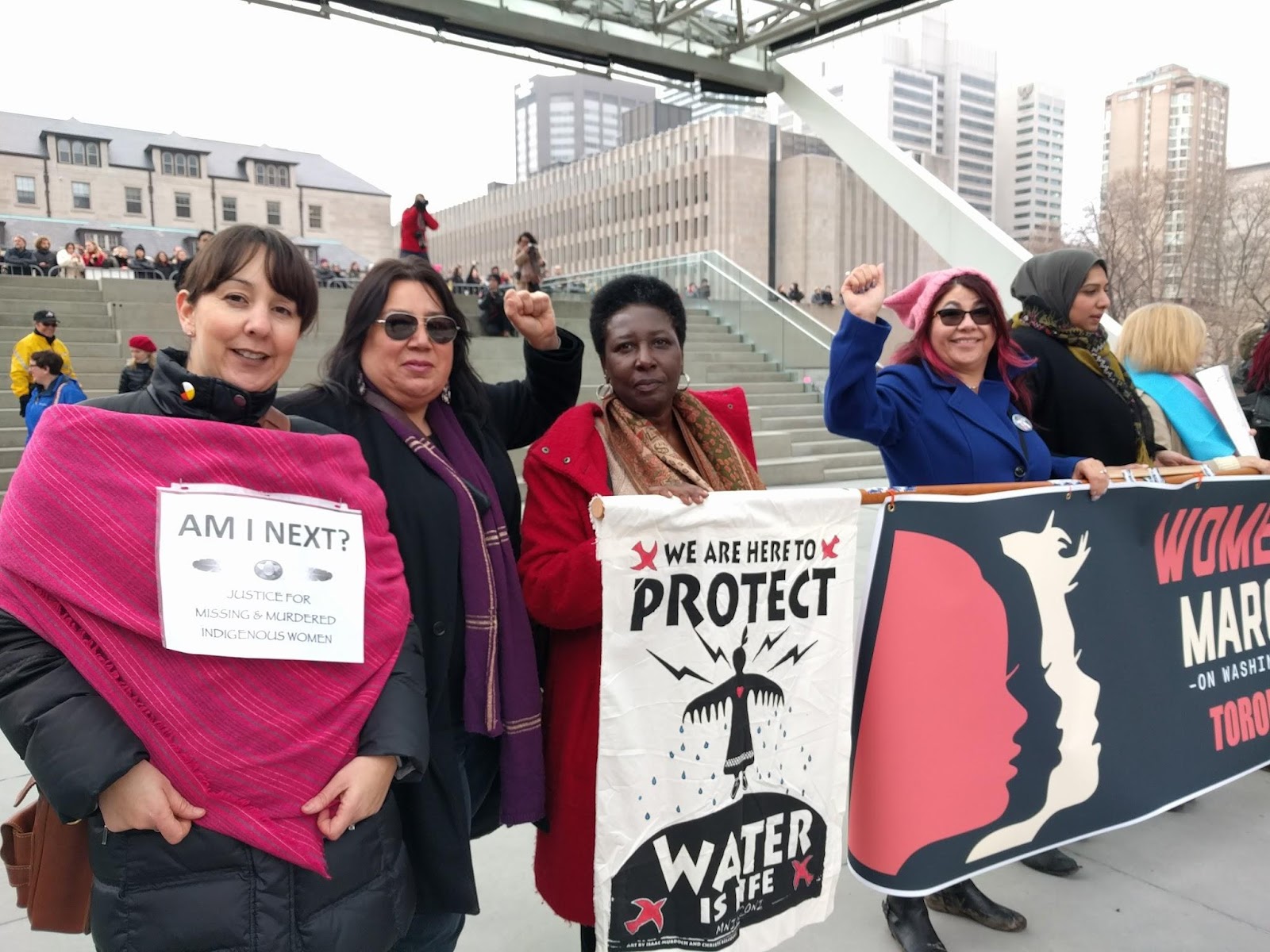 Along the way I was stopped several times for some pics of my t-shirt and Thunderbird woman banner selection for the Women’s March by non-POC settlers. This picture taking soon started to make me feel as though they only wanted to show on social media exactly how “diverse” the crowd was that Saturday, instead of engaging with me in a meaningful way. By the time I had weaved through the crowd to the front of the march, I still hadn’t found any of the folks that I usually rally with around Indigenous rights issues and environmental issues. I began to feel isolated amongst all those women. The initial joy I had felt was quickly dissipating until I met up with other Anishinaabe Nation members, Peter and Ann, which really helped me stay focused on the reasons I was there in the first place. I never did find the Indigenous block at the front of the march as I had expected. We ended up being but a handful of Indigenous women leading the march and we had to really hold our ground to maintain that physical position. I stayed and marched because all the women trying to take our space need to know that we do not have the same women’s liberation that they were feeling in that moment. Indigenous women like Darlene, like Marie, like myself are fighting against our own people who have now willingly become the Indian Agent, dealing out injustice, land theft, housing insecurity and ongoing human rights violations across Turtle Island. Many of us may have been on separate roads, but they all lead us to the same issue: our own folks are oppressing us using old Canadian laws. First Nations governments are accepting and embracing those governance laws that are not our own. They are not our laws developed for and by us. They are not our way of governance and never have been.
Another reason I came down from Muskoka for the march was to hold space for Indigenous women, whose voices are often forgotten about and left out of conversations about equal rights. Canadians believe that Indigenous people are making progress when they see women like Jody Wilson-Raybould appointed as justice minister by Justin Trudeau or former Liberal candidate and practicing lawyer Trisha Cowie as success stories to Canadians. They ask: How can Indigenous women not celebrate success when they have such successful women representing them in the state of Canada?
In my opinion, these women are not leaders that I would ever look up to. These are not Indigenous women who are helping other Indigenous women but women who work towards furthering the interests of Canada. When the “Hon.”Jody Wilson-Raybould announced the backing out of the Liberal campaign promise of full implementation of UNDRIP into Canadian law, although not a surprise, it still felt very treacherous to me. I needed to be at the Women’s March to educate Canadians that this is happening here and now to our people by our people. That campaign promise very likely secured many of those record numbers of Indigenous voters, many of who had historically never voted in Canadian elections. Those interests Canada has are not even remotely similar to the fight for self-determination that the grassroots people have been fighting for generation after generation. 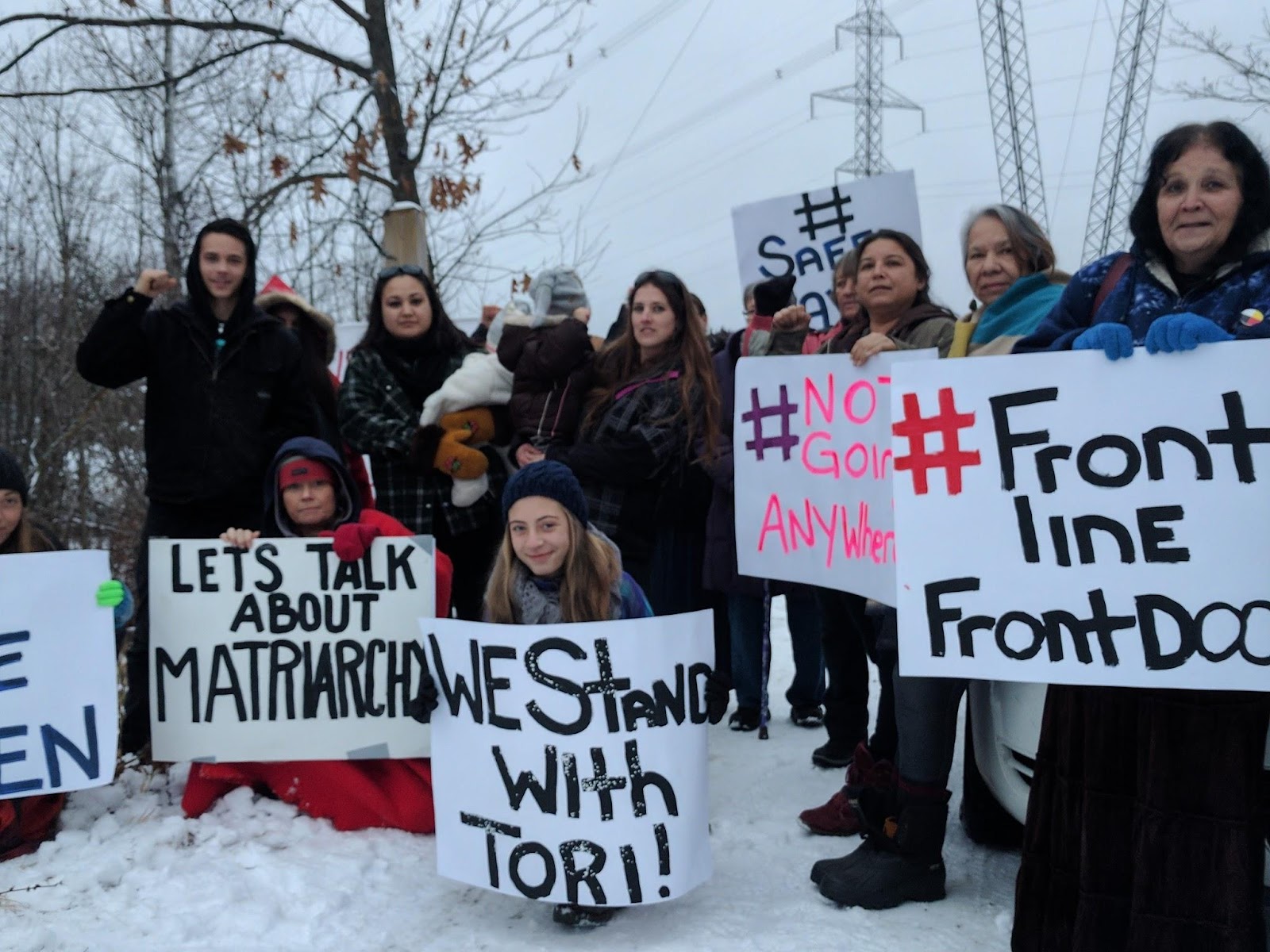 If these non-Native people at the march had the ability to look in closer within our communities, they would be able to see marginalized people like my family and I, who are current targets of our own successful people like Trisha Cowie. You would see those who use Canadian laws to perpetuate housing insecurity, land theft, suppression of the people’s voices and ejection from the communities where they have built their lives. The laws on reserve are not the same as in the rest of Canada and it is quite common for our folks in power to oppress and deny basic human rights from those without power. Maybe the Canadian government thought they were helping Indigenous families when they passed Bill-S2 into law but unfortunately the MRP laws have been absolutely inaccessible for the families those changes had been designed to protect. I was at the march to make this fact known to those who believe they are united in protecting women’s rights, while some of us are on decades-long lonely struggles for a small scrap of alleged equality.  Ask Sharon McIvor or Lynn Gehl about their struggles for equality for Indigenous women and their children. Ask me about about the inaccessibility of the matrimonial property rights on a reserve after the breakdown of your marriage, on a reserve that is not your own.I was at the Women’s March because so many of us couldn’t be there because of the oppression Indigenous people are all facing both on and off the reserve. I was there because our Indigenous voices are left out of women’s liberation conversations time and time again. I was marching because after hundreds upon hundreds of years of assimilation and genocide policies created by dead white christian men, our communities still suffer together under the archaic Indian Act policies, which were meant to be the beginning of our end. Those laws are still in place but the only difference now is that they are being used by our own people to continue the oppression by many so-called community leaders, on the lands our ancestors tried so hard to protect for the future. I am that future. The fight passed on to me continues. 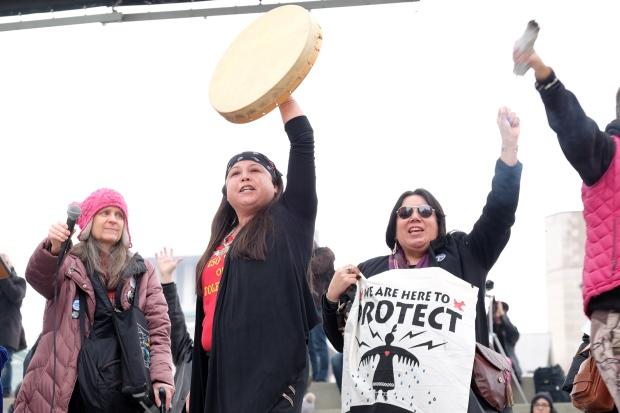 One of the biggest reasons I came to the march was to make sure the Indigenous Women’s voices were represented on this historic day. I came to counter the federal Liberals narrative of progress for Indigenous folks. I came because those same women politicians who were marching with me are telling Canadians untruths. I wanted their audience to realize that all is not well for Indigenous women, men, non-binary people, and children in the state of Canada and they need to ask us what is really happening to us. I went to let Canadian women know that within the laws of the Canada, I am not their equal. Our children are not their children’s equal in the eyes of the federal government. We are still fighting for equality in your systems.


As I sit here I keep wondering, will you all still be there for the 27th Annual February 14th Women Memorial rallies and marches being planned across the country? I know we cannot expect all of you, but I hope to see many more of you representing your sisterhood in solidarity, like we did for you on the January 21st Women’s March. Whether you show up or not, I will continue to march on towards a just future for my descendants even when I have to do it almost alone at the front line, at my front door. Tori Cress/Negonzit Kwe
Anishinaabe Nation