Red Feather -- 'Time to Stand Up and Be Lakota'

Red Feather: Time to Stand Up and Be Lakota, Time to Stop Kissing BIA's Ass


By LAST REAL INDIANS
Is there any Native Nation actively supporting the #NoDAPL camp north of the cannonball river? Woke elder Helen Red Feather speaks Lakota, telling Tribal Leaders to stop kissing the BIA's ass, and by extension the US Army Corp and the ND Governor, Republican legislature, and the collusion with local ND media and DAPL mercenaries. It's time to be Lakota. #NoDapl Where is your heart?
Red Feather said, "Time to stand up and be a Lakota now!"
"They poisoned me."
"I've been here eight months."
"I'm not leaving. I'm on Treaty Land." 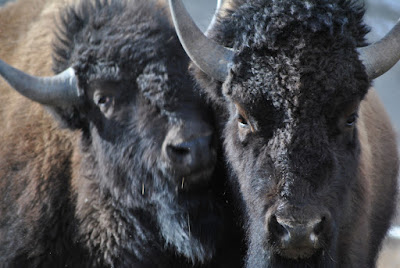 Photo by Buffalo Field Campaign
The capture, transport  and slaughter of  the Yellowstone Bison is abhorrent to the traditional life ways of all indigenous peoples, and an abrogation of Tribal treaty subsistence hunting rights. -- Carol Dubay, Pablo Montana Flathead Nation

To:  All State of Montana legislators and Governor Bullock     From: Carol Dubay  -Pablo MT Flathead Nation
Feb. 17, 2017
Censored News                                                        I urge the Montana legislature to repeal MCA 81-2-120, and instead enact a law to manage bison similar to the wild elk management model in Montana.The capture, transport  and slaughter of  the Yellowstone Bison is abhorrent to the traditional life ways of all indigenous peoples, and an abrogation of Tribal treaty subsistence hunting rights. This is an unlawful, and unnecessary policy of destruction in violation of international law. Bison are not livestock, and should not be managed by the Montana Department of Livestock. Placing the Montana Department of Livestock in charge of wild, migratory bison is a continuation of the historic extirpation of the species, and a violation of the authority of the Hellgate Treaty of 1855 and the U.S. Constitution Article VI, as well as the International Covenant on Civil & Political Rights of  1966, to which the United States is a signatory. The inter-agency Bison Management Plan is a collusion of  federal and state agencies, and cooperating Tribes which are not adequately protecting national and Tribal historic living natural trust resources in Yellowstone Park, or within the State of Montana.  All of Montana is Indian country. The State of Montana  and Yellowstone National Park were created after the international treaty known as the Hellgate Treaty of 1855 was signed by representatives of the Salish, Kootenai, and PendO'Reilles Tribes recognizing the  United States of America. This international law and other treaties with various Indians specifically stipulates the hunting, fishing and gathering rights of the indigenous peoples in all usual and customary places would be honored throughout the Treaty territory in perpetuity.The State of Montana Department of Livestock continues a policy of catering to livestock industry intolerance of this native, keystone species.  "The highly controversial Inter -agency Bison Management Plan (IBMP) and all related mismanagement schemes would not exist if it weren't for MCA 81-2-120. The new bison management plan essentially mirrors the IBMP and holds little  to no benefit for wild bison.“These agencies need to evaluate an alternative that is culturally acceptable to the majority of American Indian tribes and is most beneficial for tribes with treaty rights in the Yellowstone ecosystem,” said James Holt, Nez Perce tribal member and board member  of Buffalo Field Campaign. “The alternatives that are currently being considered don't work for wild buffalo or American Indians.”  Additionally, the Inter-agency Bison Management Plan (IBMP) is the cattle industry approved plan called for in MCA 81-2-120. The IBMP would not exist were it not for MCA 81-2-120. In  other words, all of the intensive management actions made against wild buffalo--including hazing, capture, and slaughter--take place because of MCA 81-2-120. As implemented by the Department of Livestock, MCA 81-2-120 severely limits the abundance and distribution of wild buffalo to less than 0.3% of Montana's habitat. Wild bison remain  ecologically extinct in Montana and throughout the their historic range."As an  elder member of the Confederated Salish-Kootenai & PendO'Reilles Tribes of the Flathead Nation, I Carol Dubay, call for common sense to preserve and sustain the bison for the sake of the chidren's trust for the future. A bill must be written to repeal and replace MCA 81-2-120.Repeal  MCA 81-2-120=====================================================================================================Proclamation of Carol Dubay : A Call to “All Who Can Hear" to Come Help and Honor the Sacred Bison"I, Carol Dubay, elder member of the Confederated Salish-Kootenai & PendO'Reilles Tribes of the Flathead Nation invoke the inherent rights of the 1855 Hellgate Treaty to  hunt, fish & gather in all usual and customary treaty territories since time immemorial - for thousands of thousands of years.I am speaking for the Bison mothers and fathers who are crying for the unnecessary wanton destruction of their families. There exists serious controversies regarding the proceeding of Yellowstone National Park Bison  slaughter, and proposed quarantine & ship & slaughter schemes. The trust obligations of the United States of America to careful, responsible management of the sacred bison must be made real in practice to protect the genetic integrity of the last wild bison.The unwarranted quarantine policies and practices mandated by federal and state agencies, such as the National Park Service, U.S. Fish & Wildlife Service and the Montana Department of Livestock are direspectful ,  wrong and adverse to Indigenous peoples' traditions and Treaty rights. Specious science is being used to eliminate wild free roaming Bison, and eliminate their landscape and habitat.The Federal and State, Tribal trust obligations to conserve and protect cultural trust properties for Tribal communities and Tribal peoples through the U.S. Constitution and the 1855 Hellgate Treaty and State of Montana  Constitution are not being honored by the irrational, non-traditional culling of the Yellowstone Bison.The historic and traditional cultural properties and lifeways of the various Tribes that inhabited, used and occupied the territories and areas in and around Yellowstone Park in Montana, Wyoming, and Idaho are not  being properly protected or respected by the State and Federal governments.Tribal Peoples have to help lead the way back to a respectful relationship with the Bison and all of creation. Implementing Treaty rights is mandatory to ensure the future survival of our sacred bison and their traditional  grass land and mountain landscapes. I invoke the international rights of all of the children of mother earth for all future generations to enjoy and share communion with the sacred bison, and their prairie and mountain landscapes.
at February 17, 2017 No comments:

Zapatistas -- 'Stop the assassinations of Rarámuri Defending Their Territory!' 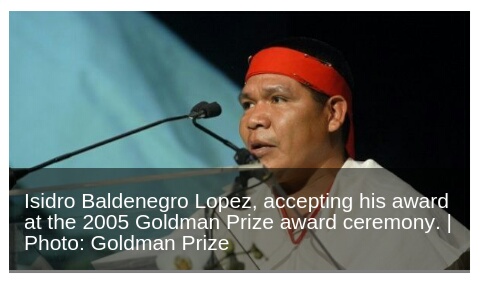 Joint Communique from the National Indigenous Congress and the Zapatista Army for National Liberation in Solidarity with the Rarámuri People
Stop the assassinations of Rarámuri Indigenous Compañeros Defending Their Territory!(Chihuahua is the state south of New Mexico and Texas)
Indigenous Territories of MexicoFebruary 4, 2017To the people of Choreachi,To all of the Rarámuri People,To the Indigenous Peoples,To the people of Mexico,To the peoples of the world,We learned today of the murders of Indigenous Rarámuri compañeros Juan Ontiveros Ramos and Isidro Baldenegro, both of the community of Choreachi in the municipality of Guadalupe y Calvo, Chihuahua, yesterday February 2, and 15 days ago, respectively.We urgently denounce these new acts of barbarity against compañeros known for their commitment to the struggle of their people for the recuperation of their territory, which was taken over 40 years ago by large landowners/ranchers and organized crime.As the National Indigenous Congress and the Zapatista Army for National Liberation, we are in solidarity with the Rarámuri People who have been so hurt by these murders, now totaling 18 homicides committed against their communities since 1973, four of them in the last year.Compañeros and compañeras, you are not alone! We accompany you in your pain, we open our hearts to the tireless struggle you are waging against organized crime and the landowners backed by the bad governments, and we offer you our support as indigenous peoples of this country who are organizing ourselves to defend our lives and our territories.STOP THE ASSASSINATIONS OF INDIGENOUS PEOPLE IN STRUGGLE!NEVER AGAIN A MEXICO WITHOUT US!NATIONAL INDIGENOUS CONGRESSZAPATISTA ARMY FOR NATIONAL LIBERATION
at February 17, 2017 No comments:

Zapatistas -- 'The Walls Above, The Cracks Below (And To The Left)' 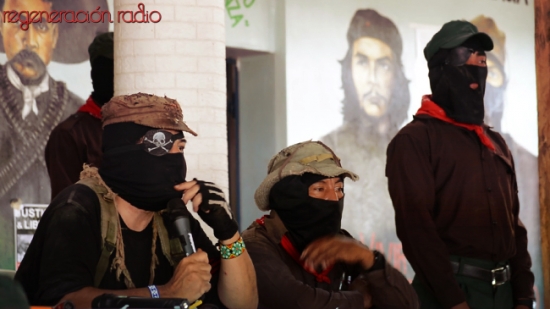 The Walls Above, The Cracks Below (And To The Left)

The Walls Above, The Cracks Below
(And To The Left)
February 2017
Translations at http://enlacezapatista.ezln.org.mx/

The Storm On Our Path
For us, as Zapatista originary peoples, the storm—the war—has been going on for centuries. It arrived to our lands with the lies of the dominant civilization and religion. At that time, the sword and the cross bled our people dry.
Over time, the sword was modernized and the cross was dethroned by the religion of capital, but it continued to demand our blood as an offering to the new god: money.
We resisted, we always resist. Our rebellions were displaced by the dispute between various forces for Power. Those forces, always from above, demanded that we struggle and die to serve them. They demanded obedience and submission under the guise of liberating us. Like those who said and say they fight, they came and come to rule. There were supposed independences and false revolutions, those past and those to come.
Read more »
at February 17, 2017 No comments: