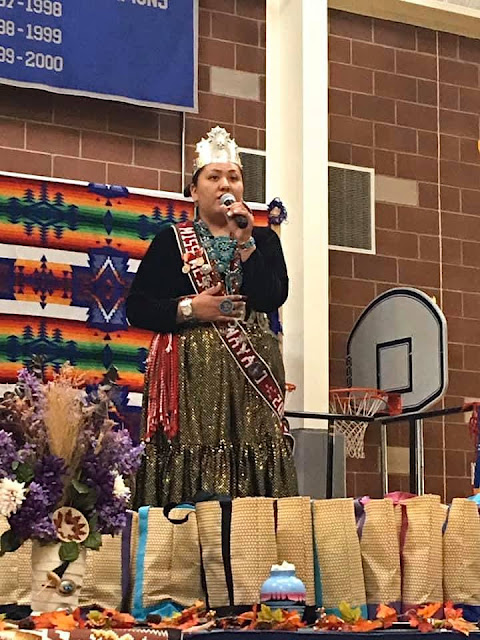 The Navajo Nation mourns the loss of former Miss Western Navajo Nation Valentina Blackhorse, as the coronavirus spreads through bordertown nursing homes in New Mexico claiming the lives of elderly and eleven Navajo police tested positive for the virus. On the Hopi Nation, there are 35 cases and two deaths.

"On behalf of the Navajo people, they offer their sincerest condolences and prayers to the family, colleagues, and friends of Valentina Blackhorse," Navajo President Jonathan Nez said.

President Nez stated that Valentina was a loving person who gave so much to her Nation and her Diné people. "Our Nation’s leaders were very saddened to learn that Valentina passed away on April 23rd due to COVID-19. At the time of her passing, she was employed with the Division of Community Development (DCD), and devoted much of her time to helping the Nation’s 110 chapters. DCD Executive Director Dr. Pearl Yellowman remembered Valentina as a loving person who was very compassionate about helping others," President Nez said.

In the past 24 hours, there were 97 new cases and one more death related to COVID-19 on the Navajo Nation. The total deaths are 59 and 1,637 cases. There is a total of 7,393 negative test results. The total COVID-19 tests administered is 9,660, with some test results pending, the Navajo President's Office reported.

The Navajo Nation also reported that 17 police officers and staff have tested positive for coronavirus, raising alarm to Navajo people because Navajo police are manning the roadblocks as curfews are enforced. Currently, the third 57-hour weekend curfew is underway, with nightly weekday curfews also enforced.

The State of New Mexico reported three deaths at Cedar Ridge Inn nursing home in Farmington, one in a McKinley County facility, and two at Uptown Genesis health facility in Albuquerque. Farmington is a bordertown to the Navajo Nation. Gallup and Red Rock facilities are located in McKinley Country, bordering the Navajo Nation. There are now coronavirus cases in nursing homes and acute care facilities in Farmington, Santa Fe, Gallup and Albuquerque, reports the State of New Mexico.

In San Juan County, New Mexico, in Farmington and Aztec, five nursing homes and assisted living homes have staff and residents that have tested positive for COVID-19. Those facilities are: Aztec Healthcare, BeeHive Homes of Farmington, Cedar Ridge Inn, Life Care Center of Farmington and Welbrook Rehabilitation Center.
One Native survivor of coronavirus says to those who want to open businesses: 'You can reopen, but you can not get family members back." He and his wife tested positive, and his wife's mother died from coronavirus. He also describes how difficult it was for him to get tested. Watch video. 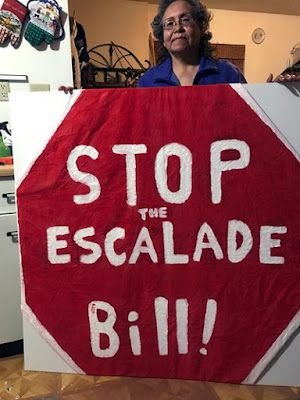 Rita Bilagody, a Tuba City area resident, led the fight against Phoenix developers, who proposed to develop a tourist resort at Grand Canyon East Rim, in an effort to save the confluence of the Colorado and Little Colorado rivers. Rita often referred to the development proposal as “The Monster.” The Navajo Nation Council killed the idea in 2017.

This is Bilagody’s description of the powerful infection, as she speaks from the Tuba City medical center.

"I want to be very clear on one thing: I unknowingly caught this virus from another who didn’t know they had it either. I was not out traipsing around, violating curfew. (If you know me at all, you know I dislike going into Tuba City anyway!)

"This virus is very vicious and deadly and it’s silent until it wraps your body in its unrelenting grasp and it won’t let go. I remember that when I was fighting the escalade, I used to call it a Monster. Now we have a much larger, invisible, and deadly Monster in our midst. You have NO idea who has been exposed and that person can be standing right next to you or talking to you." Read more at Save the Confluence: https://savetheconfluence.com/people/she-thought-she-knew-which-monster-to-fight-until-the-coronavirus-came-along/

Meanwhile, as aid begins to arrive on the Navajo Nation from grassroots groups and the State of New Mexico, Dineh say the distribution of aid to those in greatest need has become one of the problems since many chapter houses are closed during the tribal government shutdown.
On social media, Dineh are pleading for help for elderly parents, and doctors and nurses at Navajo area hospitals are pleading for masks and gowns. 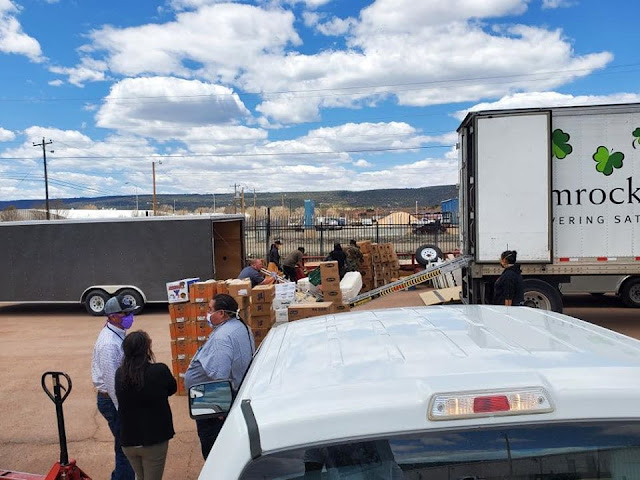 The grassroots Navajo Hopi Families COV-19 Relief organized by former Attorney General Ethel Branch has received $1 million in donations and is currently distributing food, water and supplies to the elderly and immune-compromised. The grassroots group is struggling to provide help during the limited hours when there is not a curfew. Donate here.

A medical team from the University of California San Francisco arrived on the Navajo Nation. The team of 14 nurses and seven doctors traveled to the Navajo Nation to provide critical health-care support in the COVID-19 pandemic. Providers will be working at three hospitals in Arizona and New Mexico for the next month. 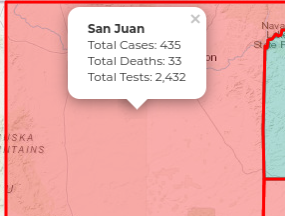 New Mexico State reports the high death rate for San Juan County, which includes the Shiprock area on the Navajo Nation and the Farmington area. Nursing homes in Farmington are reporting deaths. Deaths are also reported in Sandoval and Bernalillo Counties, which includes numerous Pueblos in New Mexico.
https://cvprovider.nmhealth.org/public-dashboard.html 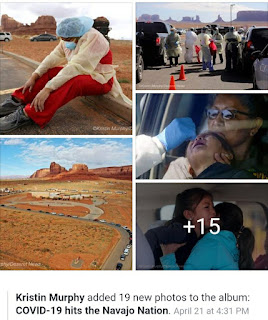 Read about Utah State's coronavirus testing in Monument Valley and how Dineh are struggling in this hard hit area along the Arizona and Utah border.
Dineh elderly died from the coronavirus at Navajo Mountain, Utah, after attending a rally of the Nazarene Church in Chilchinbeto, Arizona, where the first cases were reported on the Navajo Nation.
Photos by Kristin Murphy, Deseret News.
https://www.deseret.com/utah/2020/4/20/21223003/delivering-lifelines-unique-mobile-lab-brings-tests-answers-to-hard-hit-navajo-nation-coronavirus
Arizona coronavirus cases and deaths increase on Navajo Nation and in southern Arizona 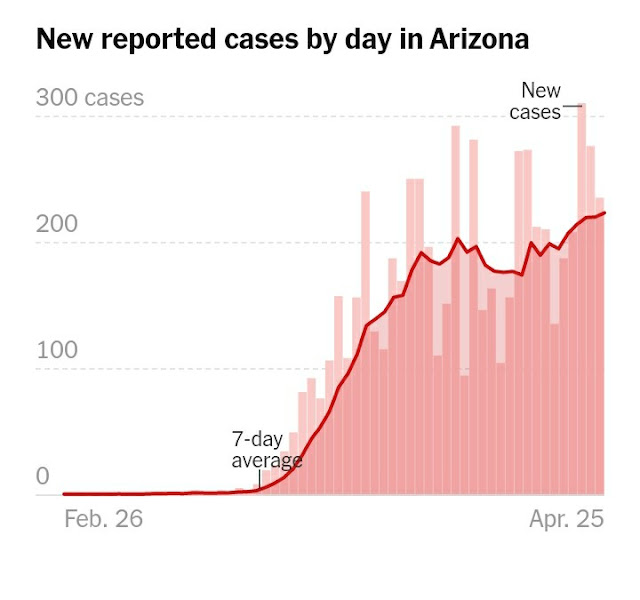 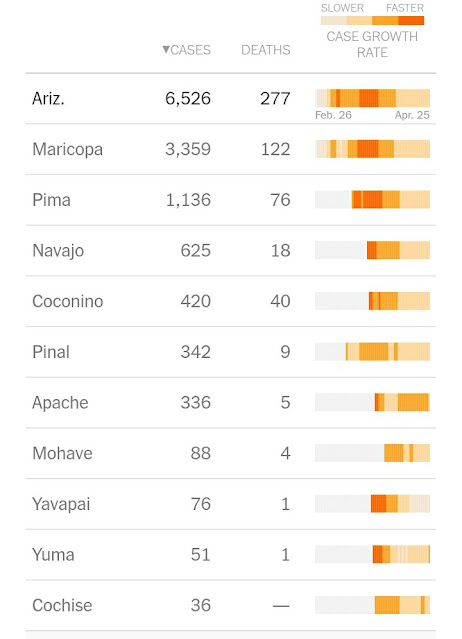 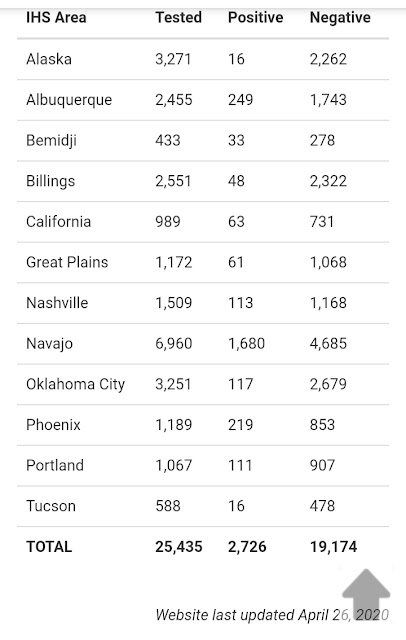