North Dakota law enforcement admits that it had little experience, and no policies in place, when it fired rubber bullets, tear gas, and other chemical agents into Standing Rock Water Protectors.

Among 178 agencies named in the militarized buildup for the benefit of Dakota Access Pipeline is the unlikely agency of US Customs and Border Patrol. The report confirms that North Dakota Game and Fish was responsible for aerial spying on Standing Rock camps. 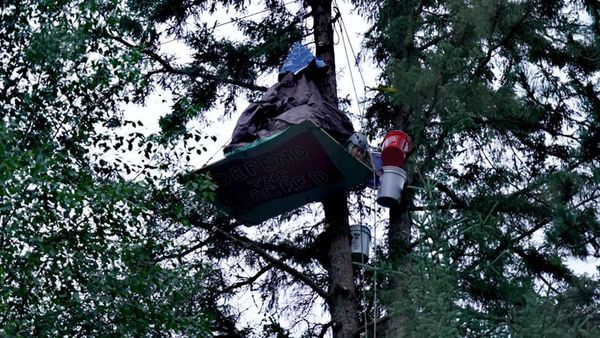 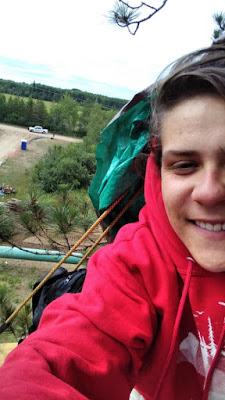 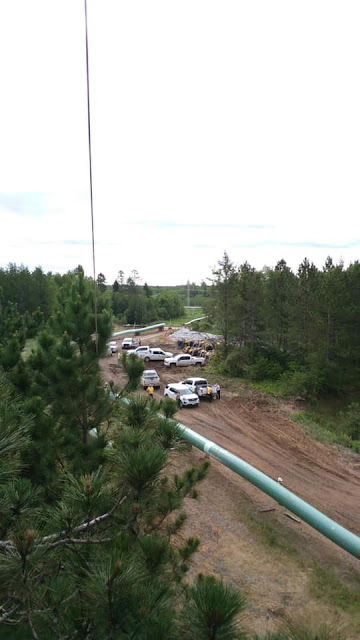 LAKE WASHBURN, Minnesota -- Today, two Indigenous water protectors blockaded an Enbridge Line 3 worksite in tree sits directly anchored to the pipeline, while two others crawled into a pipeline segment. The sits follow 14 lockdowns at another Line 3 worksite last week, including one Indigenous matriarch.
Enbridge has begun drilling rivers across northern Minnesota, including the Willow River, where it appears construction hit an aquifer while drilling yesterday. Drilling mud was documented spreading into the river as a “spill kit” sat ashore.
Police repression has dramatically escalated in recent weeks, as Hubbard County sheriffs blockaded Namewag camp and continue to randomly issue citations since the initial riot line. One vehicle was cited while attempting a water delivery to the private property encampment.
Over 500 people have been arrested to date fighting Line 3 destruction of Anishinaabe treaty territory and expansion of the fossil fuel industry as climate crisis rages across the planet.
JD, White Earth Anishinaabe, said, “At this point it should be obvious why anyone would take action against the fossil fuel industry. The ocean is on fire, heat waves are killing people by the hundreds. We are in the middle of an extreme drought, our wild rice beds, lakes, and rivers are drying up. And while they dig up our Mother for Line 3, the bodies of our relatives are being dug up from the grounds of boarding schools. They are people who were taken from us as children, who never got to have children of their own, to live their lives. I am thinking of generations of relatives that are not here with us. My elders, aunties, uncles, cousins, and peers I will never know on this Earth. But my Grandma survived and that’s why I am still here, proud to be Anishinaabe. These colonial governments have done everything they can to kill our land, kill our culture, kill our people, but they will never kill our spirit. We will never go willingly to our own destruction. So today I sit in the path of this pipeline, tomorrow it could be you.”
From inside the pipe, Water Protector Magpie said, “As a descendant of settlers, it’s my job to stand up to white supremacy, and doing what I can to disrupt projects like Enbridge’s Line 3, which perpetuates climate chaos and brings destruction and violence to Anishinaabe territory is part of that. We must do everything we can. We are running out of time.” 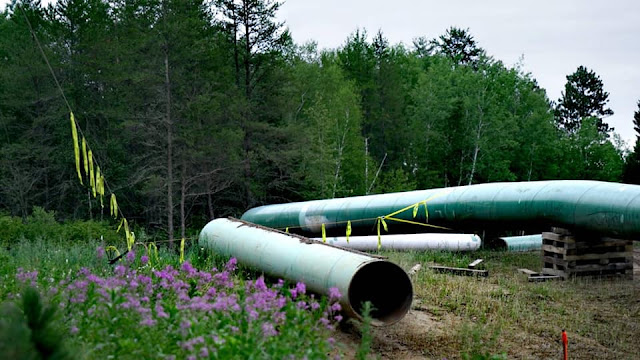 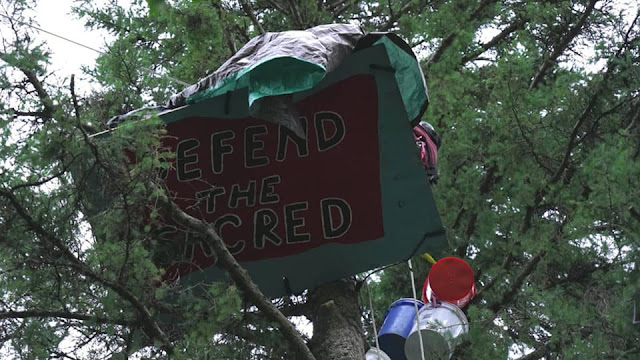 Giniw Collective is an Indigenous-women, 2-Spirit led frontline resistance to protect our Mother, defend the sacred and live in balance. We stand unafraid. Prayers into action. Follow us on Facebook, Twitter, or Instagram @GiniwCollective
at July 07, 2021 No comments: