Ophelia Rivas: In solidarity with Yoeme and Zapatistas: Words to Indigenous Peoples Conference in France

Ophelia Rivas: In solidarity with Yoeme and Zapatistas: Words to Indigenous Peoples Conference in France
Ophelia Rivas, exposing the abuse of the U.S. Border Patrol and Israel's Elbit Systems surveillance towers on her homeland, the Tohono O'odham Nation, told the Indigenous Peoples program in Nantes, France, on Wednesday, she stands in solidarity with the Yoeme (Yaqui) warriors in Sonora, who have been kidnapped and assassinated, and the Zapatistas. Speaking by teleconference with the gathering, Ophelia said the construction of the spy towers disrupted burial places.

O'odham means people, Tohono means desert, we are desert people. Our vast homelands became occupied by the Republic of Mexico and the United States of America. The International boundary displaced O'odham in the two countries.

The foreigners imposed a census, to count and number each person, they imposed education that removed children from their families, they imposed family separation to try and dismantle our culture.

The O'odham VOICE Against the WALL started as an organization when it witnessed the armed military called the border patrol force my elders, all from ages 60 to 80-years-old,  were forced to their knees with heavy weapons pointed at them, and asked to produce proof of citizenship in a language the Elders did not understand. 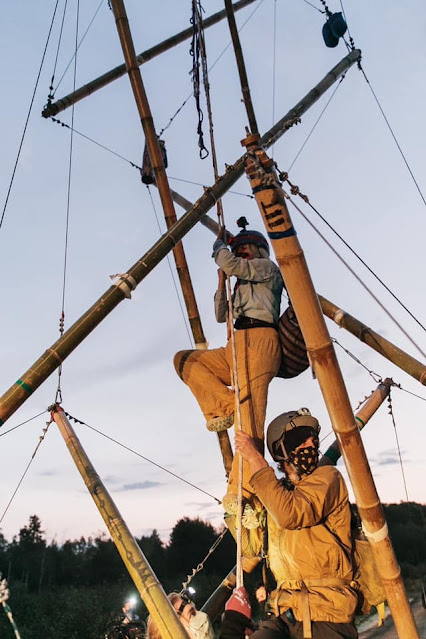 Water Protectors Block Line 3 Pump Station with Aerial Structure Never Before Used in Western Hemisphere
By Giniw Collective
Censored News
August 25, 2021
Contact: giniw@protonmail.com
SWATARA, Minnesota -- This morning, Water Protectors erected an aerial blockade in front of a Line 3 pump station, the kind of good trouble that has inspired over 700 people to be arrested standing up for Mother Earth in northern Minnesota.
Read more »
at August 26, 2021 No comments: