Russell Means, Lakota, speaks about beating cancer. He remembers his brother Ted Means who is now with the ancestors. He also speaks of his wife Pearl Means, Navajo, who was with him throughout his treatment for throat cancer.
"I am essentially cancer free now. I will not die of cancer," Russell said as he prepared to leave Scottsdale, Ariz., where he was treated. His doctor is going to fund and rebuild his school on Pine Ridge.
"I want to make sure the Republic of Lakota is an international entity, recognized."
"I want to make sure my people know what freedom is all about."
Russell speaks of this society of convenience.
"America as a worldwide force is over," Russell said.
at December 12, 2011 No comments:

Watch video, above, by Pan Left Productions in Tucson 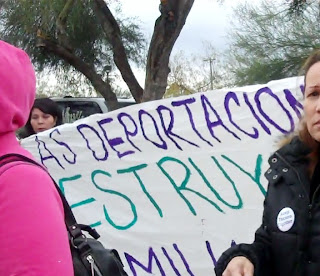 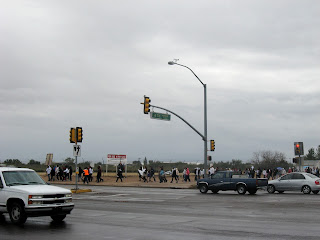 TUCSON -- After a morning ceremony, walkers marched to Immigration and Customs Enforcement, ICE, headquarters here in the cold light rain, to deliver their petitions. Undocumented individuals, their families and supporters petitioned Immigration and Customs Enforcement officers to immediately close their immigration cases.
Today walkers marched to end the fear of their families being torn apart by deportation, and being separated from their children, parents, spouses and other loved ones.
The petitioners presented ICE with extensive evidence of their ties and contributions to the Tucson community. All qualify for deferred action under President Obama’s guidelines, yet their cases remain open. At any moment, they could be torn from their homes and loved ones, No More Deaths said in a press statement.
Mario Gamez, Tucson father of five and one of the petitioners, said, “We want to talk about the community and how families are affected by deportation. People are separated from their children, husbands, and wives. We are here today to make sure that President Obama’s promises are kept.”

Nearly 300,000 cases are currently awaiting review by the immigration courts; given this immense backlog, the Department of Homeland Security has instructed its agents to identify individuals whose deportations are not in the Administration’s interest to pursue. DHS agents are to conduct case-by-case reviews—considering a number of factors including length of time in the country, family ties, and educational background—and have the authority to close cases deemed “low priority.” While this does not automatically grant legal status, it can provide immediate and badly needed relief to those who qualify.

Implementation of these enforcement priorities has been uneven at best. Across the country, many who qualify for deferred action continue to face the threat of deportation and separation from their families. No More Deaths and Keep Tucson Together would like to see immigration relief for all those facing the threat of deportation and detention in the broader Tucson community.

Among the 50 petitioners are the parents of 54 U.S. citizen children, three spouses of United States citizens, and six families with multiple members facing deportation. Many would qualify for the DREAM Act and some are themselves children, the youngest being 8 years old.

DREAMer Jose Christian Ramirez-Moreno, 20, was among those today.

“This is important because it could open a lot of doors for people like me, who don’t have papers but who want to keep on studying and fighting for this country," Ramirez-Moreno said.
at December 12, 2011 No comments:


Watch live streaming video from globalrevolution at livestream.com
FOR IMMEDIATE RELEASE: Military Veterans Join the 99% in December 12 West Coast Port Shutdown
Submitted by admin on Sat, 12/10/2011 - 15:58
Members of Iraq Veterans Against the War to march with 99%, call on fellow veterans, service members to join the movement.
OAKLAND/SAN FRANSISCO (December 9, 2011)—On December 12th, the Iraq Veterans Against the War (IVAW) Bay Area Chapter will march with the 99% as Occupy movements along the West Coast stage mass mobilizations to shutdown the hubs of commerce owned by the 1%.
Members of the IVAW Bay Area Chapter will Occupy the Ports to draw attention to the financial and human costs of the wars, and the ways in which veterans have been impacted by the economic and social issues raised by the Occupy movement. These issues include the challenges of veterans re-entering civilian life after war and trauma and during economic recession, and looming cuts to veterans’ health care and VA services. They also hope to help make veterans’ and service members’ participation in this movement more visible and deliberate.
Scott Olsen will join the IVAW Bay Area Chapter to march with the 99% in Oakland, CA—the city in which he was critically injured by a police projectile. Scott’s decision to demonstrate so soon following a serious injury is symbolic of the Occupy movement’s resilience following a series of nation-wide, coordinated crackdowns against the 99%. Scott doesn’t plan on backing down, neither does the movement; IVAW will be there, boots on the ground, to occupy the ports and show our support for the 99%.
#####
Iraq Veterans Against the War is nonprofit 501(c)3 advocacy group of veterans and active-duty US military personnel who have served in the U.S. Military since September 11, 2001. IVAW currently has over 1,400 members in fifty states, as well as in Canada, Europe, Iraq and Afghanistan.
New York police harass and arrest journalists today. Watch video: