MNN:  JULY 26, 2012.  A picture speaks a thousand words.  In the Montreal Gazette of July 26, 2012, appears a montage of 277 athletes.  This is Canada’s Olympic team heading for London. It appears like Canada is working toward an almost 100% white team, with a few black, Asian and brown.
237 athletes, or 86%, are of the white race. Whites are not 86% of the population of Canada.  People of color now make up almost 50% of the Canadian population. They will be a minority within 20 years.
No Indigenous appear to be on the team, the people whose land this is. Canada [Kanata] is a Mohawk word.  This is the best team that can be created by the restrictions set by the corporatist states.  The Olympics showcases the superiority of one group over another by awarding fake medals.
These athletes are the children for the most part of the upper middle class, who have the opportunities.  Our children rarely make it in this system.
Darwin, Malthus and others experimented in creating a superior white race. It was found that three generations of inbreeding created nut bars or docile compliant people. So what kind of experimentation is going on now?  Are Russell Williams, James Holmes, the Craiglist killer and others experiments gone wrong?
Selective breeding is causing their men to become sterile and their women to become infertile.  They now have the lowest birthrate in the world, while natural people have the highest.
Whites need technical apparatuses and artificial environments to give them an advantage, like pools, ski equipment and other gewgaws.  In a fair competition of natural abilities, people of color are stronger, more agile and have greater endurance.  What if white athletes competed fairly with people of color?  There might be a completely different representation.  Just look at football, basketball and other sports requiring stamina.  Other races excel.
What if they had to work long hours picking food, or in a factory for a few cents a day?  What if they came from a society with a high infant mortality, almost non-existent sanitation, malnutrition, toxic drinking water, diseases, war and political unrest?
What if basketball nets were lowered to give Japanese and Inuit the same access to the net? What if they had to compete with Indigenous in a boat race through the Amazon River? What if they had to cross the 50 degrees below zero tundra on a bobsled pulled by dogs?
England refused to let our teams compete in England as a nation with our own passports. They demanded we be part of the colonial nations that are squatting on our land, 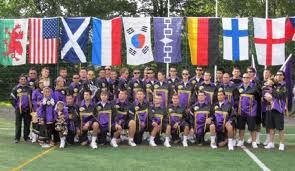 London is the center of eugenics research.  They try to design how a few can continue to live off the theft of land and resources from those who cannot even hope to attend the Olympics.