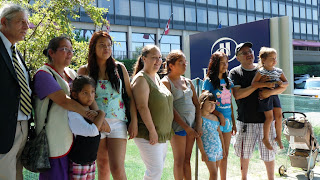 BURLINGTON, Vt. July 30, 2012—Members of the Innu First Nation from Quebec and the Nulhegan Abenaki of Vermont were denied access to the 36th Conference of New England Governors and Eastern Canadian Premiers this morning.

Around 9:30 am, while governors and premiers were discussing access to renewable energy, Charles Megeso of the Nulhegan Abenaki and Elyse Vollant, from the Innu community of Uashat-Maniutenam entered the Hilton Hotel and asked to speak with governors and have a seat at the table, according to Megeso.

According to Megeso, they were told by conference director John Shea, “we just don’t have enough room for you here. There’s not enough breakfast.”

“I told them, ‘you’re being very kind’,” Megeso said, “the Quebec government was just saying no. They weren’t comfortable with us being here.”

Vollant, who traveled 12 hours from northern Quebec with three of her children and one other family member, is opposed to Hydro-Quebec development on the La Romaine River and the Plan Nord. The delegation sees themselves as stakeholders in these projects who have not been consulted, and are representative of many other Innu families. Both projects threaten their traditional lands and cultures, which have been under attack from the Quebec government for the past century.

Vollant was arrested in March 2012 during a blockade near her community along Highway 138. The blockade was in opposition to Plan Nord, an $80 billion dollar industrial development project on indigenous land north of the 49thparallel in Quebec. 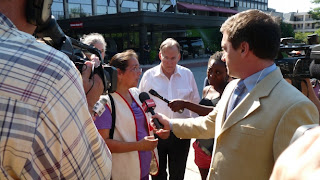 While being denied access to the conference, the group remained calm and cooperative. Megeso said, “I made it clear to the authorities that we’re not here to protest, we’re not here to cause any dysfunction… we just came to ask for a seat at the table that we thought was [the Innu’s] right. It was quietly and politely disagreed.”

While the voices of First Nations people were silenced at the conference, a delegation of Chinese officials, including vice-governor of Heilongjiang Province, Liu Guozhong, were given 15 minutes of floor space to address the governors and premiers on trade and the Chinese economy.

According to Megeso, “The Chinese have invested a lot of capital into a lot of these places…the dam on the Yangtze River was built by engineers from Hydro-Quebec."

After being denied access to the conference, Vollant and Megeso, supported by members of Red Clover Climate Justice Collective, held a press conference on the lawn in front of the Hilton.

Megeso told reporters, “[the conference] is a power brokerage. This conference is a formality. The agreements have already been made. This is just a party for the leaders to get together to pat each other on the back.”

Megeso was present to provide solidarity to the Innu, and to help them tell their story to the governors, premiers, the press and residents of various New England states who were represented during Sunday’s massive demonstration. He told reporters, “Every country in the world has indigenous people and they are treated the same way. It’s how this is done.”


Regarding the Innu struggle to stop Hydro-Quebec’s development of massive hydroelectric dams on indigenous land—much of which will power aluminum smelters, mining operations, factories, or be sold as “renewable energy” to New England states—Megeso said “I am not anti-energy. There is no such thing as ‘green energy’. There is a price to pay for whatever choices you use. The whole idea is the ‘how’ this is going to be done. And…the ramifications to the environment and to the people who are actually living on the land is not being taken into account.”