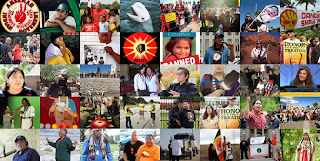 
Censored News bolts into its seventh year of publishing in October 2012. It has been a bumpy ride to keep it going. But always there are those who have no other place to post their news for a global audience. The worst offenders, like the US Border Patrol, Canadian mining corporations, the US government, and other human rights abusers are able to either co-op, or silence, most of the media.


The news reporters that can not be squelched are bought off. Then, too, some news reporters have simply just given up. The fight for truth has been too long and too exhausting for them. Others never really started the fight, relying instead on plagiarism and rewriting others hard work.

The good news is that it is a thrill to look online and see all the good hearts that are still out there doing it. And not many of them are reporters. At least not anymore. They are the warriors. They are the grassroots warriors, standing in front of trucks, locking down to heavy machinery, and saying no to the destruction of their homes, communities and the Earth.


They are the grandmother water walkers, the canoe paddlers, and those that live in uncertainty with US Border Patrol spy cameras pointed at them in the night.


They are the Indigenous in Guatemala and Peru being assassinated by mining companies. They are the truth tellers at Wikileaks. They are Anonymous revealing facts in a way that no one else can.

They are the keepers of tradition, the defenders of sacred lands, protectors of the old growth pines, caribou and Beluga whales.


So, as we come to the end of six years of publishing, Censored News celebrates all of you who are out there doing it, keeping it real, and refusing to give up, for the sake of the future generations and in defense of the earth.


Thank you to all of our readers, writers, photographers, translators, contributors, and well-wishers!

Censored News began in 2006 when reporter Brenda Norrell was censored, then terminated by Indian Country Today, after serving as a longtime staff reporter. Norrell is a former reporter for Navajo Times and served as a stringer for AP and USA Today during the 18 years she lived on the Navajo Nation. She has been a news reporter in Indian country for 30 years, covering the western US, and traveling with the Zapatistas in Mexico.

The original Censored posted in 2006, with articles censored by Indian Country Today, is at http://bsnorrell.tripod.com/


Censored News www.bsnorrell.blogspot.com is a service to Indigenous Peoples and other grassroots people engaged in the defense of human rights and the protection of the Earth. Censored News continues with no advertising.
brendanorrell@gmail.com

http://tarsandsblockade.org/transcanada-torture/
yesterday two Texans, Shannon Bebe and Benjamin Franklin, were subjected to torture tactics at the hands of police under the active encouragement of TransCanada senior supervisors. Bebe and Franklin were exercising their constitutional rights to nonviolent protest when they locked themselves to Keystone XL construction machinery outside Winnsboro, Texas and delayed construction for most of the day. Police began using aggressive pain compliance tactics when a senior TransCanada supervisor named John arrived and actively encouraged it. Torture tactics included; sustained chokeholds, violent arm-twisting, pepper spray, and multiple uses of Tasers, all while blockaders where in handcuffs.
Immediately following TransCanada’s consultation, law enforcement handcuffed the protesters’ free hands to the heavy machinery in stress positions and then subjected to repeated torture tactics by four police officers while TransCanada employees stood by and watched.
With the news that their friends had been tortured with TransCanada’s approval, the eight original tree sitters were bravely joined by another, expanding the tree blockade further as TransCanada’s clear-cutting heavy machinery rapidly approaches. Construction is roughly 300 yards away from the tree blockade. All refuse to come down until TransCanada halts its dangerous pipeline project.
Read more: http://tarsandsblockade.org/transcanada-torture/
at September 26, 2012 No comments: