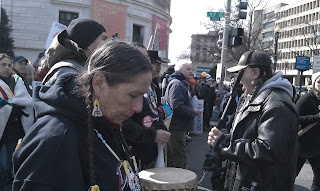 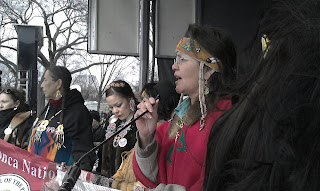 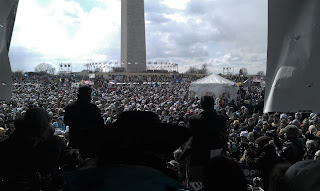 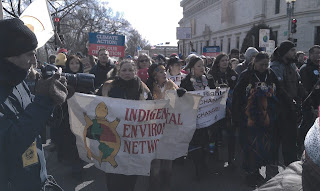 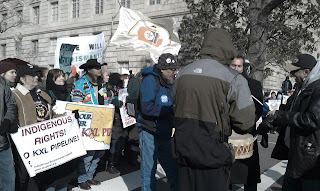 Streamed live on Feb 17, 2013
The Largest Climate Rally in History: February 17, 2013 on the National Mall in Washington, D.C. RSVP today or find more info at ForwardOnClimate.org. Presented by 135 different organizations and their members, including 350.org, the Sierra Club, the Hip Hop Caucus, Greenpeace, the Chesapeake Climate Action Network, Green For All and Forecast the Facts.
at February 17, 2013 No comments:

On Tuesday, February 19, 2013, the End Streamline Coalition will hold apress conference in front of the Evo A. DeConcini Federal Courthouse at 12:30pm.  The Coalition will announce local and national days of action (February 19-21) to call for an end to the federal district court program known as Operation Streamline.

Every day as part of Operation Streamline, at least 70 migrant men and women are collectively processed and given criminal sentences prior to their deportation.  Most, if not all of these migrants are sent to private prisons where companies profit handsomely from their incarceration. In 2011, contracts with Immigration and Customs Enforcement (ICE) accounted for 20 and 14 percent of revenue for CCA and GEO Group, respectively.

As discussion of Comprehensive Immigration Reform mounts in Congress, Senator McCain and the “gang of eight” have proposed an expansion of Operation Streamline and other federal felony prosecutions of people crossing the Mexican border looking for work or to reunite with family.

For many who have witnessed a Streamline hearing, the mere image of men and women shackled at the wrist, belly, and ankles being collectively herded through the legal process is enough to shock the conscience. Streamline raises serious and troubling questions about constitutionally protected due process, the growth of private prisons, the deepening criminalization of migrants and the exploding costs of contemporary immigration enforcement.

Press conference speakers will include Marcelo Ruiz, Isabel Garcia (Derechos Humanos), Caroline Isaacs (AFSC), Andy Silverman, and community faith leaders.  They will be accompanied by their supporters and a street theater performance.

The End Streamline Coalition is joining national organizations such as Grassroots Leadership, Justice Strategies, American Friends Service Committee, and the American Civil Liberties Union who will be participating in national Days of Action across the country in anticipation of the February 22 hearing in WashingtonD.C. on Operation Streamline and its possible expansion.

Here in the borderlands of Southern Arizona, the End Streamline Coalition demands an end to Operation Streamline and the system of migrant criminalization it reprsents.

COMPLEX ART OF PEACEMAKING
MNN: Feb. 17, 2013. The following informative well-done article was posted by The Cohoes Falls and the Iroquois facebook page,www.hiawatha.syr.edu https://www.facebook.com/TheCohoesFallsTheIroquois
“According to Haudenosaunee stories, a male child was born whose destiny was to address the condition of continuous warfare. The story of this man, who would come to be called the Peacemaker, gave form and substance to a kind of revolution in thinking.

In that time, people fought wars with clubs, traps, and bows and arrows. These were not what we today call weapons of mass destruction, but a solid club wielded by a skilled warrior was a terrifying weapon.
Any effort to seek peace had to be practical. In the days prior to the invention of states–just like in this current so-called age of terrorism–no one had the power to assure that everyone would stop the violence. There was an attention to practice, to how to make promises to one another that would be kept.
Under the Peacemaker’s guidance, the Haudenosaunee people developed a protocol to be followed when enemies first come together under a temporary truce. The protocol begins with a “condolence,” a short ceremony in which the two parties acknowledge each other’s humanity and the losses and sacrifices that each had suffered. The two parties would meet in the middle of the forest, and one side would say to the other something like this:
“We’ve been engaged in combat, and you’ve come out of the forest, and you’re covered in the bracken of the forest; we see that on your clothing.”
“So the first thing we do is we brush your clothing off, and clean off all the stuff that shows that you’ve been in a war.”
The next thing they do is they brush off the bench that the man is going to sit on, and make it clean and ready.
One side passes strings of wampum to the other, each string carrying a pre-set message. Your enemy then acknowledges these messages by repeating them back to you. They say things like this:
“With this wampum, I release the pressure in your chest. You’re feeling tight in your body from the struggle, so I release you from that,”
“With this one, I remove the tears from your eyes that you’ve been crying because of the people you lost in war.”
“And with this one, I release your vocal cords. I release your voice so you can speak strongly.”
They are addressing the conditions that can extend the truce. The first goal is to stop the fighting; a truce is not peace, but it is a small step in that direction.
The peacemaking process begins with some principles, one of which is symbolized by images of people casting weapons beneath a tree and burying them. This is, of course, entirely symbolic, just like modern disarmament is entirely symbolic, since you can always go out and buy more weapons. Likewise, the Indians could always go home and whittle more weapons, and in any case, they couldn’t give up weapons entirely because they depended on them for hunting and food gathering. So when they say they are putting the weapons of war under the tree, this is symbolic language meaning that they are not going to use them on each other anymore.
The second principle can be summarized in this statement: We are now going to put our minds together to create peace. The focus is on a desirable outcome that benefits everyone. One of the most famous quotations from Indians is from Sitting Bull: “Now let us put our minds together to see what kind of world we can leave for our children.” And another is out of the Haudenosaunee tradition now known as The Great Law of Peace: “Now we put our minds together to see what kind of world we can create for the seventh generation yet unborn.” Both of these are pragmatic constructions; both are about envisioning a desirable outcome and then negotiating the steps to go from here to the outcome that you want.”
MNN Mohawk Nation News kahentinetha2@yahoo.com  For more news, books, workshops, to donate and sign up for MNN newsletters, go towww.mohawknationnews.com  More stories at MNN Archives.  Address:  Box 991, Kahnawake [Quebec, Canada] J0L 1B0

SWARMING
MNN. Feb. 17, 2013. When the European military came to Great Turtle Island, they met Indigenous warriors who did not meet them head on. They attacked and disappeared into the woods. Our men used swarming to attack and defeat the much larger and better armed British and French formations. Behind our fighting groups we had a democratic organization. There were natural loyalties among us that glued us together. It was defensive. The colonists ended up having to deal with us as equals.

Indigenous guerilla warfare.
Idle No More utilizes this strategy. Hierarchical governments cannot deal with this. They will break down. Soon Canada has to deal with the Indigenous people’s natural government formations.
Hierarchy is becoming powerless. The internet is changing the way people get information and communicate. It empowers smaller units. From the large to the few, to the small and the many! It is breaking the spell of corporate hegemony and capitalism over society.
Hierarchy works at controlling people. The Idle No More movement shows there is no way to control grassroots Indigenous people. Power is being devolved into small units, which are interconnected. Global conflicts are being reshaped. The existing order will be overturned because the power is in the people.
Swarmers know hierarchical power is artificial and against the natural way. Hierarchies need a target. There is none. One minute they are there and then they just disappear. Hitting back at nothing is not winning. We the people have power and are using it. We can be visible or invisible. Internet spreads information more effectively than mass media. New thoughts are being spread to the public independent of mass media, which has lost its brainwashing power. We can listen to anyone we chose. Swarmers can be unorganized or well organized. They are everywhere.

Ancient war games.
To combat swarming, like the “Idle No More” sudden formations in shopping malls and elsewhere, the US military is developing “BattleSwarm”. The military is broken down into small units. Pods operate in clusters. It won’t work because they are not based on natural affiliations.
Thinking for ourselves is a human survival spirit. Swarming reflects the human instinct to make connections. It demonstrates the social will in each of us to think and act for ourselves and to help our people. We work together, use our minds to help and defend ourselves from abusers. There is no mastermind. It strikes from all directions and then withdraws. The interconnection is on a subconscious level. They move from place to place, do something and disappear into the night. It is as though one mind is in control.
Corporate Canada has seen that their band and tribal council apparatus is totally ineffective in controlling us. We urge the councils, don’t coddle up to the powers that are out to kill us. Don’t stand in front of the enemy and ask for anything. We warn you, don’t put on the fascist uniforms and help the colonizers eliminate our people to save yourselves. Just get into their boat and be on your way.

One People. One Fire.