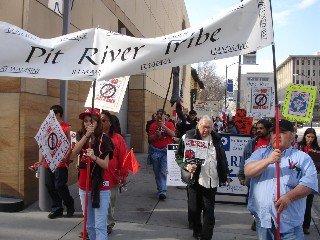 BURNEY, Calif. – On February 15, 2013, The Pit River Tribe unanimously affirmed a resolution opposing geothermal and other industrial developments in the sacred Medicine Lake Highlands.
The resolution affirms that geothermal development would threaten the underlying aquifer and would result in the injection of toxins into the atmosphere and waters. Further the Tribe maintains that the construction and development of even a single geothermal power generation plant would result in irreversible impacts to the sensitive cultural resources of the highlands and devastate the habitats of plants and animals.  The Tribal resolution calls upon the Bureau of Land Management and the United States Forest Service to reject all proposed geothermal development in the sacred Medicine Lake Highlands.

The Pit River Tribe has been in court since 2002 over proposed development of geothermal energy in Medicine Lake Highlands.  The Tribe has successfully challenged the extension of leasing of their sacred areas in decisions in the 9th Circuit Court in 2006 and 2010.  The lease holder, Calpine Energy, must reapply for extensions of the leases that the Tribe maintains were illegally issued by the BLM in 1988.  Such applications for lease extensions are expected to trigger an environmental impact statement under the National Environmental Policy Act.  In the mean time, the applicant has scrapped the original plan to build a 48 megawatt power plant and is reported to be leaning towards building several 100 megawatt plants in the sacred highlands.

The Pit River Tribal resolution indicates that the new proposals are incompatible with the use of the Medicine Lake Highlands as a sacred area. Geothermal development in such a sensitive hallowed place will despoil the environment and harm the Pit River Tribe.  The resolution invokes the responsibilities of the federal agencies under federal law, regulations, agreements, executive orders and the United Nations Declaration on the Rights of Indigenous Peoples to remind the decision makers of their responsibilities to protect sacred places and the people.