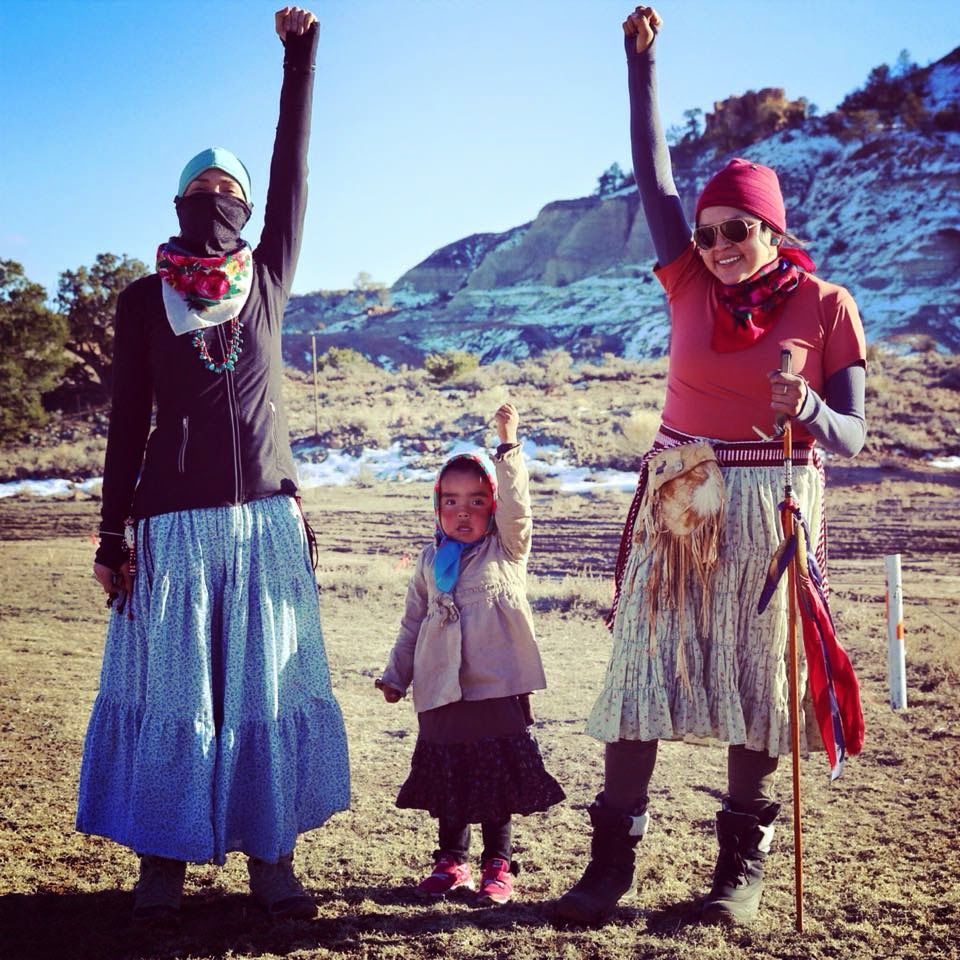 Journey for our Existence
Today's Censored News photos from Dineh Walkers against Fracking, now in Counsellors, N.M., on Navajo Nation with snow!
Top Photo: "Here's to good women, may we know them, may we be them, may we raise them."
photo by: Makai Lewis

BLM Farmington Holds Pipeline Public Meeting
But Refuses to Let the Public Speak
Press statement
Farmington, NM—Braving dangerous road conditions and inclement weather, approximately 80 members of the public turned out Tuesday night for Farmington’s sole public meeting on the proposed Piñon Pipeline, only to be told that the public would not be allowed to speak.
In a January 1st Bureau of Land Management news release announcing the meeting, BLM stated,“The BLM considers opportunities for public involvement to be critical to the success of the planning process.” When people, many Navajo and some travelling nearly 200 miles to attend the meeting, tried to voice their concerns, however, they were informed by BLM that they were not allowed. In addition, BLM gave no formal spoken presentation on the project, relying solely on poster board stations with limited information on the project.
“BLM Farmington has been an underperforming, rogue office for many years,” said Mike Eisenfeld, New Mexico Energy Coordinator for the San Juan Citizens Alliance. “But this is a new low. Inviting the public because their involvement is critical and then ignoring what they have to say is outrageous, especially when these folk made such an effort to participate. I guess this is democracy BLM-style going through the motions”
“If it wasn’t clear before,” Tim Ream, Climate and Energy Campaign Director for WildEarth Guardians said, “it should be now. The only people BLM Farmington listens to are the oilmen getting rich off our public lands. This is an embarrassment that should be felt all the way back in Washington.”
The proposed 140-mile pipeline would cut a swath through Navajo communities and the greater Chaco Canyon cultural heritage area. Thus far, BLM has refused to commit to studying pipeline impacts through a comprehensive environmental review and admits it does not have a legal plan for horizontal drilling development in the Mancos Shale, the very drilling that is driving this project. Additional public meetings are scheduled for Lybrook on Wednesday and Santa Fe on Thursday. The public attending will expect to be heard at those meetings.
Mike Eisenfeld, New Mexico Energy Coordinator, San Juan Citizens Alliance,
(505) 360-8994 mike@sanjuancitizens.org
Tim Ream, WildEarth Guardians’ Climate and Energy Campaign Director,
(541) 531-8541, tream@wildearthguardians.org