Video: Muskogee-Creek Phillip Deere 'On Being a Natural Human Being' 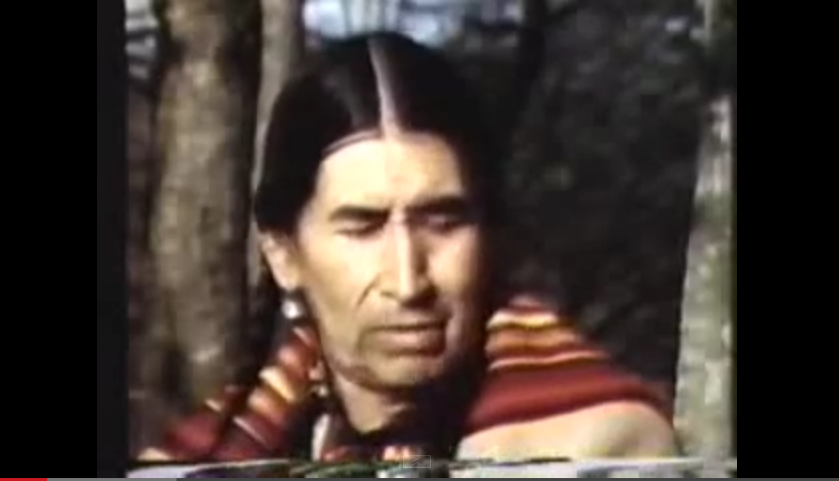 'Majority Can Be Wrong,' A Conversation with Phillip Deere, Muskogee-Creek Elder

"I don't believe in majority. Majority can be mistaken."

In this rare interview, Muskogee-Creek elder Phillip Deere describes the return to ancestral ways and traditional spiritual ways. Deere describes how tribal councils often result in disagreements, while the ancestral government has the true teachings. He said the tribal councils were created by white men, the white government.
Deere, spiritual adviser to the American Indian Movement, describes the contentment when one turns to the ancient spiritual ways. Deere, born in  1929, passed to the Spirit World in 1985. He was among those in the delegation to the United Nations Human Rights Commission in Geneva, Switzerland.
Describing the confused society, he says human beings are now so removed from the natural way of life with the foods they eat, and even minds are controlled like robots. This is the way of life that has been shoved on Indians. "There is no such thing as failure in life until you try to become someone else," he said. "There is nothing that can take the place of being satisfied and happy in life."
"One does not ride two canoes," he said, adding that a mighty wind will separate the canoes. This is the same when one tries to live two ways of lives.
"There is a feeling that has come over people, Indian awareness is here."
Deere says being Indian means more than beads and feathers.
"The Native people have preserved that way of life," he says of the natural way of life.
Other people had the circle, the sacred hoop of life, but they have lost it. 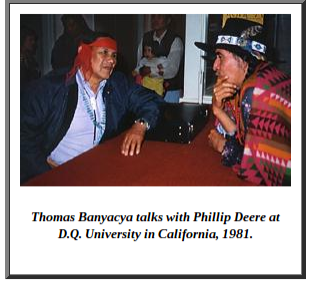 "It is only a human being way of life. But down through the history, people had lost the meaning of that circle."
"All natural things follow that circle."
"Within that circle, we found a way of life."
"No one fought over the Black Hills until the white man came here."
Deere points out there are many laws and plans in the government, like the reorganization act, but these programs and plans have failed. "We have to sit down and make our own plans."
Deere describes the takeover the BIA building in 1972, which he was part of, and of the Treaties.
Describing modern day education, he says the truth is hidden. In the universities, students still reflect the thinking of TV and John Wayne movies. History books do not tell the real story, such as the fact that George Washington had black children.
Deere said he doesn't need a racist judge to tell him who he is.
"It doesn't take an act of Congress to make it rain," he says, describing the acts of nature.
Columbus did not discover this land, he points out.
"I don't believe in majority. Majority can be mistaken."
Deere describes how this civilization as we know it, will come to an end. Perhaps, he says, the natural human beings will survive it.
Listen to Phillip Deere speak of Creation and the Creator, in the video above.

A most wise and still relevant discourse. Brought back to life and given new voice in this age of great confusion. Worthy of taking measure, of long and deep reflection with open heart and mind? Thanks so much for posting.