US and UK: Deadly game of entrapment

The US and UK undercover agents have been playing a deadly game of luring and entrapping their targets with a mix of intrigue, money and sex -- while the agents provoke and encourage violence with agent-created plots.

The formula that the US uses, as revealed in many court cases is this: The undercover agent flashes around money and/or sex, and urges violence. In more than one case in the UK, the undercover agents fathered a number of children.

This method of entrapment was made clear in the Earth First trial in Prescott, Ariz., in 1991. The FBI undercover agent had to drive the local environmentalists to do their monkey wrenching, because they had no ride. Another undercover agent, a snitch, spied on his ex-girlfriend and her new boyfriend in their bedroom as a babysitter. Most of the defendants still went to prison, regardless of the entrapment. Every time they made a joke on the phone it was considered a felony.

As a news reporter covering this trial, I asked the federal prosecutor about the ethics of using an old boyfriend to spy on his ex-lover in bed. The prosecutor said, "Well, everyone knows that snitches are sleazes."

This was a long trial, which I covered, along with Mike Lacey, creator of New Times. After it was over, Lacey wrote in New Times about this uptight federal prosecutor, something like: "She grabbed her balls and shot the judge a high five."

These investigations and trials not only cost years of lives, and lives, but millions of US dollars. The benefactors, of course, are the corporations who work as a team with the US government and the courts.

Many of the plots created by the US -- to lure and entrap -- are carried out. Those lured go to prison, and the role of the agents is often never known.

Environmentalists, however, aren't the only ones lured and entrapped in these ops. The agents keep going, and others are blamed for the violence, damage, hacking, etc. The lead criminals are often given plea agreements as informants, or silenced in other ways.

If they survive the ops, many get long prison terms. The US and UK use this method, targeting many youths who might have led different lives without the enticement and manipulation of agents, money and sex.

In other cases, there are infiltrators and those who spy on their friends. This includes persons questioned by police for minor or major offenses, or inmates in prison. They are pressured into becoming informants as part of plea bargains, to avoid prison or to get an early release from prison. Here’s some of the Earth First informants:
http://earthfirstjournal.org/newswire/informant-tracking/ 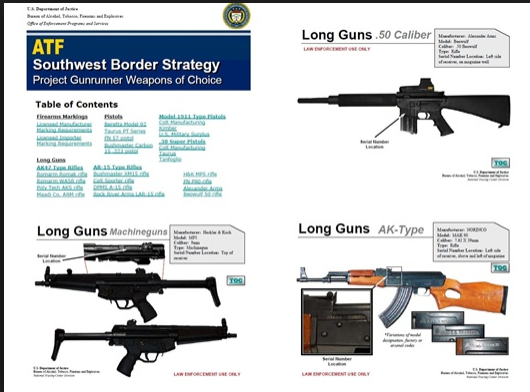 The United States Project Gunrunner is an example of one of the US operations that resulted in massive bloodshed, terror and murder. The US Alcohol, Tobacco and Firearms (ATF) ran guns, or as they say “let guns walk,” to Mexican cartels.

The US ATF said this was done to track the automatic weapons. However, those weapons have been used in the long term bloodbath in Mexico, killing the masses and contributing to the destabilization of Mexico.

In the US, few people seemed to care that the US was running guns to the Mexican cartels until a US Border Agent was murdered with one of those weapons near Nogales, Arizona.

A US Dept. of Justice document reveals that Project Gunrunner began on the Texas border in 2005 under the Bush administration. With these guns along the Texas border, the most horrendous crimes resulted. The gunrunning operation continued, under two more names: Operation Wide Receiver and Fast and Furious. This gunrunning is out of Tucson, Arizona, as documented by the media.

Globally, the US Army's operations manual states that guerrillas, 'insurgents,' are provided with weapons and whatever they need to carry out their agenda.

As for international operations, the truth still needs to be revealed to expose the role of US and UK undercover agents in creating plots and organizing individuals, which result in violence.

What remains to be revealed is the real intent of the US and UK in establishing these deadly plots. How many times are these agent-created plots carried out, with the violence spinning out of control, and resulting in violence and death.

UK: The Guardian
… But “Anna”, as she called herself, was no ordinary eco-protester. Really, she wasn’t one at all. She was an FBI informant under instructions to infiltrate fringe green groups and anti-capitalist networks and report back on their activities to the US government.
http://www.theguardian.com/us-news/2015/jan/13/fbi-informant-anna-eric-mcdavid-eco-terrorism