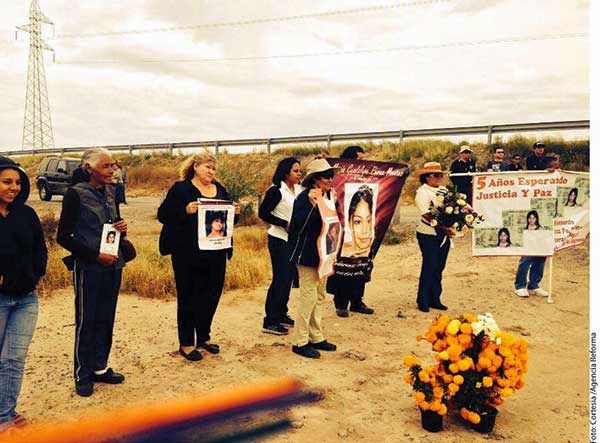 Women's/Human Rights News
The parents of Esmeralda Castillo Rincon recently heard sad news about their long-disappeared daughter. The 14-year-old had been missing from her Ciudad Juarez home since 2009, and the parents had waged a long campaign demanding her safe return.On January 16, however, the Chihuahua state prosecutor's office (FGECH) notified Jose Luis Castillo and his wife, Martha Rincon, that Esmeralda's remains were among those of other female murder victims recovered from the Navajo Arroyo in the Juarez Valley bordering the United States in 2012 and 2013.
Jose Luis Castillo, who has been among the most outspoken relatives in the family movement for justice, expressed initial skepticism of the news about his daugther at a January 24 press conference in Juarez."We aren't in a state of denial," Castillo was quoted. "We believe that the prosecutor's office should explain on what basis they have to say it is our daughter." A meeting between Esmeralda’s family and the FGECH is expected this coming week.In previous statements to FNS and other border media, Castillo contended that his daughter was in the clutches of human traffickers. The activist father said he was upset by the revelation that Esmeralda's remains had been in government storage since March 2013, even as the Castillo family was actively pressuring authorities for clarification about their daughter's disappearance and her safe return home.As part of their campaign, the family managed to get the Mexican federal attorney general's office to offer a 1.5 million peso reward for information regarding Esmeralda and her whereabouts.At the weekend press conference, Castillo charged there was a link between his participation in a January 14 protest during President Pena Nieto's visit to Juarez and the sudden notification of Esmeralda's fate only two days later.Esmeralda Castillo was among four victims from the Navajo Arroyo who were recently identified by Virginia-based Bode Technology, a company considered among the top-notch genetic identification services in the world. The FGECH earlier shipped nearly 90 sets of remains from the Navajo Arroyo to Bode Technology for identification.Two other Navajo Arroyo victims identified earlier this month include Lidia Ramos Mancha and Lilia Berenice Esquinca Ortiz. Ramos was a 17-year-old student at the Autonomous University of Ciudad Juarez's Biomedical Sciences Institute who vanished in December 2008, apparently while she was taking a bus through downtown Juarez.Born in El Paso but residing in Juarez, Lilia Berenice Esquinca was a 22-year-old U.S. citize who was reported disappeared following an excursion to purchase a cell phone in 2010.Lilia Berenice's mother, Lilia Ortiz, also reacted with skepticism to the report that her daughter was among the Navajo Arroyo victims. Ortiz said she would seek a new DNA test in El Paso to verify the identification, because of her doubts arising from the course of the official investigation.Many if not all of the Juarez Valley victims vanished in downtown Juarez. The girls and young women shared similar physical traits and socio-economic backgrounds. Moreover, their manner of disappearance and subsequent identification as homicide victims bore striking similarities to previous local cases of mass disappearances and clandestine burial grounds in and around Juarez. Going back 20 years, the list includes Lote Bravo (1995), Lomas de Poleo (1996-97), Campo Algodonero (2001), and Cristo Negro (2002-2003).Of all the body dumping grounds, the Navajo Arroyo has given up the most victims. With the identifications of Esmeralda Castillo, Lidia Ramos and Lilia Berenice Esquinca, the site so far lays claim to 15 known victims.A fourth new victim was identified this month, but the family of the victim invoked its right not to publicly reveal the individual's name, according to Chihuahua Special Prosecutor Ernesto Jauregui. The Mexican media reports as many as 26 victims may have been recovered from the secret graveyard.Since the summer of 2013, the FCECH has arrested more than a dozen suspects in connection with the Navajo Arroyo slayings, but the legal cases have dragged on without any convictions so far. Three women judges have been assigned to preside over the trial of 11 suspects that is expected to proceed under the new Chihuahua legal code sometime this year.For an earlier FNS story that included an interview with Jose Luis Castillo about his daughter Esmeralda's case, please go to:http://fnsnews.nmsu.edu/ciudad-juarez-and-ayotzinapa/Sources:. Lapolaka.com, January 24, 2015. Nortedigital.mx, January 15 and 25, 2015. Articles by Miguel Vargas. La Jornada, January 14 and 25, 2015. Articles by  Ruben Villalpando. El Diario de Juarez, January 13, 24 and 25, 2015.  Articles by Luz del Carmen Sosa, Francisco Chavez, and editorial staff.Frontera NorteSur: on-line, U.S.-Mexico border newsCenter for Latin American and Border StudiesNew Mexico State UniversityLas Cruces, New MexicoFor a free electronic subscriptionemail: fnsnews@nmsu.edu
at January 26, 2015