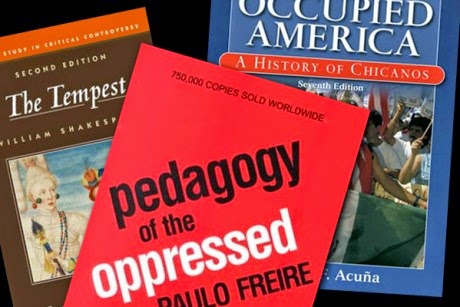 The banning of Chicano and Native American authors, and the Mexican American Studies program, in Tucson Public Schools, proceeds before the Ninth Circuit Court of Appeals on Monday.

The lawsuit is sure to attract more attention since the defendant, former Superintendent John Huppenthal, has recently claimed that a song by Rage Against the Machine is an instrument to overthrow the government.

Outrage was the response to the news that Tucson schools has banned books, including the book "Rethinking Columbus," with an essay by award-winning Pueblo author Leslie Marmon Silko, who lives in Tucson, and works by Buffy Sainte Marie, Winona LaDuke, Leonard Peltier and Rigoberta Menchu.

Among the authors in 'Rethinking Columbus' is Rosalie Little Thunder, Lakota, who passed to the Spirit World after the book was banned. Little Thunder was a voice for the buffalo at Yellowstone.

All books and materials of the forbidden Mexican American Studies classes were seized from the classrooms, in an act by school officials that traumatized students.

"The banning explicitly and pointedly shows it is not only Mexican American Studies and people and so-called illegal immigrants that are targeted but Indigenous studies and people as a whole," said Simon J. Ortiz, Regents Professor, at the Arizona State University Department of English, American Indian Studies.

In a statement today, People Power said, "The defendant, TUSD Superintendent, John Huppenthal, has criticized the Mexican American Studies Program as ‘a promotion to overthrow the U.S. government’.  Huppenthal’s most recent attack came on his last day in office as Superintendent, stating that a TUSD Mexican-American history class was in violation of Arizona’s legislature because of their use of the song 'Take the Power Back' by Rage Against the Machine in the classroom.

"The Arizona ethnic studies ban prohibits curriculum that 'promotes the overthrow of U.S. government or the Constitution, resentment towards any race or class, and/or advocates ethnic solidarity instead of individualism.'  The plaintiffs argue that the legislation is vague and is a violation of their Constitutional and Civil Rights.

"In the years following The Civil Rights Act of 1964, educators began to advocate for the inclusion of the history and accomplishments of ethnic minorities in school curriculum. Up until 1970, much of the U.S. educational curriculum had been essentially Eurocentric, foundationally highlighting European migrants accomplishments. The histories of most American minorities were omitted, and even the earliest Americans- Indigenous Peoples, were absent in many educational history books.

"Georgina Perez, an El Paso Librotraficante activist and founder of Tu Libro, an organization dedicated to the distribution of free bilingual and banned books to disenfranchised children, will travel San Francisco to speak on a panel at the Ethnic Studies Solidarity summit and teach-in on the Saturday leading up to the oral arguments. Perez, who advocates for the inclusion of Ethnic Studies in Texas, states: “Mexican American–Indigenous Studies is being attacked in Arizona and Texas, and this affects all our children. This is the only scientifically proven program that closes the achievement gap for the Xicano/Latino demographic… the denial of effective education is a denial of our human and civil rights.” The panel discussion, “Contemporary Ethnic Studies” will also include, Tony Diaz, founder ofLibrotraficante, an organization prompted by the Arizona legislation banning Mexican American Studies, Liana Lopez, co-host ofNuestra Palabra Radio, and co-producer Brian Parras.

"On Monday, Mission and Bay Area Aztec Danzantes will conduct a ceremony at sunrise at the courthouse and a press conference is scheduled on the courthouse steps after oral arguments," the statement said.

Meanwhile, Howard Zinn, author of A People's History of the United States, said of Rethinking Columbus, "The original edition made educational history by introducing a startling new view of Columbus … In the revised edition we get even richer material, a marvelous compendium of history, literature, original sources, commentary … an exciting treasure for teachers, students, and the general public." 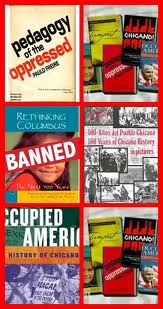 TUCSON -- Outrage was the response on Saturday to the news that Tucson schools has banned books, including "Rethinking Columbus," with an essay by award-winning Pueblo author Leslie Marmon Silko, who lives in Tucson, and works by Buffy Sainte Marie, Winona LaDuke, Leonard Peltier and Rigoberta Menchu.

Students said the books were seized from the classrooms and out of their hands after the vote banning Mexican American Studies, including a book of photos of Mexico. Crying, students said it was like Nazi Germany and they have been unable to sleep since it happened.

Suzan Shown Harjo's "We Have No Reason to Celebrate"
Buffy Sainte-Marie's "My Country, 'Tis of Thy People You're Dying"
Joseph Bruchac's "A Friend of the Indians"
Cornel Pewewardy's "A Barbie-Doll Pocahontas"
N. Scott Momaday's "The Delight Song of Tsoai-Talee"
Michael Dorris's "Why I'm Not Thankful for Thanksgiving"
Leslie Marmon's "Ceremony"
Wendy Rose's "Three Thousand Dollar Death Song"
Winona LaDuke's "To the Women of the World: Our Future, Our Responsibility"

All books in the Mexican American Studies classrooms were seized. The reading list includes two books by Native American author Sherman Alexie and a book of poetry by O'odham poet Ofelia Zepeda.

The list of removed books includes the 20-year-old textbook “Rethinking Columbus: The Next 500 Years,” which features an essay by Tucson author Leslie Silko. Recipient of a Native Writers’ Circle of the Americas Lifetime Achievement Award and a MacArthur Foundation genius grant, Silko has been an outspoken supporter of the ethnic studies program.

Biggers said Shakespeare’s play “The Tempest," was also banned during the meeting this week. Administrators told Mexican-American studies teachers to stay away from any class units where “race, ethnicity and oppression are central themes."

Other banned books include “Pedagogy of the Oppressed” by famed Brazilian educator Paolo Freire and “Occupied America: A History of Chicanos” by Rodolfo Acuña, two books often singled out by Arizona state superintendent of public instruction John Huppenthal, who campaigned in 2010 on the promise to “stop la raza.” Huppenthal, who once lectured state educators that he based his own school principles for children on corporate management schemes of the Fortune 500, compared Mexican-American studies to Hitler Jugend indoctrination last fall.
http://www.salon.com/2012/01/13/whos_afraid_of_the_tempest/singleton/

Imagine our surprise.
Rethinking Schools learned today that for the first time in its more-than-20-year history, our book Rethinking Columbus was banned by a school district: Tucson, Arizona ...

As I mentioned to Biggers when we spoke, the last time a book of mine was outlawed was during the state of emergency in apartheid South Africa in 1986, when the regime there banned the curriculum I’d written, Strangers in Their Own Country, likely because it included excerpts from a speech by then-imprisoned Nelson Mandela. Confronting massive opposition at home and abroad, the white minority government feared for its life in 1986. It’s worth asking what the school authorities in Arizona fear today.
http://rethinkingschoolsblog.wordpress.com/2012/01/13/rethinking-columbus-banned-in-tucson

﻿
Roberto Rodriguez, professor at University of Arizona, is also among the nation's top Chicano and Latino authors on the Mexican American Studies reading list. Rodriguez' column about this week's school board decision, posted at Censored News, is titled: "Tucson school officials caught on tape 'urinating' on Mexican students." http://drcintli.blogspot.com/

"The attacks in Arizona are mind-boggling. To ban the teaching of a discipline is draconian in and of itself. However, there is also now a banned books list that accompanies the ban. I believe 2 of my books are on the list, which includes: Justice: A Question of Race and The X in La Raza. Two others may also be on the list," Rodriguez said.

"That in itself is jarring, but we need to remember the proper context. This is not simply a book-banning; according to Tom Horne, the former state schools' superintendent who designed HB 2281, this is part of a civilizational war. He determined that Mexican American Studies is not based on Greco-Roman knowledge and thus, lies outside of Western Civilization.

"In a sense, he is correct. The philosophical foundation for MAS is a maiz-based philosophy that is both, thousands of years old  and Indigenous to this continent. What has just happened is akin to an Auto de Fe -- akin to the 1562 book-burning of Maya books in 1562 at Mani, Yucatan. At TUSD, the list of banned books will total perhaps 50 books, including artwork and posters.

DA Morales writes in Three Sonorans, at Tucson Citizen, about the role of state schools chief John Huppenthal. "Big Brother Huppenthal has taken his TEA Party vows to take back Arizona… take it back a few centuries with official book bans that include Shakespeare!"
http://tucsoncitizen.com/three-sonorans/2012/01/13/did-you-know-even-shakespeare-got-banned-from-tusd-with-mas-ruling/

The Latino Condition: A Critical Reader (1998), by R. Delgado and J. Stefancic

At the Afro-Asian Conference in Algeria (1965), by E. Guevara

A Different Mirror: A History of Multicultural America (1993), by R. Takaki

The Lone Ranger and Tonto Fist Fight in Heaven (1994), by S. Alexie

The Manufactured Crisis: Myths, Fraud, and the Attack on America's Public Schools (19950, by D. C. Berliner and B. J. Biddle

Red Hot Salsa: Bilingual Poems on Being Young and Latino in the United States (2005), by L. Carlson & O. Hijuielos

Address to the Commonwealth Club of California (1985), by C. E. Chavez

Saving Our Schools: The Case for Public Education, Saying No to "No Child Left Behind" (2004) by Goodman, et al.

The Circuit: Stories from the Life of a Migrant Child (1999), by F. Jimenez Note from NAIS: Crazy detail: even The Tempest from William Shakespeare is one of the ‘prohibited books’.

Murika, we can ban anyone's books we want!

When is the TUSD going to Schedule their official book burning bon fire ? Are we going to have to wear yellow arm bands "NA" or "CH" or BLK" after that? Why not? That's what the Nazis did in Germany and that's what the TUSD's actions look like. I thought our uncles and grand dads died so that such things couldn't happen here !

in order for the arizona mormons to rewrite history to fit their fraudulent fictional book of mormon hoax where they claim all blacks descended from native american while claiming dna is not a factor . the actual recorded anthropology and archeology books have to be altered and destroyed ? 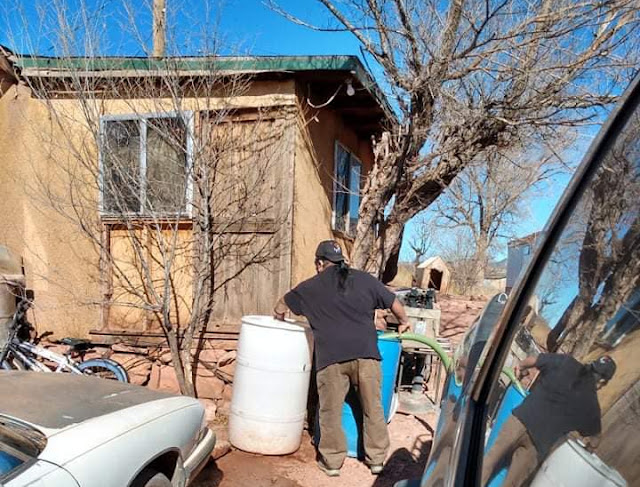