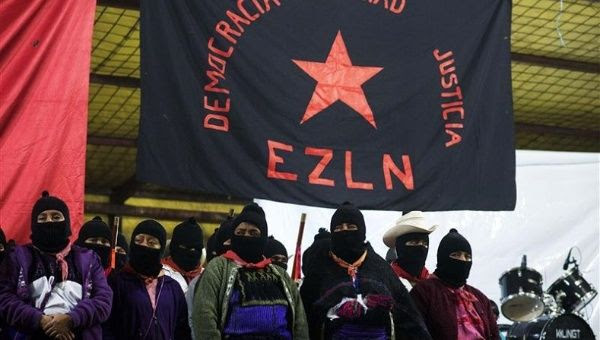 Zapatistas stand under the Zapatista flag during 20th anniversary celebrations of the armed indigenous insurgency in Oventic December 31, 2013. | Photo: Reuters

The rebel group issued an invitation to the parents of missing students to participate as guests of honor at events commemorating the 1994 uprising.
In a moving ceremony held during the commemoration of the anniversary of the 1994 uprising, members of the Zapatista National Liberation Army (EZLN) affirmed their support for the parents of the forcibly disappeared 43 students from the Ayotzinapa teachers' training college.
Read more at TeleSur http://www.telesurtv.net/english/news/EZLN-Affirms-Support-for-Parents-of-Missing-Mexican-Students-20150101-0028.htm
l
Posted by Censored News, publisher Brenda Norrell at January 04, 2015