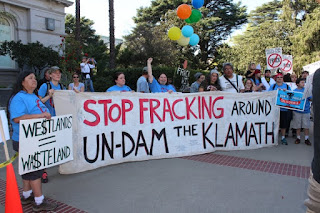 In response to one of my articles about offshore fracking, a reader asked, "What can we do here right now?" So here's my ten point plan to fight fracking and the destruction of our oceans and estuaries by fracking and other harmful activities by ocean industrialists and corporate interests.

1. People should support a complete ban on fracking in California, as called for by Californians Against Fracking and other groups. This can be done through local bans, as well as by putting pressure on Governor Brown to ban fracking statewide. Unfortunately, Brown has rejected the call for a statewide plan to date.

2. Activists should mobilize support for Senator Mike McGuire's SB 788, which I strongly support. This bill protects a marine protected area off the Tranquillon Ridge from oil drilling by removing an oil industry loophole in the California Coastal Sanctuary Act. I also urge folks to support Senator Holly Mitchell's legislation addressing the Refugio State Oil Spill. The only problem here is that I fear the oil industry will either defeat these bills, eviscerate them with bad amendments or get Jerry Brown to veto them if they ever pass the Legislature. (http://sandiegofreepress.org/2015/06/state-senate-passes-bill-banning-new-offshore-drilling/)

3. Activists should educate themselves about the role of the Western States Petroleum Association (WSPA) and Big Oil in California politics - and work to reduce their enormous influence by supporting movements like the Move to Amend and campaigns for more openness and transparency in California politics. (http://www.eastbayexpress.com/SevenDays/archives/2015/02/06/big-oil-group-spent-89-million-last-year-lobbing-jerry-brown-and-california-officials)

5. Activists should push for an independent investigation into the strange role of Catherine Reheis-Boyd, President of the Western States Petroleum Association (WSPA) as both a "marine guardian" and a Big Oil lobbyist. She must be questioned about what she knew about offshore fracking off the California coast while she was both serving as the WSPA President and the Chair of the Marine Life Protection Act (MLPA) Initiative Blue Ribbon Task Force to create so-called "marine protected areas" in Southern California. (http://www.calitics.com/diary/15750/lobbyist-for-oil-pipeline-company-oversaw-creation-of-fouled-marine-protected-areas)

6. Activists should pressure the Fish and Game Commission and Brown administration to permanently ban oil drilling, fracking, pollution, military testing and corporate aquaculture in marine protected areas, as the Marine Life Protection Act of 1999 empowered them to do.

7. Activists should begin organizing more creative, effective direct actions highlighting and bringing to public attention the oil industry's power in California, such as maybe doing a march on Chevron, Aeera Energy or WSPA offices in California.

8. More activists in Southern California should join with their sisters and brothers in Northern California opposing Jerry Brown's Bay Delta Conservation Plan (BDCP) to build the fish-killing Delta tunnels. If the Bay Delta Estuary, the largest estuary on the West Coast of the Americas, is destroyed by this project, it will greatly impact the salmon, halibut, anchovy, herring, sardine, crab, striped bass, lingcod, rockfish and other fish populations along the West Coast from Southern Washington to Southern California. And the water from the tunnels will inevitably go to support fracking and steam injection operations by the oil industry in Kern County. (http://www.indybay.org/newsitems/2015/07/09/18774688.php)

9. People should support the Pledge of Resistance campaign to fracking, oil trains and the Tar Sands pipelines that is starting to mobilize. Not everybody feels comfortable doing the more strident type of direct actions, but those who are willing to do so need to grow greatly in numbers.

We may not agree on everything, but at least there would be a forum to bring up these issues, network with one another and move forward on concrete plans and actions that we agree upon. I've found that many well meaning activists aren't aware of the direct, undeniable connection between the expansion of fracking in California and the Shasta Dam raise and the tunnels plan - and we need to better educate the activist community, as well as bringing new activists into the fold.

Before embarking on new organizing campaigns, people should incorporate the insights of experienced organizers, such as those Micah White, the cocreator of Occupy Wall Street, regarding the effectiveness of protests on the current political scene. (http://portside.org/2015-07-14/protest-broken-interview-micah-white)