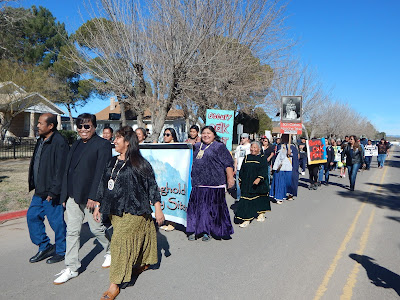 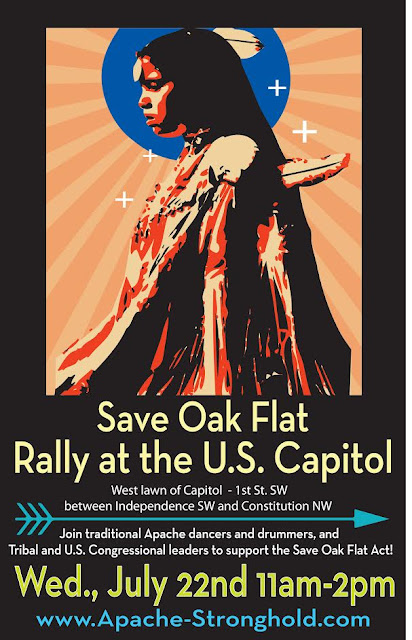 SAN CARLOS, Ariz. – A group of spiritual runners who are members of the San Carlos Apache Tribe, some from the Navajo Nation and others from other various Indigenous Peoples, began their journey from Dzil Ncha Si An (Mount Graham) on Sunday, July 5 and arrived on Monday, July 6, at Chi’Chil’Bilda’Goteel (Oak Flat) on ancestral Apache land deemed holy and sacred to the San Carlos Apaches and surrounding tribes.
Earlier on February 5, a spiritual march also began from the San Carlos Apache tribal headquarters to Oak Flat where occupation continues today.
The spiritual journey of the Apache Stronghold caravan led by Wendsler Nosie, Sr., former Tribal Chairman and now the Peridot District Council for the San Carlos Apache Tribe, first stopped at the Gila River and Salt River Indian communities for spiritual prayers.   On the Navajo Nation, they met with spiritual leaders.  After stopping at the Jicarilla Apache Reservation in Dulce, NM, members of the Tribal Council unanimously passed a Tribal Resolution in support of the H.R. 2811, a bill introduced by AZ Representative, Raul Grijalva to stop the implementation of Section 3003 of the National Defense Authorization Act which was passed last December 2014, that allows federal land at Oak Flat to be given to a foreign mining giant, Resolution Copper Company-Rio Tinto-BHP to construct a billion dollar mine while promising jobs.
Over 560 tribes passed a resolution at the last National Congress of American Indians (NCAI) convention earlier this month supporting H.R. 2811.
Stops have been made in Denver, CO, where Neil Young offered the pre-opening show to the Apache Stronghold.  Other spiritual prayers were also provided by members of the Sioux Nations in South Dakota when stops were made at the Crazy Horse Memorial and at Wounded Knee.  Radio, TV and newspaper interviews followed in various cities.  The convoy continued into Minneapolis, MINN and Chicago, ILL and were graciously greeted by those in support of the repeal of the land exchange.
The convoy will continue to a press event at the Harrisburg State Capitol and then to New York City to appear on Good Morning America and a flash bomb at the Times Square.
After traveling through Philadelphia, PA, the Apache Stronghold will arrive in Washington, D.C. onMonday, July 20 and prepare for the two-day spiritual gathering at the U.S. Capitol on Tuesday, July 21 and Wednesday, July 22 where tribal leaders and Rep. Grijalva and other members of the House and Senate will join the Apache Stronghold.
“If the U.S. is giving away federal land to a foreign company to build a mine that will desecrate our holy and sacred land, then just give it back to us and we will take care of it as we have been since time immemorial,” said tribal elder Audrey Johnson in her native San Carlos Apache language.
For more information, contact the Apache Stronghold at (928) 200-4401, Councilman Wendsler Nosie, Sr., (928) 200-5045, Chairman Terry Rambler (928) 812-0373, Vice-Chairman Tao Etpison (928) 812-4089, Tribal Archaeologist (928) 961-3380 or Administration Staff Member Sandra Rambler at (928) 951-6939. 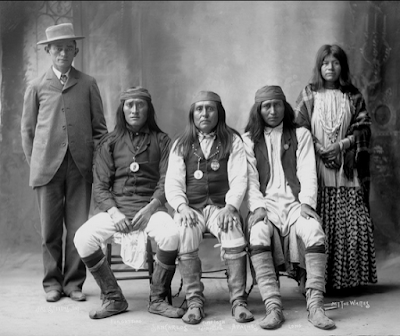 I walk along side you in spirit.