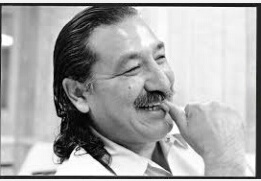 Most history classes will teach that United States' policy of Indian Termination was officially abandoned in the late 1960's.  Native peoples know all too well that many of the policies and goals of "termination' persist to this day. The beliefs that Indigenous people should abandon our traditional lives and culture, surrender even more of our ancestral homelands, and become "civilized," assimilated people are enacted through the continued desecration of our sacred sites, the use of our image as mascots, and in the environmental racism that has devastating effects on Native lives.

One of the few things I am able to do in this prison is follow the news from outside. It is good to see the Apache Stronghold Caravan to stop the desecration of Oak Flat, and supporters, organized and successful at getting the attention of the American media and the US government. Your spirit and strength helps lift my own spirit and gives me hope. The Apache people should know they are not alone in this struggle for survival, and the organization that works on my behalf offers you our support and solidarity.

Native people see all around us the continued disregard of our sovereignty, and of our human rights and treaty rights — at Oak Flat; the desecration of the sacred San Francisco peaks; for sport; in the continued occupation of the Black Hills; in the taking and poisoning of Mother Earth by extractive mining for uranium, coal and other minerals; and in the practices of fracking and drilling for oil and natural gas – all of which leave long legacies of poisoned water and air that sickens and kills our people.

If all nations would begin to respect and follow the principles and guidelines defined in the United Nations Declaration of the Rights of Indigenous Peoples, the tide could be turned from the direction of termination of tribes towards the survival and flourishing of all our relatives, our languages, our spirituality and also towards the healing of Mother Earth.

In the Spirit of Crazy Horse,