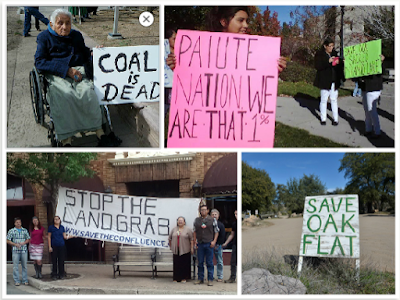 The theft of Native American land and water rights is accelerating. The failure of the media in Indian country to be present is accelerating the theft by Congress and corporate criminals.
By Brenda Norrell
Censored News

As usual, Native Americans with the fewest financial resources are forced to defend the land and water, including the Confluence from the Escalade development in western Navajoland. From the Lakotas on Pine Ridge fighting uranium mining, to the Apaches now on the caravan to save Oak Flat, to the O'odham on the border risking their lives while the weapons of the Border Patrol are pointed in their faces, it is always those with the least means that have to fight the US political criminals, their tribal partners in crime, and the media.

Here are troubling facts that the media in Indian country do not want you to know. First, Keith Harper, Cherokee -- whose law firm received millions out of the Cobell settlement -- was the US point man before the UN Human Rights Commission in Geneva in May. Harper was spinning distractions and cover-ups for the US government before the United Nations. Watch the video.

Second, Ho Chunk Inc. in Nebraska received $80 million from the United States government for domestic and international spying with an office at the Pentagon. Ho Chunk Inc. owns the Indian news website indianz.com . Besides the concern over the spy contract for its owners, Indianz.com does not have reporters that actually go out on news stories. Instead, indianz.com relies on copying and pasting, and rewriting, others peoples hard work.

As volunteers, Censored News and Earthcycles provide webcasting when we can. We provided web streaming and print coverage as it happened of the Peltier Tribunal and Boarding School Tribunal in Green Bay, Wisconsin, the past two years. There were no other media present. Where were the paid reporters? I haven’t seen a reporter from a national Native news website actually present on a news story in many years.

As for the Native news websites that do not have paid reporters, why not simply link to the hard work of others, instead of plagiarizing their work? If you never go out on a news story, you should be honest and tell your readers this, rather than deceiving them.

Indian Country Today reporters and editors have scammed their readers for many years. The reporters and editors plagiarize and rewrite others hard work, then conduct a brief phone call interview to deceive readers into believing they are actually out covering the news. The owners of Indian Country Today are extremely wealthy and do not need to rely on stay-at-home plagiarizers and stolen copyrighted photos. When the casino industry took control of the online Indian news in Indian country, reporters were replaced by stay-at-home plagiarizers and widespread deception.

Currently, there are no Indian country reporters in DC serving as watchdogs. Arizona Senator John McCain, the other Congressmen, and their corporate partners, find it easy to steal American Indian land and water rights, including the Apaches Sacred Oak Flat for copper mining.

Along with the Congressmen and corporate criminals, the publishers and editors in Indian country are equally to blame for deceiving readers, and their failure to be present on news stories. This is accelerating the theft of Native American land and water rights.

Many Native Americans have cashed their Cobell settlement checks without knowing whether those checks are payment for the royalties owed, or the price of giving up their ancestral land to the US Interior.

These Cobell checks to Native American land owners are often as small as $200, while non-Indian attorneys, including Keith Harper’s law firm, received millions from the Cobell settlement. Still, many Native landowners who cashed those small checks do not know if they gave up their ancestral land when they cashed their Cobell checks.

The bottom line with reporters and editors staying home and plagiarizing is not just the issue of profiteering for their paychecks from others hard work.

Along with the censorship in Indian country, there are distractions and fluff which prevent readers from knowing crucial facts. Those crucial facts include the role of US and Canadian mining corporations in the assassinations, rape and disappearances of Indigenous Peoples around the world. This censorship prevents authentic reporting from reporters actually at the border to reveal the truth about the US role in supplying assault weapons to Mexican cartels. The failed media do not have reporters on the border to expose US Border Patrol agents murdering with impunity and running drugs.

Elbit Systems of Israel, responsible for Apartheid security in Palestine, was given the border security contract by US Homeland Security. Now on the Arizona border, Elbit Systems is on the Tohono O'odham Nation building spy towers and pointing those at traditional O'odham homes. Where is authentic coverage by Indian country reporters who are present?

This censorship by the casino-dominated Indian news industry prevents the public from knowing the truth about casinos, including how the Tohono O'odham people are living in desperation while the Desert Diamond casino brings in millions, possibly billions, for non-Indians.

The longstanding conflict of interest between politicians and news reporters prevents readers from hearing the real story. This includes the story of Albert Hale, the former Navajo president who resigned during a financial probe of his office. He faced charges for theft and bribery. This came at the same time that the Navajo Times exposed his public extra-marital affair with his press officer. She became a reporter and editor in the national Indian news. When Hale resigned during the financial probe, he was quickly appointed to the Arizona Legislature by the governor to fill a vacancy.

As an Arizona Congressman, Hale was the first to push for the Escalade development which would desecrate sacred Navajo land and the Grand Canyon. The national media continues to avoid the issues, regardless of Hale's recent arrests.

As usual, Native Americans with the fewest financial resources are forced to defend the Confluence from the Escalade development in western Navajoland.

From the Lakotas on Pine Ridge fighting uranium mining, to the Apaches now on the caravan to save Oak Flat, to the O'odham on the border risking their lives while the weapons of the Border Patrol are pointed in their faces, it is always those with the least means that have to fight the US political criminals, their tribal partners in crime, and the media.

Brenda Norrell has been a news reporter in Indian country for 33 years, beginning at the Navajo Times, during the 18 years that she lived on the Navajo Nation. She served as a stringer for AP and USA Today while on the Navajo Nation. After serving as a longtime staff reporter for Indian Country Today covering the Southwest, she was repeatedly censored. She was terminated by Indian Country Today with no cause given in 2006. As a result, she created Censored News, now in its 9th year with more than 4 million page views, with no advertising or grants. It remains a labor of love.
brendanorrell@gmail.com