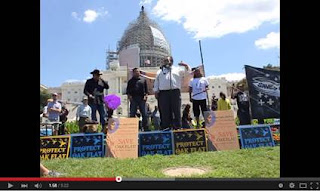 "This rally is about the importance of freedom and historical context," Rep. Grijalva said. "It's about realizing that a deal struck in the dead of night, which would not pass in the light of day, is undercutting the ideals that this nation intends to stand by. That deal tramples basic laws, basic rights, rightful sovereignty and sacred sites in the pursuit of profits and greed.

"No member of Congress should feel proud – or feel like they got away with something – by ignoring the needs and rights of the original Americans. Oak Flat is as sacred to the Apache people as any other church, temple, synagogue or mosque is to its congregants across this country. We should embrace and protect this land, just as we do these other places of cultural significance."

More information about the land swap orchestrated by Senators McCain and Flake, and Rep. Grijalva's legislation to repeal it, is available here.

You can learn more about the San Carlos Apache's journey here.