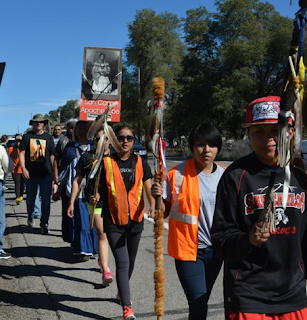 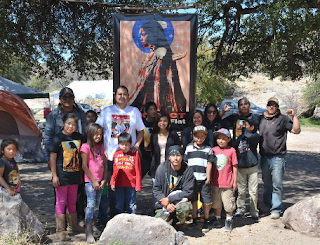 Phoenix, AZ - On Sunday, July 5th, Apache Stronghold will embark on a caravan through Indian Country to pick up supporters for a protest to be held at the nation’s Capitol July 21-22. The two week cross country journey will make stops in Arizona, New Mexico, Denver, Pine Ridge, Minneapolis, Chicago, New York City and other cities along the way. Oak Flat is an Apache sacred site located in the Tonto National Forest and is currently threatened by a proposed copper mine, which could be the largest in North America. The land was given to Rio Tinto through a midnight rider authored by Senator John McCain in December 2014.


Oak Flat, or Chi’chil Bildagoteel, was protected from mining since 1955, when President Eisenhower recognized the importance of this site and used an Executive Order to permanently protect the cultural and natural resources for future generations. Senator John McCain lead the charge to trade away this sacred land to a foreign mining company by attaching the land swap to a must-pass defense spending bill.


Support for Apache Stronghold and Oak Flat has been growing steadily since February 5, 2015, when members from the San Carlos Apache community walked together for 45 miles to Oak Flat in protest of the land exchange. Since February 7th, the Apaches have been camped at the proposed mine site and have vowed to remain until the proposal is cancelled. The group has held numerous events, gathering hundreds of indigenous supporters to the site. The encampment has drawn the attention of media across the country with stories appearing in the New York Times and on MSNBC. Thousands of people have signed petitions to repeal the land exchange or have the site nominated as a National Monument. Recently, the National Trust for Historic Preservation named Oak Flat as one of America’s 11 most endangered historic places.

The struggle to protect Oak Flat has connected the Apaches to a growing resistance movement of Native Americans campaigning against the destruction of sacred sites and environmental disaster throughout the United States. Two weeks ago, Congressman Raul Grijalva (AZ) introduced the Save Oak Flat Act (H.R. 2811), which would repeal the land exchange and return the land to public ownership.

Information on the caravan to Washington, D.C. can be found at www.Apache-Stronghold.com or on the Apache Stronghold Facebook page.


Sunday Campout at Oak Flat
Come to Oak Flat Sunday, July 5th to welcome the Mount Graham Spirit Runners to Oak Flat and send them off on their journey to Washington, D.C. The Apache Stronghold caravan will begin their trip to Washington D.C. from Oak Flat. Come to Oak flat on Sunday then consider joining them for the first leg (first stop salt River Pima-Maricopa Community) early on Monday, July 6th.
If you can support the Oak Flat encampment by spending some time there during the month of July while the Apache Stronghold Caravan travels to D.C., please sign up on this shared calendar. You can also find rides or offer rides to Oak Flat here and use the “look up code” Oak_Flat (you need to include the capital letters and the underscore between the words).
Also, please donate to Apache Stronghold today and share this link with your friends and family.