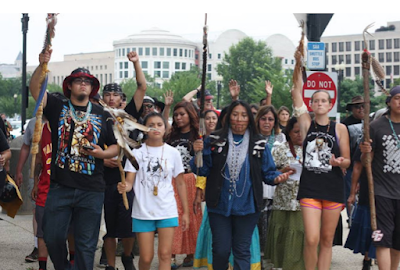 By Brenda Norrell
Vermont Sen. Bernie Sanders introduced a bill into the Senate on Thursday to undo the assault on Apaches ceremonial grounds of Oak Flat. The assault was earlier spearheaded by Arizona Sen. John McCain, targeting this sacred land with a massive copper mine.
Today, Native Americans are celebrating further as President Obama rejects the Keystone XL pipeline.
With their backdoor deals, the wealthy in Congress and the oil and gas industry have placed the financial burden of defending Mother Earth on Native American grassroots land defenders, often with little means.
Wendsler Nosie, Sr., San Carlos Apache Tribe Councilman and Member of the Apache Stronghold, applauded the introduction of the Senate companion bill to repeal the Land Exchange that would turn Apache ceremonial land into a massive copper mine for Resolution Copper.
Nosie said, “The Senate introduction is welcome news to residents of Arizona, Indian country, the United States, and the world. The bill shines light on the deceit used to enact the Land Exchange. As true leaders of this Country, the people have invested their hopes, dreams, and spirit into honest and transparent decision making for the good of all people. We must not fear to undo a wrong to make it right. For when it comes to the future of our children, this shouldn’t be difficult to do.” (Read the full statement: http://bsnorrell.blogspot.com/2015/11/sen-bernie-sanders-introduces-save-oak.html 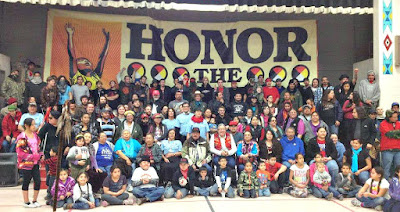 Now, following the long fight to protect their aquifer from the threat of the dirty tarsands Keystone XL pipeline, Lakotas are celebrating as President Obama just announced rejection of the tarsands pipeline from Canada.
Wioweya Najin Win, Debra White Plume, said, "Such great news!  Wopila to all of Earth's Army.  President Obama is standing in the way of something bad coming towards the people.  He put his Moccasins on the Ground!  Our ancestors are with us and we are all so thankful for the protection of Sacred water."
During the long pipeline battle, White Plume said, “The KXL proposed route you are considering would not only be insanely located over the Ogllala Aquifer, it would also recklessly cross many surface waters, including the Missouri River and the Cheyenne River. All of this is sacredwater, we say Mni Wicozani, through water there is life. Without water there is no life.”
Read the full statement from Owe Aku International Justice Project:
http://bsnorrell.blogspot.com/2015/11/owe-aku-grassroots-activism-kills.html

what does "reject" mean? put off and stall a decision (or a vetoe) until next year or next year's election?

is there an actual VETO signed on paper that states officially keystone is 'rejected'
FOR GOOD, FOREVER?

the 'administration' can say anything they wish to appease the public,
what happens behind the scenes is another. verify, third-party verify.
publicly demand an official document declaring that keystone project
is nullified and DEAD for good and CAN not be REVIVED IN THIS LIFE AGAIN. otherwise, a show.


as for non-natives, the 'administration' is still no good (to put it, at the least) and
destructive to true freedom and public governance. out with the
old guards, and in with the return of public sovereignty.

peace, liberation, renewal, justice not just for one, but
for the world in the fifth world.

A win is a win

Don't understand why Indians always end up celebrating too early, just like with the AZ H2O issues & Mohave coal plant here in AZ a few years ago. Folks celebrated, calling the issues are dead, but these issues still exist and haunt us:
Seeing energy issues here, big mountain / black mesa / 4 corners, nothing is ever "killed" and only put on hold. Absolutely, "Reject," is used in the context of politics for the 'public. I think 'reject' means a major reassessments that need to be made, corporate and political wise, to determine alternative and future-feasible methods of transmission. Out here, coal slurry pipeline and 12 deep aquifer Wells are still in place (i.e. Mohave & Black Mesa Mine), Mohave coal plant is there with rumors, black mesa mine is now oak ridge mine, and the clearing out of humans for the near future South Mesa mine complex is still happening. --WE have to consume! What would happen if there were no more cities, no petro for our 1 person per Car Culture and fresh foods in the refrigerators? We are still being tested with our actions and movements, as elders of the Longest Walk 1978 said, "The Red Road will be our next great test, we may fail or maybe not..."