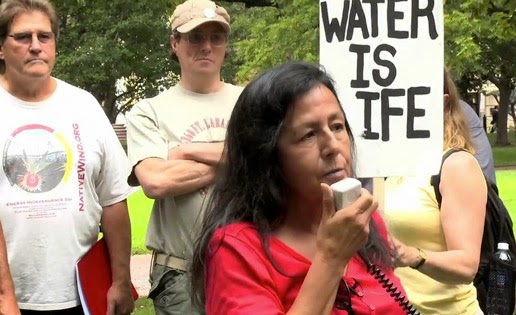 "Crying Earth Rise Up" tells the story of two women who resolve to uncover the human cost of uranium mining and its impact on sacred water. Debra White Plume is a Lakota grandmother and tireless leader in the fight to protect her people's water and land from corporate polluters. Debra is the lead plaintiff in a case challenging uranium mining on Lakota treaty territory. Elisha Yellow Thunder intimately understands the dangers of contaminated water. A young mother and a geology student, she unknowingly drank water with high levels of radiation while pregnant with her first daughter, whose severe medical anomalies are life-threatening. "Crying Earth Rise Up" documents the growing movement of native and non-native people of the Great Plains in their battle to stop the expansion of uranium mining.
at February 03, 2015 No comments:

Please post and distribute. Nia:wen.
MNN. Feb. 2, 2015. At the recent meeting with the Mohawk Council of Kahnawake Inc. to object to the attempted illegal expropriation of our Kahnion’ke:haka land known as the “Seigneury”, Chief Mike Delisle said, “You won’t be forced to leave!” Permits will be given out by the provincial government to multinational corporations to build pipelines, railways, highways and canals throughout Kahnawake to transport oil and resources from the West. Living conditions will become unbearable. We will be criminalized and sued for resisting for millions. Oil company sued town. Our land will be grabbed. We will be relocated out of everybody’s way!

God bless America …
We don’t owe China any money. Our land is not for sale. US President Obama is offering to pay off the Wall Street bankers’ debt to China with stolen Ongwe’hon:weh land. Read:: Ongwe’hon:weh land to pay Chinese debt. Our land and resources will be illegally used as collateral. Proposed Chinese development zones with Chinese workers will be set up in the middle of Ono’ware:geh [Great Turtle Island]. China will be given ownership of U.S. businesses and U.S. infrastructure guaranteed by the U.S. government.

Our land cannot be converted to fiat currency according to the Kaia’nereh:kowa. Our real estate is the only real asset the US government is clinging to. If China wants to collect their debt they can put USA Inc. into collections.
The proposed area will be near the North American Free Trade Agreement super ‘autobahn’. It’s a private toll road to be protected by private military forces, stretching from Mexico to Canada to transport resources, troops and weaponry.

NAFTA autobahn.
The Northeast route is supposed to be along the Great Lakes and St. Lawrence River through all Haudenosaunee communities. Eviction notices have already been given out in Kahnawake to select people who have been ordered to leave. Read: MNN 1970 – NAFTA Autobahn Mexico to Canada.
Pink Floyds sings to the Mohawk Council of Kahnawake Inc: “Hello? Is there anybody in there? Just nod if you can hear me. Is there anyone at home?” Hey, MCK Inc., come join us in the small condolence.