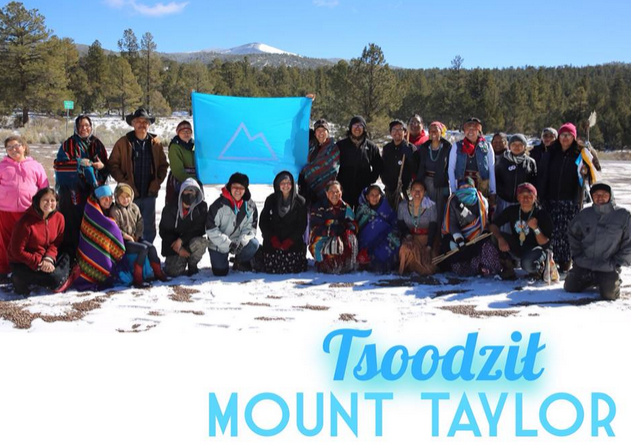 A moment of prayer....
A few seconds of silence,
To the reverence of life.. so few wish to embrace.
Shi K'é, give of your body.. With all the spirit of your mind, and pray for the Mother Earth beneath.... Your aching feet. Take this moment for your own silent thoughts.
Many thanks and blessings to all who believed! We couldn't have done it without your love, encouragement and prayers.
Tsoodził received us with beams of life, guidance, love and hope.
Our next journey will begin on March 21st, the first day of the spring equinox. From Tsodził, to Dook'oo'slííd.

Thank you to the walkers for walking, and sharing photos with Censored News!

Please post and distribute. Thank you.
MNN. Feb. 4, 2015. To scare us Prime Minister Harper says we are at war with the Islamic State!! That “a great evil has been descending over our world”. Does he mean himself? That shoot out on Parliament Hill really scared him even though it was a false flag. To “protect” himself he’s turning spy agency CSIS into a secret police force, like the Gestapo.

Harper: “No more ‘nays’ to my anti-terror bill?”
Harper, with his non-existent foresight, will decide the threats to himself and to corporate rule. INDIANS, environmentalists and anyone can be construed as terrorists. The bill protects the corporate theft of our resources. He will decide what are espionage, interference, terrorism and who appears to undermine his authority. It has nothing to do with Jihadists.
Intelligence-gathering was separated from police work 30 years ago when the RCMP routinely breached the law and civil rights. Now CSIS can do it all. Agents can break into someone’s home, seize and copy documents, install, maintain or remove any thing, like computers and monitoring devices, or do what a judge thinks is “reasonable”. Those questioning them or resisting their law breaking can be arrested and face 5 years in jail. Internet providers are installing interception systems to collect user data, give it to the government, who will take whatever information they want without warrants. The anti-terror law is a blanket law to do as they please, like the US Patriot Act. They don’t need a reason to stop you and can jail you for as long as they want in their private prisons.
CSIS secret intelligence service is being given Nazi storm trooper powers to stop and punish opposition. Canadians are being encouraged to report critics of government policy. Without being charged, their civil rights will be suspended and they will be sent to private concentration camps.

Those who discuss or think about terrorism “in general” will be criminalized. Why does the home invading CSIS [Gestapo] have no oversight?
In 1933 after the “false flag” Reichstag Fire Hitler passed the Enabling Act. Like Harper, he made his own laws, set up the Gestapo, banned trade unions and opposition parties. He declared himself the Fuhrer and eliminated democracy. He promised that his totalitarian powers would be for a short while until he carries out the necessary measures, without saying what those are. Harper is following the blueprint that Hitler left. He’s showing the world that Canada is a corporate fascist dictatorship.

Henh! Our drums speak. Will they go to jail?
Those fascist laws apply only to their corporate citizens and incorporated INDIANS, who are in their Admiralty ship. Every band council’s job is to select the INDIAN inmates for their new concentration camps. We the natural people will always remain lawful and stay in our canoe.
Harper is singing about the enabling act, like the devil in the Stone’s song:“Stuck around St. Petersburg when I saw it was time for a change. Killed the Czar and his ministers, Anastasia screamed in vain. I rode a tank in a general’s rank, when the blitzkrieg raged and the bodies stank.”
MNN Mohawk Nation News kahentinetha2@yahoo.com or more news, books, workshops, to donate and sign up for MNN newsletters, go towww.mohawknationnews.com  More stories at MNN Archives.  Address:  Box 991, Kahnawake [Quebec, Canada] J0L thahoketoteh@hotmail.com for original Mohawk music visit thahoketoteh.ws
Harper’s new anti-terror bill.
Anti-terror law threatens basic freedoms.
US Patriot Act.
at February 04, 2015 No comments:

. People vs. Fossil Fuels Mobilization Concludes with Youth-Led Civil Disobedience at the Capitol; 90 Arrested At Capitol; Total Arrests at ...

At a peaceful sit-in at Biden's Gate, Native Women Arrested on Monday

Apache Stronghold is traveling through Arizona and California communities this week.