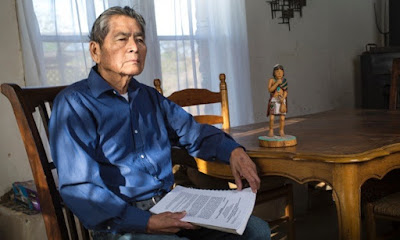 Vernon Masayesva, the former chairman of the Hopi tribe and founder and director of the Black Mesa Trust. Photograph: Sam A Minkler

By Vernon Masayesva
Censored News
Letter to the Editor
Former Chairmen: Ben Nuvamsa, Ivan Sidney, and Former Vice Chairmen: Phillip Quotshytewa Sr., Clifford Quotsakwahu, Caleb Johnson others wrote a letter to the Hopi Tribal Council on November 12, 2012 rejecting the Senate Bill 2109 sponsored by Former Senator Jon Kyle. Copies of the letter were sent to Arizona congressional delegation, DOI Secretary Ken Salazar and Assistant Secretary of Indian Affairs, Kevin Washburn.
Subsequently leaders of Shungopavi, Hotevilla, Lower Moencopi, Bacavi, Kykotsmovi, Walpi, First Mesa Consolidated Villages and Mishongnovi adopted resolutions to reject Kyle Bill S 2109.ku
Then on June 15, 2012 at a Council meeting held at Hotevilla the Council voted to reject Kyle Bill SB 2109. Voting to kill Kyle Bill were; Herman Honanie, David Pecusa, Gayver Puhuyesva, Nada Talaqyuimptewa, Carlene Quotskuyva, Rebekah Masayesva, Danny Honanie, Bruce Fredericks, Leroy Sumatskuku, Wayne Kuwanhoyouma, and Danny Humetewa. Voted for the Kyle Bill were Alph Secakuku, Cedric Kuwaninvaya and George Mase with Chairman Leroy Shingoitewa presiding and not voting.
The Kyle Little Colorado Rights Water Settlement Bill, which if it had passed, would have allowed all non-water users to keep using the water they presently now use. What is left over will go to Navajo Nation, and not one drop will go to Hopi.
Hopi Tribal Council and Chairman without consulting with villages have agreed to resume settlement negotiation against the will of the village they represent.
We, the Hopi and Tewa people, demand and have a right to know why council decided to resume negotiations. Until a meeting is held, ALL settlement negotiations must end.
Vernon Masayesva
Cc: Hopi Tribal Council
Hopi Village Community Offices Executive Director
Vernon Masayesva
http://www.blackmesatrust.org/?page_id=19
Vernon Masayesva is the Executive Director of Black Mesa Trust, a Hopi Leader of the Coyote Clan and a former Chairman of the Hopi Tribal Council from the village of Hotevilla, one of the oldest continuously inhabited human settlement in the Americas in Arizona.
Masayesva received his B.A. degree from Arizona State University in Political Science and a Masters of Arts from Central Michigan University in 1970. He returned to Black Mesa of the Hotevilla Bacavi Community School, the first Indian controlled school on Hopi as the lead educator of the school systems. In 1984, he was elected to the Hopi Tribal Council and then served as Chairman from 1989. He immersed himself in the tangled intricacies of the mining on Black Mesa and the Hopi – Navajo land dispute, and is widely respected on and off the reservation.
In 1998, he founded the Black Mesa Trust and currently serves as its Executive Director. Vernon is an international speaker on the subject of Water and is honored among many scientists, physicists and water researchers including renown author and water researcher Dr. Masaru Emoto from Japan.  Among other things, he is beginning a serious study of Hopi symbols and metaphors to understand who he is and what he can do to help his people lay a vision of a future Hopi society. As a result of his commitment to preserving our water, former President William Clinton honored him as an “Environmental Hero.” Charles Wilkinson, a distinguished Professor of Law at the University of Colorado said, “You will gain a strong sense of history, of millennia, from listening to Vernon, but my guess is you will also see something else-the future-for Vernon embodies personal qualities and philosophical attitudes that can serve our whole society well in the challenging years that lie ahead.”
To learn more about Black Mesa Trust visit www.blackmesatrust.org