From Vallarta with Love: A Video from Mothers of the Disappeared 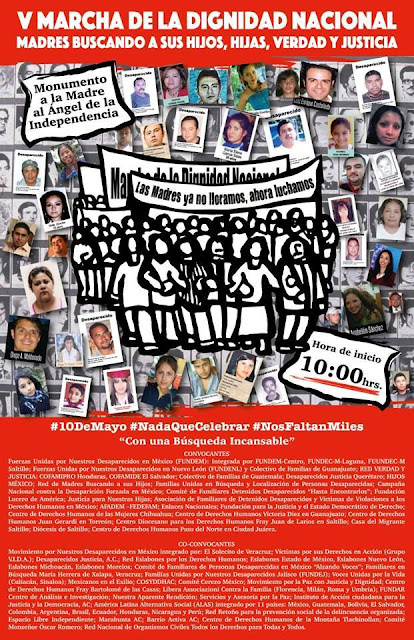 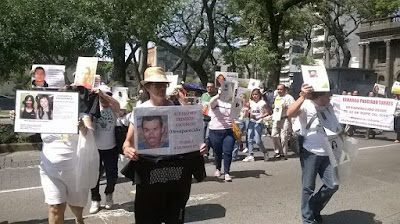 Peaceful demonstration in the park red on the 26th of July of 2015, in Guadalajara, Jalisco, Mexico. Please help to bring them back home.


Women's/Human Rights News
From Vallarta with Love: A Video from Mothers of the Disappeared

By Frontera NorteSur
Published with permission at Censored News
May 9, 2016

In Mexico, Tuesday, May 10, is Mother's Day. On that day, mothers from the civil society organization United Families for Our Disappeared of Jalisco will join mothers from across the country in a national demonstration in Mexico City demanding governmental action in locating their missing loved ones and calling for the passage of a national law on forced disappearance, which has been hamstrung in the Mexican Senate.

For the fifth year in a row, relatives of the disappeared will gather on the morning of May 10 at Mexico City's Monument of the Mother united by the slogan "Mothers searching for their sons and daughters, truth and justice."

Among the persons who will be present in spirit this year is Erika Berenice Cueto, a pole fitness instructor from Puerto Vallarta, Jalisco, who disappeared in November 2014 at the age of 39 and remains missing to this day.

Like thousands of other families in Mexico, Erika's family members have suffered not only pain and depression, but have struggled against the winds to maintain their own livelihoods while experiencing a devastating letdown in the ability of the authorities to find their loved one. Another big obstacle in getting to the truth behind Erika's disappearance is public fear, according to one of Erika's relatives.

"The government doesn't have the will the encounter our disappeared," the relative told FNS. "It's difficult. Despite the passage of time, we struggle to find her with our own resources and pressure the government. The people are afraid."

A well-known and even beloved denizen of Puerto Vallarta, Erika Cueto is now among cases of missing persons on file with the Office of the Federal Attorney General as well as a new unit from the Jalisco state attorney general's office established to investigate the cases of disappeared persons in Puerto Vallarta. Her relative said new state law enforcement officials have been more open and willing to meet with the family in recent months, "but there are no leads…there is nothing."

Estimating 3,000  people are disappeared in the state of Jalisco alone (other sources place the total number of disappeared people in Mexico at 27,000-plus), the relative contended that the agencies tasked with investigating disappearances both at the federal and state levels are also horribly underfunded and understaffed.

"It's not only former city council rep Humberto Gomez Arevalo, or Erika Cueto the dance instructor, or (lawyer) Miriam Patricia Almanza, the three most emblematic cases of the city. The list is longer and relatives and friends keep searching and hoping that their loved ones return to their homes…"

A video of Erika Cueto was posted this year on the Facebook dedicated to her. While the images portray an energetic young woman who vanished from Puerto Vallarta one day in the prime of her life, the heart-felt and poetic sentiments expressed in the English subtitles of the video are intimately familiar to many, many mothers in Mexico and around the world who continue searching for their daughters and sons this Mother's Day and every day of the year.