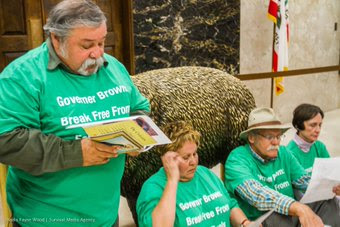 Governor Jerry Brown has become infamous for spouting off about "climate change" and "green energy" at international climate conferences as he promotes environmentally destructive policies, including fracking,  pollution trading and R.E.D.D. and the salmon-killing Delta Tunnels, back at home.


Three protesters from Kern County are apparently tired of Governor Brown's green rhetoric and pro-Big Oil actions and are currently conducting a sit-in outside of Governor Jerry Brown's offices in the State Capitol as part of "Break Free," a global wave of actions to keep fossil fuels in the ground.
Farmers, nurses, and environmental justice activists alike traveled from California's Central Valley to participate in this peaceful, nonviolent protest, according to a joint news release from the Center on Race, Poverty and the Environment (CRPE) and 350.org.

"Around thirty residents from Kern County joined in solidarity and prayer, invoking the revolutionary spirit of Cinco De Mayo," the groups said. "The action targeted Governor Brown, who has denied numerous requests to visit the Central Valley and address the mostly Latino and farmworker communities dealing with the health impacts of oil and gas drilling (including hydraulic fracturing)."
According to a report, Jerry Brown is now in the building and has yet to greet the residents to join them in prayer.
"Governor Brown wants the world to think he is a 'climate leader,' but here in California we know that's not the whole story," emphasied Juan Flores, a Kern County community leader protesting at the Capitol. "Here in my town of Shafter, fracking is contaminating our water, our food, and our kids' hopes for a healthy future. Governor Brown has the authority to ban dangerous drilling and protect our communities – but so far, he's refused to act for the people he represents."
"Governor Brown has been invited to the Valley to see the impacts of the oil industry numerous times," said Lupe Martinez, a former United Farmworkers Union (UFW) leader who also participated in civil disobediences to pressure Governor Brown to sign the Agricultural Labor Relations Act (ALRA) in 1975. "He needs to understand the devastating human impacts of extraction and meet this critical moment with action. His job is not to serve the oil industry, his job is to serve the people of the Central Valley and all Californians."
"California represents itself to the world as a shining example of climate leadership, all the while we're the third largest oil producing state in the U.S.," said Linda Capato Jr., Fracking Campaign Coordinator at 350.org, pointing the dichotomy between the state government's words and actions."The actions here in California and around the globe are meant to signal that the era of fossil fuels must come to an end."
"Jerry Brown, we welcome you to come out of your office and join the prayer," she said.
Rebecca Kaplan, Councilmember At-Large of Oakland said, "I'm proud today to be in solidarity with the important coalition taking action to end fracking. We have learned from recent scientific reports, that climate change is happening faster and worse than previously believed."
"We must end fracking in California. For the sake of the health of the community and for the livable future," she concluded.
A similar protest will take place in Los Angeles on May 14, according to the environmental justice advocates. Residents from South L.A. are marching to demand that the state's elected leaders put an end to neighborhood drilling and the oil and gas extraction threatening California's health, communities, and climate.
"Fracking is booming in California's low income, rural communities, who are already overburdened by poor air and water quality issues," the news release stated.  "Residents from Kern and Los Angeles counties are calling out dangerous extraction techniques that impact our water sources and climate, and Governor Brown's lack of leadership on these climate and health issues. The Governor's support for the oil industry and these dangerous extraction techniques are indicative of where he really stands on climate change and the communities on the frontlines."
"California has all the creativity, technology and desire to lead the world into the future and embrace 100% clean energy. All we need now is a commitment from our leaders to achieve this goal," the release said.
Followers are voicing their support on social media [#StandwithKern and #BreakFree2016] calling on California's elected leaders to join in breaking free from fossil fuels, or else remain bound to the wrong side of history.
For more for information, go to www.crpe-ej.org. or 350.org.
MEDIA CONTACTS:
Juan Flores, Center on Race, Poverty and the Environment, crpe-ej.org, (661) 709-2292
Madeline Stano, Center on Race, Poverty and the Environment, crpe-ej.org, (510) 821-4764