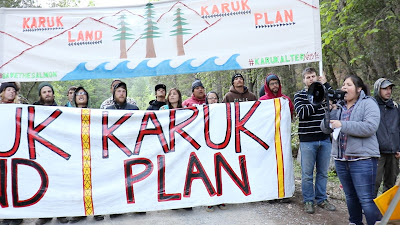 The Westside Salvage Logging Project would clear cut more than 5,700 acres on steep slopes above Klamath River tributaries and along 320 miles of roads within Klamath National Forest. Post-fire logging and hauling began in late April, before legal claims brought forth by a lawsuit led by the Karuk Tribe could be considered in court.

"The Forest Service should follow the Karuk Plan on Karuk Land. Traditional knowledge of fire helps everything stay in balance because it's all intertwined," said Dania Rose Colegrove of the Klamath Justice Coalition. "When you destroy the forests, you destroy the rivers."

Unlike the Karuk Alternative, the Westside plan calls for clear cut logging on steep slopes right above several of the Klamath River's most important salmon-bearing streams, at a time when returning salmon numbers are reaching record lows. Members of local Tribal youth councils who participated in today's protest see Westside salvage logging as a threat to their future.

"Today I showed up and stood up for what is right for future generations," said Lacey Jackson, a 16-year old Hoopa Tribal Youth Council member.  "My cultural and traditional livelihood is being threatened, and the way they are going about this logging is a big part of that. I will continue to stand up for me, my people and future generations."